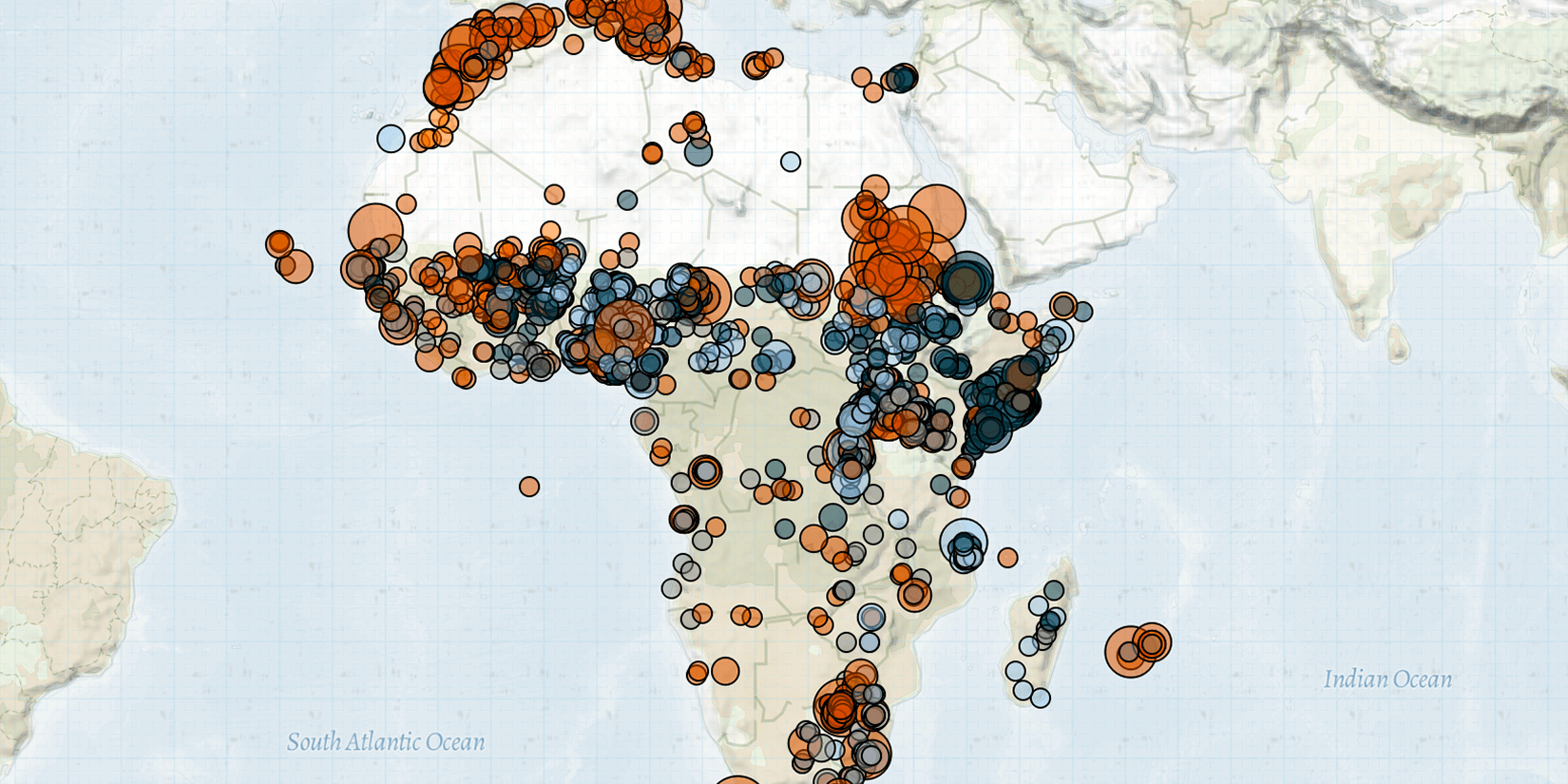 Last week in Africa, a suspected coup was attempted in Guinea-Bissau; the Cooperative for the Development of Congo (CODECO) carried out a high fatality attack against displaced people in the Democratic Republic of Congo; violence surged in Kenya following raids from suspected Pokot militias; and Jama’at Nusrat al-Islam wal-Muslimin (JNIM) was the most active armed group in Western Africa.

In Burkina Faso, military forces conducted widespread airstrikes against Islamist militants in the Cascades, Center-East, Center-North, East, Sahel, and Southwest regions. IEDs planted by JNIM in the Cascades and Southwest targeted soldiers and volunteer fighters (VDP). JNIM expanded operations into the Center-East region by attacking the Ouarweogo mining site, leaving several casualties among police and setting buildings ablaze. Further, violence in the Cascades region increased 167% last week relative to the past month, according to ACLED’s Subnational Surge Tracker, and a sharp resurgence of militant activities resumed in the Center-East region after a more than two-year hiatus. JNIM pursued its campaign of targeting infrastructure by sabotaging the telecom network, looting and vandalizing schools, and stealing vehicles from health and construction workers.

In Mali, the state’s military continued operations in the Gao, Mopti and Segou regions against Islamist militants, with further airstrikes near Songo where JNIM militants ambushed Malian forces. Notably, Malian forces received support from both French and Estonian Takuba forces, clashing with Islamic State West Africa (ISWAP) Greater Sahara faction militants between Gao and Menaka. As in Burkina Faso, JNIM and ISWAP Greater Sahara faction militants also clashed against one another in the Gao region.

In Niger, presumed ISWAP Greater Sahara faction militants carried out a series of attacks on villages in the Tillaberi region, which resulted in several civilian fatalities and stolen livestock. Nigerien state forces repelled an attack by ISWAP Lake Chad faction militants in Chetima Wangou, killing several militants and seizing vehicles. In the Maradi region close to Nigeria, armed gunmen also carried out a series of attacks and kidnappings.

In Nigeria, the air forces bombarded ISWAP camps in Borno state and local militias in Katsina, resulting in several militant fatalities and destruction of infrastructure. Nigerian troops and the Civilian Joint Task Force (CJTF) were hit with IEDs, killing a CJTF commander. Political disorder peaked in Niger state following a string of attacks against civilians by gunmen in the Paikoro and Muya local government areas. Violence increased in Niger state by 167% last week relative to the past month as flagged by ACLED’s Subnational Surge Tracker. Internal political party rivalries and competition between parties also spilled over into mob attacks on campaigns, party offices and political meetings of the PDP and APC around Abuja, Gombe, and Osun.

Following a recent spate of coups in Western Africa, a heavily armed group clashed against government security forces during a suspected coup attempt in the capital of Guinea-Bissau. The gunfire erupted near the Palace of Government, where the country’s president was reportedly holding a cabinet meeting, resulting in 11 fatalities.

In the Democratic Republic of Congo, the ‘State of Siege’ operation was extended for another fifteen days in the provinces of North Kivu and Ituri. In Ituri, presumed rebels of the Cooperative for Development of Congo (CODECO) killed and wounded dozens of displaced people in Djugu territory following a discernible trend of attacks against refugee camps in this area since November. The Ugandan armed forces also established a new base in the Irumu territory of Ituri. In North Kivu province, the Allied Democratic Forces (ADF) attacked civilians and security forces near the Ugandan border in Beni territory. Clashes also broke out in Uvira territory in South Kivu where the Congolese army (FARDC) killed several members of the Resistance to the Rule of Law in Burundi (RED-Tabara) and their allies following clashes in January.

In South Sudan, unknown militiamen attacked a large group of cattle traders and soldiers between Uror and Twic East counties in western Jonglei state, resulting in multiple killings. Elsewhere, attacks and abductions increased in Eastern Equatoria state, following the torching of a village in Torist county. While the assailants’ identity is unknown, the local reporting of these incidents is being framed as Bor Dinka attacks, coinciding with escalating tensions between Bor Dinka pastoralists from Jonglei state and sedentary groups in Eastern Equatoria.

In neighboring Sudan, protests against military rule continued nationwide, with casualties and arrests in Khartoum and El Fasher. Elsewhere, an attack by armed men near the Lazar mine in South Kordofan left several people killed and others injured.

In Somalia, Al Shabaab militants attacked security force operations in the Banadir region, leaving several police officers dead in Mogadishu, including a commander. This violence by Al Shabaab follows a pattern of assassinations observed in this area since January. In Lower Shabelle, Somali special forces conducted an operation against al Shabaab hideouts. In the meantime, IED attacks by Al Shabaab militants in the Lower Jubba region of Southern Somalia and the Wajir and Mandera counties of nearby Kenya left dozens of civilian casualties. Attacks increased by suspected Pokot militants in the Baringo, Laikipia, and Turkana counties against police and pastoralists resulted in several fatalities and hundreds of livestock stolen. These trends contributed to the 69% increase in violence in Kenya last week relative to the past month that is flagged by ACLED’s Conflict Change Map.