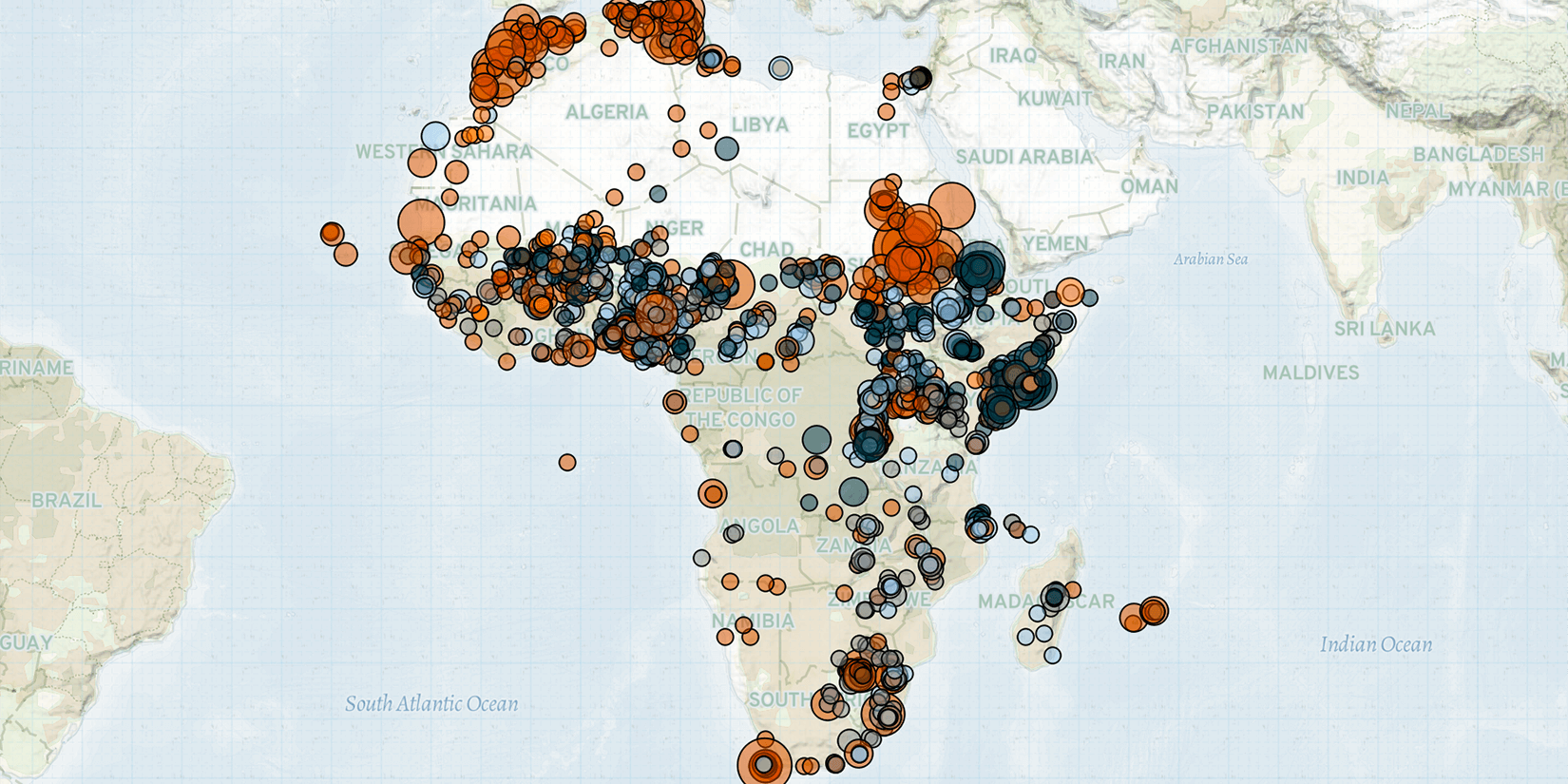 In Burkina Faso, Jama’at Nusrat al-Islam wal-Muslimin (JNIM) carried out the first reported militant attack in Passore province involving clashes with local police, along with deadly IED attacks in the Centre-Nord, Nord, and Sahel regions. State forces began operations against JNIM in the Nord region, killing several militants and targeting militant bases with artillery fire. The Islamic State West Africa Province (ISWAP) Greater Sahara faction violence continued in the Centre-Nord and Sahel regions despite airstrikes by military forces in Namentenga and Seno provinces. The Sahel and Nord regions recorded the most political disorder events, which contributed to the 27% increase in violence in Burkina Faso last week relative to the past month flagged by ACLED’s Conflict Change Map. The leader of the military junta Patriotic Movement for Safeguarding and Restoration (MPSR), Paul-Henri Sandaogo Damiba, was inaugurated as president after taking oath at the constitutional council (Jeune Afrique, 16 February 2022).

In Mali, France and European allies announced a withdrawal from Mali, with junta-led Malian authorities calling for the immediate departure of Barkhane and Takuba forces (RFI, 17 February 2022). However, Niger agreed to host the departing European troops for redeployment elsewhere in the region (Reuters, 18 February 2022). In addition, the ISWAP Greater Sahara faction militants returned to Tessit area of Gao region after being pushed out by JNIM the previous week, leaving around 100 fatalities following ISWAP attacks on civilians and clashes with military forces. These trends contributed to the 167% increase in violence in Gao last week relative to the past month flagged by ACLED’s Subnational Surge Tracker.

In Niger, ISWAP Greater Sahara faction clashed with state forces and local militias in the northern Tillaberi region. Further south in Gotheye, an army unit suffered a deadly IED attack by JNIM.  A group of Fulani civilians, including children, were killed by a rare Nigerian military airstrike in the Madarounfa area of Maradi region

In Nigeria, political parties and factions demonstrated over preferred leadership, with violence breaking out as the gubernatorial elections approach in Osun state (Premium Times Nigeria, 16 June 2021). While violence in Osun has not been common, it has become increasingly volatile, resulting in a shift from a place of ‘low risk’ to being considered an area of ‘growing risk’ by ACLED’s Volatility and Risk Predictability Index. ISWAP Lake Chad faction militants planted an IED near Gajibo in Borno state, striking the governor’s convoy. The governor survived, but two Civilian Joint Task Force (CJTF) were killed in the explosion. Military offensives throughout the northwest continued, with political disorder peaking in Kaduna state and airstrikes against gunmen in Katsina state resulting in scores of fatalities. This violence contributed to the 27% increase in violence in Nigeria last month relative to the past year flagged by ACLED’s Conflict Change Map, which first warned of increased violence to come in the country last month.

In the Democratic Republic of Congo, the Congolese army (FARDC) continued to clash against the Allied Democratic Forces (ADF) in North Kivu following a series of incursions by the rebels in the Watalinga sector of Beni territory. This border area near Uganda has been attacked by the ADF several times since the beginning of February. In Ituri, the Cooperative for Development of Congo (CODECO) attacked a military position and killed scores of civilians in the Banyali-Kilo sector of Djugu territory. In response, civil society members erected barricades and set houses alight during a demonstration, killing a civilian inside. Elsewhere, in the South Kivu province, a refugee camp was attacked by the Mayi Mayi Yakutumba and the Resistance to the Rule of Law in Burundi (RED-Tabara), resulting in a clash against the FARDC, during which more than a dozen militiamen were killed.

In Kenya, cattle raiding incidents continued in the larger Kerio valley region, with presumed Pokot militiamen attacking multiple counties, including Elgeyo Marakwet, Turkana, and Laikipia. This violence contributed to the 256% increase in violence in Kenya last month relative to the past year as noted by ACLED’s Conflict Change Map, which recently warned of increased violence. Elsewhere, in Lamu county, police forces defused an IED laid by Al Shabaab militants in Sankuri. This is the fourth IED attack carried out by the militants since the end of January. Meanwhile, ahead of party primaries scheduled in April, youths disrupted political rallies in Siaya county by using teargas canisters into the crowds, injuring several people.

In South Sudan, intercommunal violence continued in Unity state. Militias from Leer and Mayendit counties exchanged fire in Rubnor payam. In parallel, armed youths (presumed Ruweng) attacked civilians and raided cattle in Guit county, leading to clashes that resulted in over 20 fatalities. Following the events in Guit, residents demonstrated in Bentiu town, calling for protection against armed raiders in the area. During the event, security forces responded with live bullets, killing one and injuring others. The use of excessive violence by security forces during demonstrations was also observed in Sudan. As nationwide demonstrations against the military continued, two protesters were killed in Khartoum while several others were injured. Elsewhere in the country, looting was reported by militia groups in North Darfur amid escalating violence.