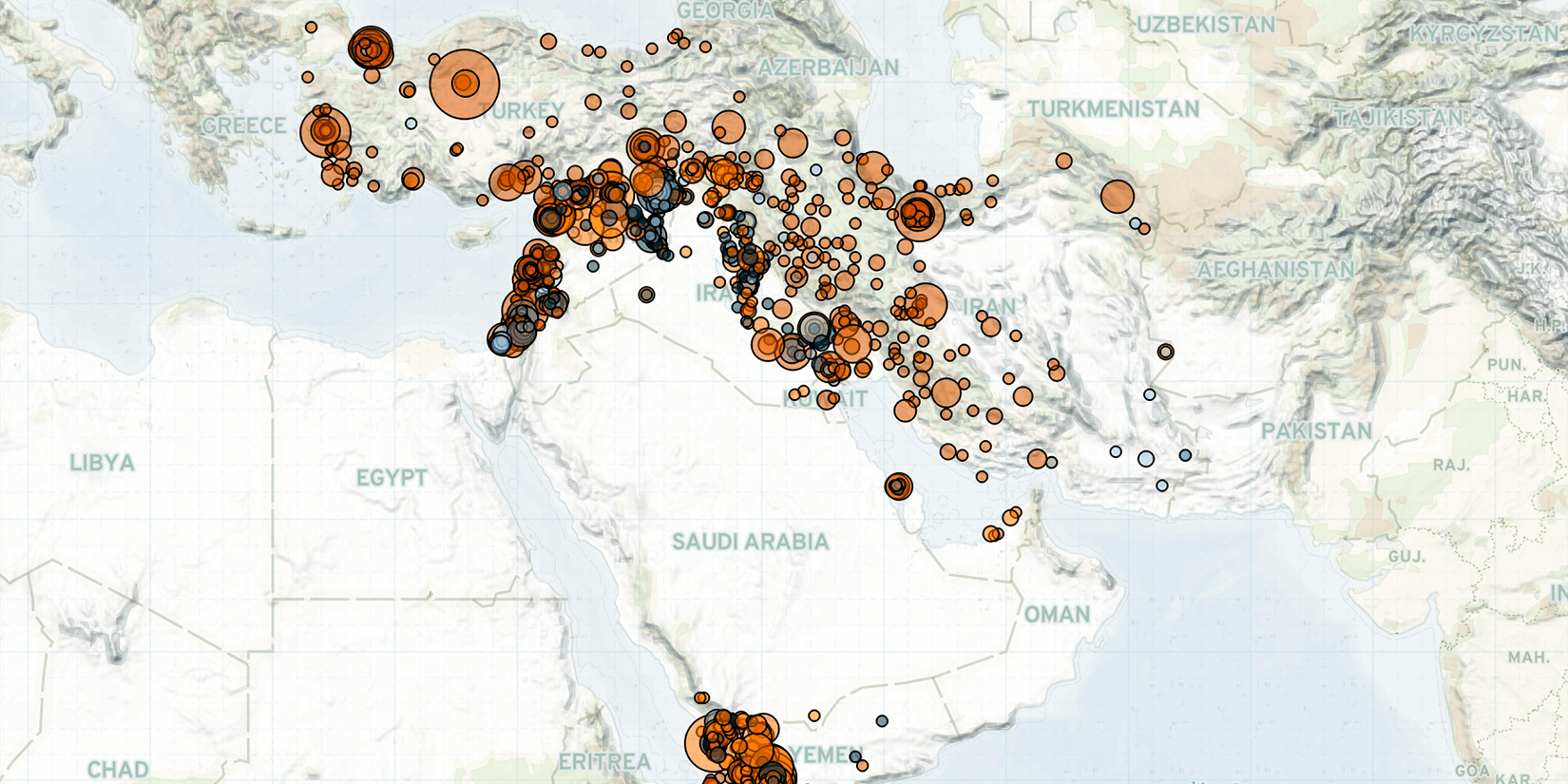 Last week in the Middle East, a Houthi drone attack injured civilians in Saudi Arabia, while no attacks were recorded in the United Arab Emirates (UAE) for the first time in four weeks. In Yemen, fighting raged in Hajjah governorate and decreased significantly in Marib governorate, while five UN staff were abducted in Abyan governorate. Southern Syria saw a spike in protests after the Syrian regime cut subsidies on fuel and essential goods. In Iraq, violence continued to rise last week in Maysan province, driven by assassinations and increased tribal clashes. In Palestine, Israeli forces killed three Palestinian gunmen in the West Bank, while unidentified Palestinian armed groups carried out two shooting attacks against Israeli forces. Lastly, in Turkey, dozens of protests broke out in response to electricity price hikes.

In Saudi Arabia, 12 civilians were injured by drone fragments when Saudi forces intercepted a Houthi drone attack on Abha airport on 10 February. In response to the attack, Saudi forces announced a military operation on Yemen’s capital Sanaa, asking civilians to evacuate civilian sites used by the Houthis for military purposes for the 72 hours following the attack (Saudi Press Agency, 10 February 2022).

In Yemen, sustained Saudi-led coalition airstrikes on and around Sanaa city continued at high rates last week, contributing to increases in violence of 344% and 516% in Amanat al Asimah and Sanaa governorates, respectively, last month relative to the past year flagged by ACLED’s Subnational Threat Tracker. The tracker first warned of increased violence to come in the governorates in the past month.

On the ground, political violence surged in Hajjah governorate, as pro-Hadi forces, supported by Saudi-led coalition air cover and Saudi ground troops, closed in on Houthi forces in Harad city last week. This resulted in a 433% increase in violence in Hajjah last week relative to the past month flagged by ACLED’s Subnational Surge Tracker, which first warned of the increased violence to come the week prior. Clashes between pro-Hadi and Houthi forces also took place in border areas of the neighboring Sadah governorate last week, where Saudi-led coalition airstrike events saw a significant increase.1Note that one airstrike event can include several airstrikes and that the number of airstrikes can greatly vary from one event to another. As ACLED is an event-based dataset, ACLED records airstrike events rather than airstrikes. This ensures consistency in the data, especially given the overall rare reporting on exact airstrike counts. In contrast, political violence in Marib governorate dropped last week to its lowest levels since November 2021. Notably, no clashes were reported between UAE-backed Giants Brigades and Houthi forces, in what could be the materialization of the redeployment the Giants Brigades announced last month.

Elsewhere in Yemen, unidentified gunmen abducted five UN employees in Abyan governorate on 10 February. The abductors, who Yemeni officials suspect to be affiliated with Al Qaeda in the Arabian Peninsula (AQAP), are reportedly asking for a ransom and the release of some militants held by the Hadi government (Associated Press, 12 February 2022). Earlier in the week, a suspected US drone strike targeted a vehicle carrying presumed AQAP militants in Marib governorate.

Elsewhere, violence broke out at the Hole Camp in Al Hasakeh province last week, with clashes between IS families and camp guards leaving five women and four children dead. Aid workers claim that this is the first time a camp guard has fatally shot a child (New York Times, 9 February 2022).

Similarly, in northern Iraq, Turkish airstrike events targeting the Kurdistan Workers’ Party (PKK) increased in Duhok and Erbil provinces. In contrast, such events decreased in Ninewa province, as the focus of the air campaign shifted from Sinjar district to Aqra district. While violence in Ninewa has been common, it has become increasingly volatile, resulting in a shift from a place of ‘consistent risk’ to being considered an area of ‘extreme risk’ by ACLED’s Volatility and Risk Predictability Index last week.

In Iraq, tribally-motivated violence remained high in Maysan province last week, with several assassinations also reported in Maysan. Tribal militias continued to clash with each other and local police in the Qalat Salih, Al Azair, and Kahla districts. Unknown militants also assassinated a judge involved in narcotics cases and a member of the Sadrist Peace Companies in Amara city. In response to the violence, Iraqi police declared a state of maximum security in Maysan province and sent large police deployments to Kahla district (Alsumaria, 10 February 2022). The increased number of events in Maysan contributed to 112% increase in violence last week relative to the past month flagged by ACLED’s Subnational Surge Tracker, which first warned of increased violence to come in Maysan in the past month.

Last week in Palestine, three Palestinian militants affiliated with the Al Aqsa Brigades – the armed wing of Fatah, which is the ruling party in the West Bank – were killed by Israeli military forces during a raid into Nablus city. Israeli forces entered the village in a vehicle with Palestinian license plates and opened fire on a vehicle carrying the militants. The militants were accused of carrying out multiple shooting attacks against Israeli settlers in the West Bank (Dunia Al Watan, 8 February 2022). The Palestinian Foreign Ministry has described the incident as “an ugly field execution” (Al Arabiya News, 8 February 2022).

Lastly, in Turkey, dozens of protest events condemning electricity price hikes of up to 127% took place last week (Al-Monitor, 11 February 2022). Protests were attended by opposition parties, leftist groups, and various labor organizations. Two of the most significant protests were held in Yuksekova and Kiziltepe, where thousands marched in protest of their latest utility bills, calling for the resignation of President Recep Tayyip Erdogan (ANF, 6 February 2022). During the protest in Kiziltepe, police forces intervened with water cannons and tear gas, and detained a number of protesters. The demonstrations come after inflation rates reached nearly 50% last month in the aftermath of a currency crash late in 2021 (Reuters, 10 February 2022). In response to the high inflation, Turkey’s government increased the minimum wage by 50%, though subsequently also raised the prices of gas and power, making it difficult for residents to make ends meet (Duvar, 10 February 2022).