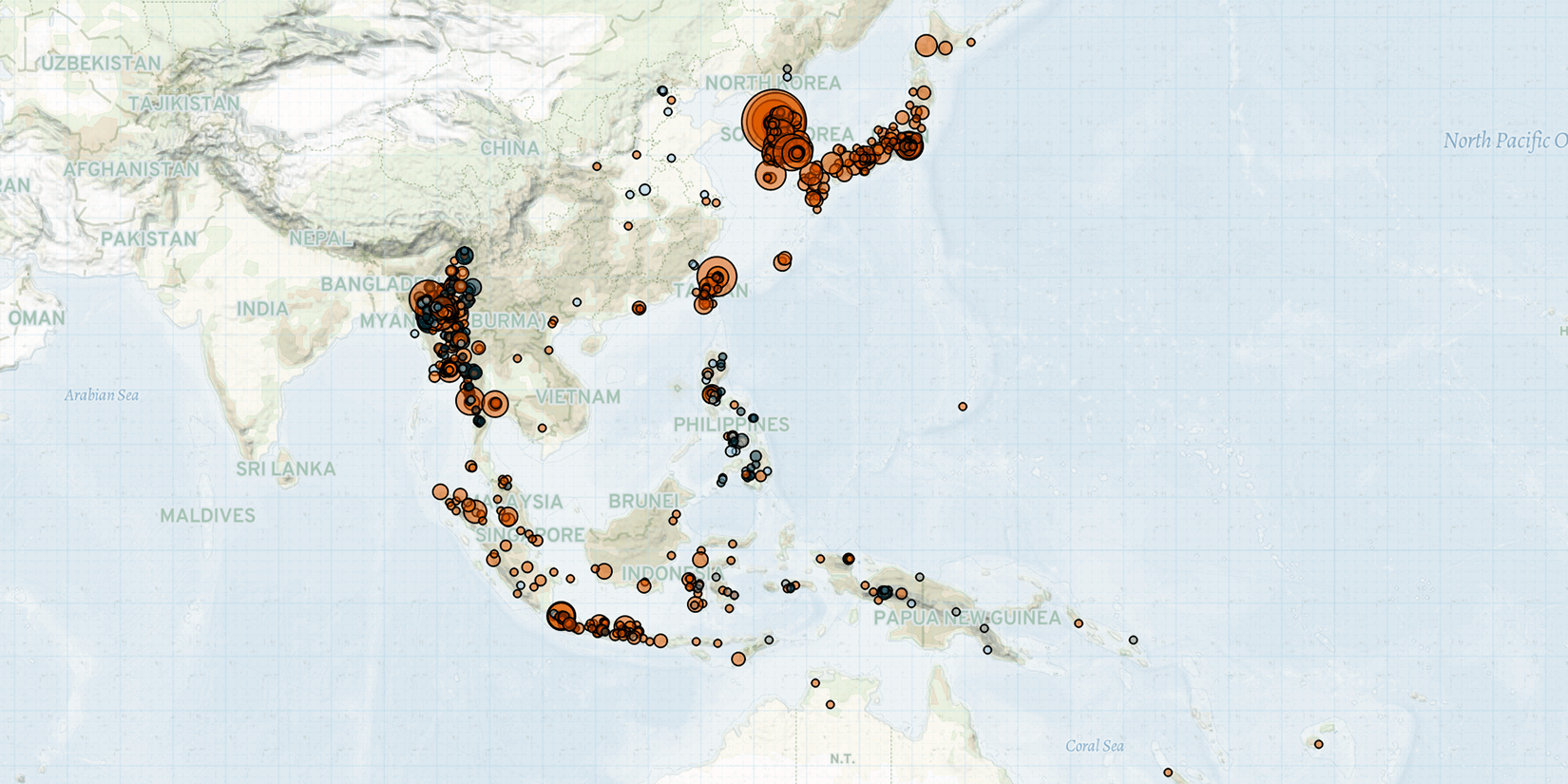 Last week in the East Asia Pacific region, the Myanmar military continued deadly crackdowns in the resistance stronghold of Sagaing region. Elsewhere, in Kayah state, heavy fighting between the military and Karenni resistance groups broke out, with dozens of military fatalities reported. North Korea conducted its ninth missile test of the year. In Indonesia, state forces killed an alleged Jemaah Islamiyah (JI) militant in Sukoharjo regency, Central Java province. In Thailand, a bomb attack by suspected Malay Muslim separatists was reported in Yala province. Rallies marking International Women’s Day were held across the region on 8 March. Meanwhile, pro-Ukraine demonstrations were held across the region in response to the ongoing Russian invasion of Ukraine, while one pro-Russia demonstration was recorded in Australia.

In Myanmar, the military continued to launch deadly crackdowns in the resistance stronghold of Yinmarbin township, Sagaing region last week. On 8 March, more than 150 soldiers raided Let Pan Taw village, firing small arms and heavy weapons in the village (Myanmar Now, 9 March 2022). The artillery shelling killed nine civilians. Later that day, military forces clashed with an alliance of six local defense forces, with casualties reported on both sides. The military and the military-backed militia Pyu Saw Htee also raided Thein Taw village in Khin-U township and clashed with a local People’s Defense Force (PDF) group. Eleven local PDF members were killed during the clash (Myanmar Now, 10 March 2022). Three civilians who were taken away from another village by the military on 7 March were found dead in Thein Taw village after the clash (Myanmar Now, 10 March 2022). According to ACLED’s Volatility and Predictability Index, Sagaing is considered an area of ‘extreme risk’ where violence is both common and highly volatile.

Elsewhere, in Kayah state, there was heavy fighting between the military and Karenni resistance groups in Demoso township over the weekend of 5 and 6 March. According to the Karenni resistance groups, several dozen military soldiers were killed during the weekend clashes (Irrawaddy, 7 March 2022). Some 700 military troops have reportedly been deployed to Demoso township since the beginning of March in an attempt to wrest control of Kayah state from resistance groups (Irrawaddy, 7 March 2022). ACLED’s Subnational Threat Tracker first warned of increased violence to come in Kayah in the past month. Violence in Kayah is both common and highly volatile; it is considered an area of ‘extreme risk’ by ACLED’s Volatility and Predictability Index.

On 5 March, North Korea test-fired a suspected ballistic missile from Sunan towards the ocean off its east coast. The test is the ninth missile launch this year (AP, 5 March 2022). North Korea insisted that it carried out the launch to test a camera system for a reconnaissance satellite (VOA, 10 March 2022). The launch came only days before the South Korean presidential election on 9 March and underscored ongoing challenges for the incoming South Korean government (Channel News Asia, 5 March 2022). Experts predict North Korea will carry out another missile launch ahead of the birthday of state founder Kim Il Sung on 15 April, and seek political leverage with the newly elected South Korean president (Al Jazeera, 5 March 2022; The Hankyoreh, 14 March 2022).

Last week in Indonesia, police forces from the counter-terrorism unit Detachment 88 (Densus 88) killed an alleged JI militant in Bendosari district, Sukoharjo regency, Central Java province. Densus 88 officers shot the man as he attempted to evade arrest, injuring two officers with his car (Kompas, 11 March 2022). According to state forces, the man was an adviser to JI’s leader (Benar News, 11 March 2022). The family of the alleged militant, however, denies the claim that he was associated with the Islamist extremist group (Benar News, 11 March 2022). JI was outlawed in 2008 and has not committed any major attack since 2011 (Benar News, 11 March 2022). This violence contributed to the 48% increase in violence in Indonesia last week relative to the past month flagged by ACLED’s Conflict Change Map, which first warned of increased violence to come in the country in the past month.

Meanwhile, ethnic Papuans demonstrated in several locations last week, including in Papua, West Papua, and Jakarta, against the proposed creation of new provinces in Papua. While demonstrations were mostly peaceful, outbreaks of violence between demonstrators and police were reported in Jayapura and Jakarta. The demonstrations were triggered by a recent meeting between the central and provincial authorities on the issue (Indonesian House of Representatives, 14 March 2022). A revised version of the Special Autonomy Law passed in 2021 gives the central government the power to carve out new provinces in the Papua region without the approval of local leaders (IPAC, 23 December 2021). Demonstrators claim that the creation of new provinces by the central government will not benefit the Papuan community, as it will give increased control to the central government (Suara Papua, 7 March 2022). Demonstrators also demanded an end to human rights violations in the region.

Meanwhile, in Thailand, suspected Malay Muslim separatists targeted a Thailand rangers’ armored patrol vehicle with explosives in Yala province last week, injuring four rangers in the vehicle and six civilians nearby. This is the tenth bomb explosion that has been attributed to Malay Muslim separatists in the southern provinces in 2022, six of which have occurred in Yala province.

Demonstrations marking International Women’s Day on 8 March were reported across the region, including in Australia, Indonesia, Japan, Malaysia, Mongolia, Myanmar, the Philippines, Taiwan, South Korea, and Thailand. Especially in South Korea, women’s groups and activists rallied across the country, ahead of the presidential election on 9 March, calling for gender equality. Women workers held a ‘Pay Me Too’ rally to criticize wage discrimination and demand better government management of the child care system. Gender equality and anti-feminist sentiments had been one of the most contentious issues in the 9 March South Korean presidential election, with incoming President Yoon Suk-yeol campaigning against the outgoing president’s feminist stance (The Diplomat, 10 March 2022).

Amid the ongoing Russian invasion of Ukraine, demonstrations in support of Ukraine were recorded in Indonesia, Malaysia, Japan, Mongolia, Taiwan, the Philippines, Australia, and South Korea last week. Meanwhile, one pro-Putin rally in support of Russian President Vladimir Putin was held in Sydney, Australia.