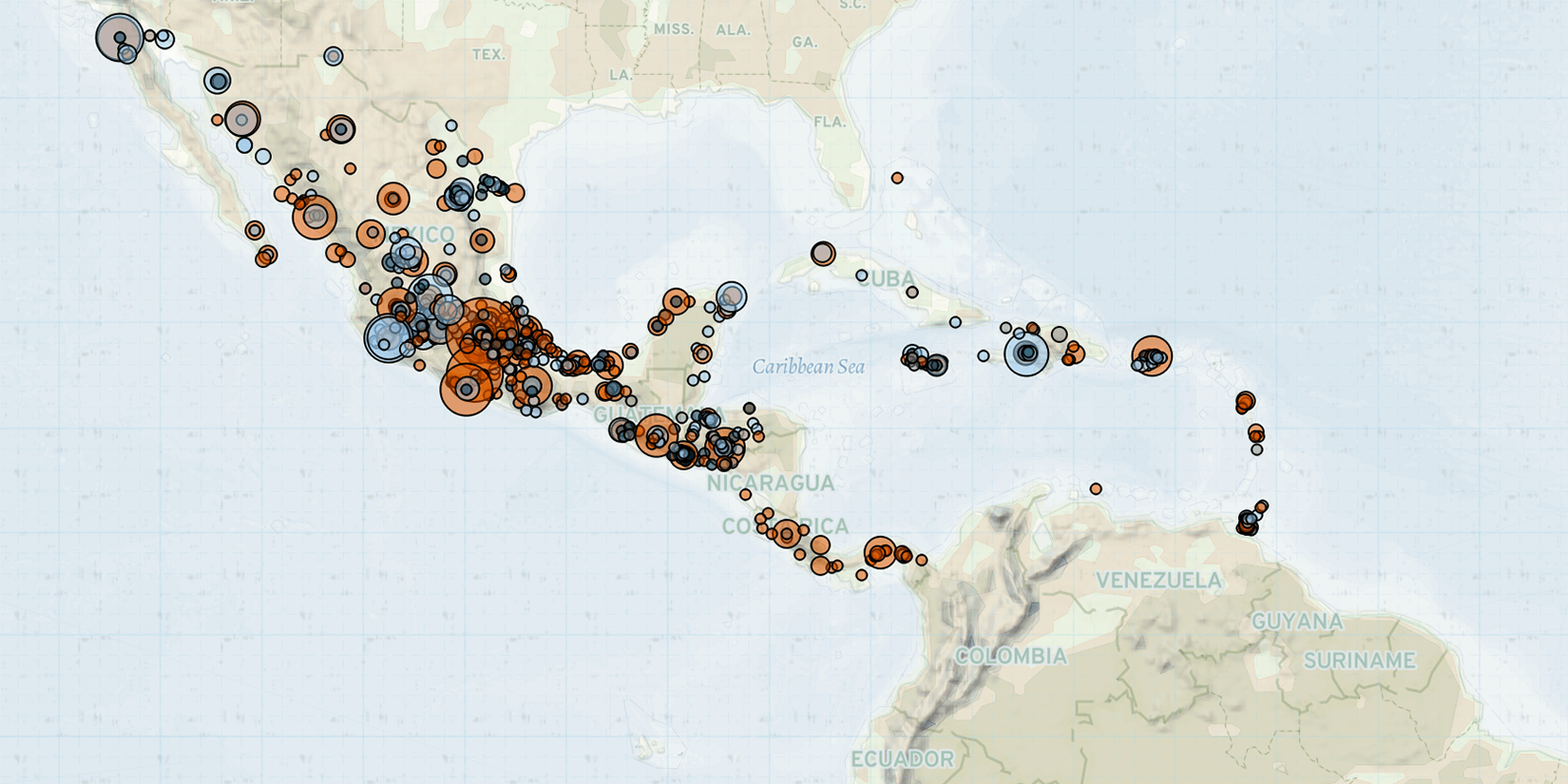 Last week in Mexico, Central America, and the Caribbean, demonstration levels increased across the region as women demanded respect for women’s rights and an end to gender-based violence on International Women’s Day on 8 March. In Mexico, some women’s rights demonstrations turned violent as demonstrators clashed with police, while unidentified armed suspects and gangs engaged in heightened levels of violence targeting women. Elsewhere, ongoing contestation between cartels, including the Jalisco New Generation Cartel (CJNG), and local criminal groups drove heightened levels of violence across multiple states. In Honduras and Jamaica, violence remained high amid gang attacks against civilians and security operations. Meanwhile, in the Dominican Republic, a prison riot left several injured.

On International Women’s Day on 8 March, women held demonstrations in Costa Rica, Guatemala, El Salvador, Haiti, Honduras, Panama, Puerto Rico, and Mexico, demanding respect for women’s rights and an end to gender-based violence. In Guatemala, women condemned congress’s approval on 8 March of a bill including heavier sentences for terminating pregnancies (France 24, 10 March 2022). The bill’s approval prompted three consecutive days of protests in Guatemala City. On 9 March, members of the LGBT+ community joined protests against the bill, which also prohibits same-sex marriage (BBC, 9 March 2022). President Alejandro Giammattei has claimed that he will not grant his final approval to enforce the law (EFE, 11 March 2022).

In Mexico, women demonstrated in 31 states, with demonstrations turning violent in 10 cities amid clashes between demonstrators and police. In Ciudad de Mexico, thousands of women called for an end to violence against women and demanded justice for victims of violence (La Silla Rota, 8 March 2022). The demonstration turned violent as some participants clashed with police and destroyed government buildings, leaving 25 people injured.

Amid the surge in women’s rights demonstrations, political violence targeting women remained high in Mexico last week. In Michoacán state, suspected members of the El Abuelo Cartel killed four women in Tepalcatepec. Experts have outlined risks for women in areas affected by high levels of gang violence in Mexico, where they are targeted in retaliatory attacks between rival groups and for their community activism (Infobae, 9 March 2022). Meanwhile, on 9 March, unidentified gunmen launched an attack against a woman mayoral candidate from the National Regeneration Movement (MORENA) during a rally in Santa Cruz Xoxocotlán, Oaxaca state. The candidate claimed that political rivals were responsible for the attack (Infobae, 10 March 2022), which left three members of her team injured. ACLED’s Subnational Surge Tracker first warned of increased violence to come in Oaxaca in the past month. Thus far in 2022, ACLED records over 90 attacks targeting women in Mexico. Social organizations accuse the state of ongoing failure to investigate such attacks and address their root causes (Amnesty International, 20 September 2021).

Meanwhile, gang violence escalated in the neighboring states of Michoacán, Jalisco, and Colima, amid ongoing conflicts between the CJNG and local criminal groups. On 10 March, the United Cartel (CU) clashed against CJNG members and members of local self-defense groups in Nuevo San Juan Parangaricutiro, Michoacán state, leaving five dead. Elsewhere, unidentified assailants shot and killed the mayor of Aguililla municipality and an adviser of the mayor during separate attacks. In 2021, the CJNG expanded its operation in several municipalities in Michoacán as part of its offensive against local criminal groups — currently allied under the CU — to take control of drug trafficking routes and extortions (BBC, 11 March 2022; Expansión Política, 22 February 2022).

In Jalisco state, clashes between rival groups were recorded in Tamazula de Gordiano municipality on 10 March. These clashes contribute to the 300% increase in violence in Jalisco state over the past week relative to the past month, as flagged by ACLED’s Subnational Surge Tracker. Additionally, in Colima, at least eight civilians were killed in gang attacks. Such violence contributes to the 238% increase in violence in Colima last month relative to the past year flagged by ACLED’s Subnational Threat Tracker. The Subnational Tracker first warned of increased violence to come in Colima in the past month. Last week’s violence in Jalisco and Colima states occurred amid local reports of CJNG members in the area and internal disputes between CJNG factions (Infobae, 11 March 2022; Milenio, 12 February 2022).

Meanwhile, in Sonora state, attacks by armed groups against civilians last week contributed to the 136% increase in violence in the state over the past week relative to the past month, as flagged by ACLED’s Subnational Surge Tracker. In eight municipalities, attacks by unidentified assailants were recorded, resulting in the death of 14 people. Police attributed most of the attacks to the La Plaza gang after messages signed by the group were found in different locations threatening locals and authorities, accusing them of supporting rival criminal groups (Infobae, 8 March 2022). The La Plaza gang — an ally of the Caborca Cartel — is seeking to control drug and weapons trafficking routes that connect Sonora to the border with the US, fighting factions of the Sinaloa Cartel and the CJNG (InSight Crime, 7 January 2022).

In Honduras, extortion-related attacks against civilians by gang members resulted in the 47% increase in violence in Honduras last week relative to the past month flagged by ACLED’s Conflict Change Map, which first warned of increased violence to come in the country in the past month. On 7 March, Barrio-18 gang (B-18) members shot at a radio station premises in Tegucigalpa, reportedly demanding payment of extortion money (La Tribuna, 9 March 2022). Similar attacks targeting taxi and bus drivers were recorded throughout the week in four departments, causing five deaths. Extortions are considered one of the main sources of revenue for gangs in Honduras, which carry out attacks against drivers, store owners, and residents who refuse to pay extortion fees (VOA, 7 March 2022).

In Jamaica, violence continued at high levels last week, driven by clashes between police and gangs. Most of the violence occurred in Saint James parish, where police and military forces killed an unidentified suspect during an anti-gang operation last week. These clashes contribute to the 100% increase in violence in Saint James last week relative to the past month flagged by ACLED’s Subnational Surge Tracker. The Subnational Tracker first warned of increased violence to come in Saint James in the past month. Police also clashed with armed men during security operations in Saint Catherine parish, resulting in four deaths, including members of the Top Burgher Gully Gang. ACLED’s Conflict Change Map first warned of increased violence to come in Jamaica in the past month. These clashes follow the government’s announcement on 11 February of a new anti-gang task force to curb insecurity in Jamaica (Jamaica Observer, 12 February 2022).

In the Dominican Republic last week, a riot inside a prison in Santiago municipality left at least seven people injured, including intervening police officers. The riot was reportedly related to disputes between inmates for control of the prison (El Nacional, 10 March 2022). While violence in Santiago has not been common, it has become increasingly volatile, resulting in a shift from ‘low risk’ to being considered an area of ‘growing risk’ by ACLED’s Volatility and Risk Predictability Index.