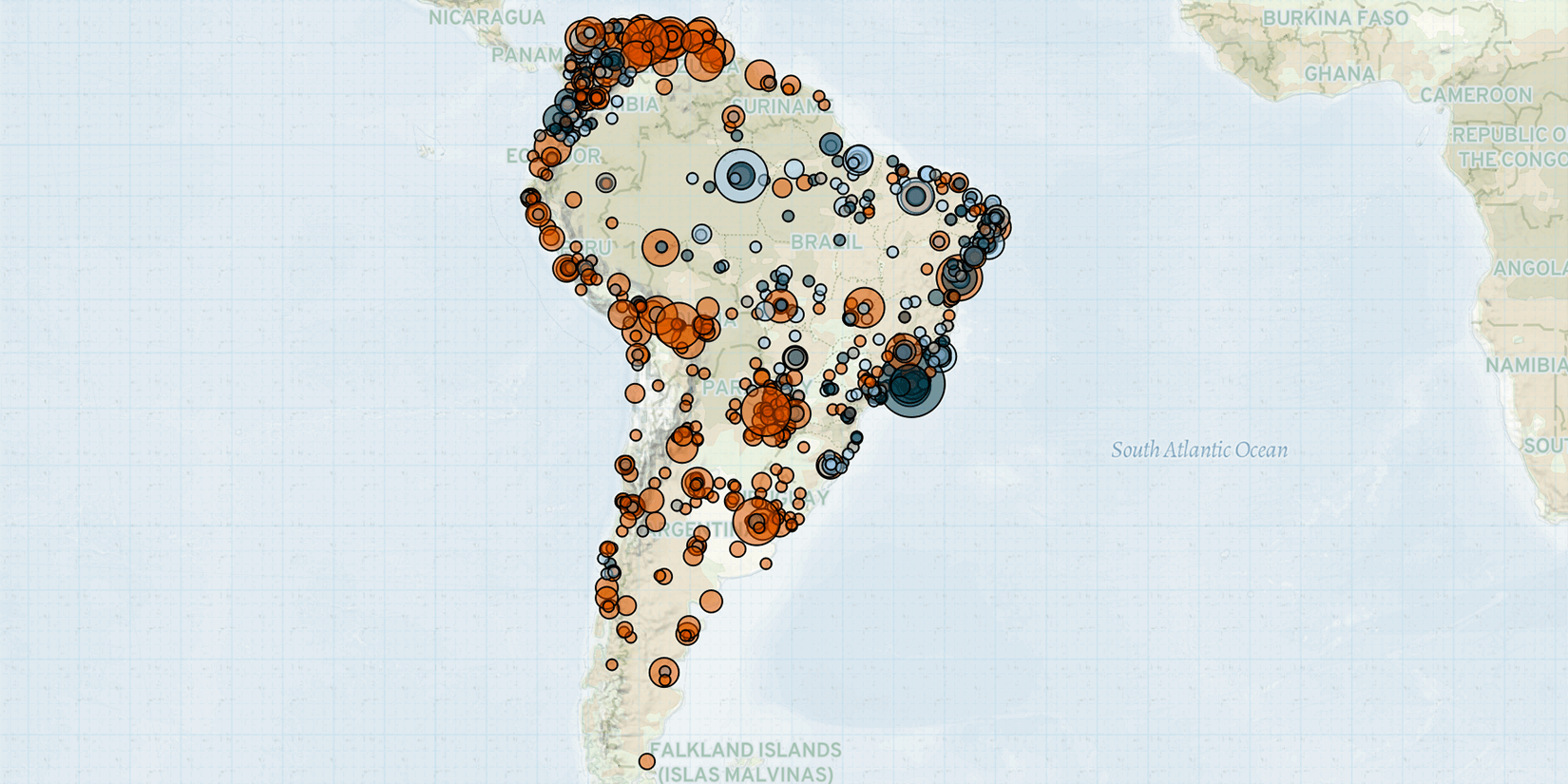 Last week in South America, demonstrations broke out in Argentina ahead of congress’s approval of a new agreement with the International Monetary Fund (IMF). In Chile, a Mapuche armed group attacked forestry and mining companies in the Araucanía and Biobío regions, while on 11 March, new President Gabriel Boric was sworn-in. In Colombia, increased violence targeting candidates ahead of legislative elections on 13 March led numerous candidates to withdraw their candidatures. In Brazil, violent clashes linked to police militias and drug trafficking groups continued last week.

In Argentina, demonstrators took to the streets on 9 and 10 March in five different provinces to repudiate a new agreement between the government and the IMF on the repayment of a USD 44 billion loan. Under the new deal, Argentina would progressively reduce its fiscal deficit from 3% in 2021 to just 0.9% in 2024 (La Nación, 10 March 2022). According to the government, the debt deal would not affect social spending or economic growth (El País, 28 January 2022). However, demonstrators claim it will increase poverty, make working-class people bear the expenses of fiscal adjustments, and that instead, the funds should be used to pull people out of poverty (La Nación, 10 March 2022). In Buenos Aires, a small group led by the Socialist Party of Unified Workers (PSTU) and the Teresa Rodríguez Movement (MTR) set a United States flag on fire, and threw petrol bombs and stones at the National Congress building. Police attempted to disperse the crowd with rubber bullets and water cannons, as clashes with demonstrators left five officers injured. ACLED’s Subnational Threat Tracker first warned of increased violence to come in Buenos Aires in the past month. Despite the demonstrators’ demands, the Lower House approved the IMF agreement on 11 March (La Nacion, 11 March 2022).

In Chile, the Weichan Auka Mapu (WAM) carried out attacks against forestry and mining companies in the Araucanía and Biobío regions last week. In Nueva Imperial, Araucanía, the armed group broke into a mining company and set fire to equipment, vehicles, and buildings. Similarly, in Arauco, Biobío, the group burned four pieces of machinery that were the property of a forestry company. In both cases, WAM perpetrators left pamphlets at the scene demanding land restitution for Mapuche Indigenous groups and the release of Mapuche prisoners. These recent trends contribute to the 250% increase in violence in Chile over the past week relative to the past month that is flagged by ACLED’s Conflict Change Map. WAM accuses the state of failing to ensure their right to the ancestral territory of the Mapuche ethnic group, which they claim is under threat of exploitation by agriculture and forestry industries (EMOL, 5 November 2021; La Tercera, 4 November 2021) (for more, see this ACLED analysis piece: Understanding Indigenous Conflict in Chile).

Meanwhile, Boric was sworn in as the new Chilean president alongside a progressive and majority-women cabinet on 11 March (The Guardian, 21 January 2022). Boric is a former student leader who actively participated in the 2019 mass demonstrations, which led to the rewriting of Chile’s Augusto Pinochet-era constitution (El Diario, 23 November 2021).

In Colombia, attacks against candidates running for the 13 March legislative elections continued last week, while candidates denounced the lack of basic security guarantees (Pares, 10 March 2022). In parts of the Caribbean region, the Gulf Clan banned any opposition to their endorsed candidate Jorge Tovar from campaigning in the northern region (WRadio, 25 February 2022). In Carepa, Antioquia department, unidentified armed individuals opened fire on the vehicle of two candidates, injuring one. This attack contributed to the 113% increase in violence in Antioquia last week relative to the past month flagged by ACLED’s Subnational Surge Tracker. The Subnational Tracker first warned of increased violence to come in Antioquia in the past month. Violence in Antioquia is both common and highly volatile; it is considered an area of ‘extreme risk’ by ACLED’s Volatility and Predictability Index.

Amid the violence, at least 17 ‘victim representatives’ — vying for 16 transitional seats in war-torn regions — dropped out of the congressional elections, claiming that authorities were manipulating the elections (Telesur, 12 March 2022). These transitional seats were created as part of an ongoing peace process that seeks to boost the representation of conflict victims in congress until 2030 (La Republica, 13 March 2022). However, increasing violence in the rural areas threatened their participation in the run. Meanwhile, in Valledupar city, César department, candidates chained themselves to the regional registrar’s office to demand the postponement of the elections due to the increasing violence.

Elsewhere, in Cauca department, the National Liberation Army (ELN) clashed with dissidents of the Carlos Patiño faction of Revolutionary Armed Forces of Colombia (FARC) in the countryside last week, resulting in the deaths of three FARC dissidents. Meanwhile, the ELN announced a temporary ceasefire between 10 and 15 March to ease election day attendance at the polls (Telesur, 4 March 2022). ACLED’s Conflict Change Map first warned of increased violence to come in Colombia in the past month.

In Brazil, the Red Command (CV) engaged in several clashes with police militia groups in Rio de Janeiro state last week, resulting in the deaths of at least six militia members. Since February 2022, at least 17 militia members have been killed in clashes throughout Rio de Janeiro state. Separately, in Paraná state, a drug trafficking group clashed with military police, resulting in the deaths of five drug traffickers. Two other fatalities were reported in the state last week, stemming from violent events involving drug trafficking groups. Located in the tri-border area along Brazil, Argentina, and Paraguay, the state of Paraná has become a hub for drug trafficking, allowing the distribution of drugs coming from Paraguay (R7, 29 October 2021). These trends contributed to the 380% increase in violence in Paraná last week relative to the past month flagged by ACLED’s Subnational Surge Tracker. The Subnational Tracker first warned of increased violence to come in Paraná in the past month.