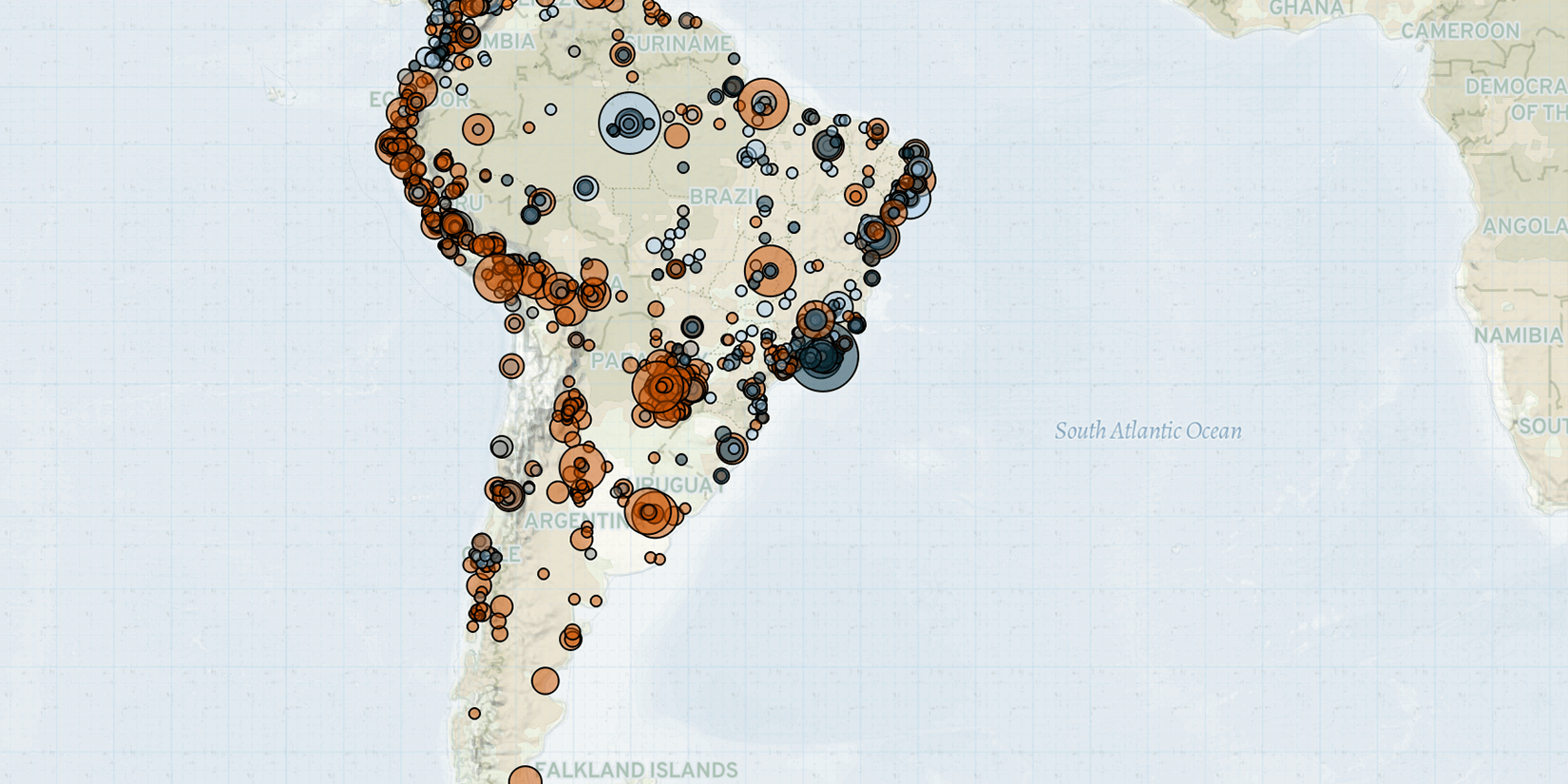 Last week in South America, attacks by Mapuche Indigenous militia groups against forestry companies increased following the end of a state of emergency in southern Chile. In Peru, demonstrations over rising costs of food, fuel, and fertilizers turned violent, with authorities declaring a state of emergency and imposing a curfew in Lima and Callao departments. In Colombia, violent attacks against demobilized members of the Revolutionary Armed Forces of Colombia (FARC) and armed clashes between the Gulf Clan and state forces continued. Finally, in Brazil, drug trafficking territorial disputes led to killings across the country.

In Chile, Indigenous militia groups attacked forestry companies in the Araucanía and Biobío regions last week. The Coordination Arauco Malleco (CAM), an organization made up of Mapuche groups in southern Chile, claimed responsibility for two arson attacks carried out against farms in Cholchol and Padre Las Casas areas. Meanwhile, at least 40 members of the Mapuche Lavkenche Resistance (RML) attacked houses near Lanalhue Lake in Arauco province. Three people were injured in the attack and private property was destroyed. The attackers demanded the withdrawal of all government criminal cases against the Mapuche or the transfer of all Mapuche prisoners to education and work centers (Biobio Chile, 2 April 2022). These attacks happened a few days after the end of the state of emergency in the Araucanía and Biobío regions on 26 March (La Tercera, 26 March 2022). Former President Sebastián Piñera had adopted the state of emergency on 12 October 2021 to allow for continued military patrols in areas with high Indigenous militia activity (BBC, 14 October 2021). ACLED’s Subnational Surge Tracker first warned of increased violence to come in Biobío in the past month. Indigenous activists who fight for Mapuche rights have claimed for decades that their territory has been illegally seized by agriculture and forestry companies acting with state complicity (Reuters, 10 July 2021) (for more, see this ACLED analysis piece: Understanding Indigenous Conflict in Chile).

In Peru, truck drivers and farmers continued to demonstrate over rising costs of food, fuel, and fertilizers, blocking several highways across the country last week. While most demonstrations remained peaceful, demonstrators burned tires, clashed with police, and attacked commercial establishments and vehicles in some localities. Following the outbreak of demonstrations, authorities declared a one-month state of emergency and imposed a curfew in the departments of Lima and Callao (La Republica, 5 April 2022). The measures prompted further demonstration activity, leading thousands of people to the streets in Lima in defiance of the curfew and demanding the resignation of President Pedro Castillo (El Regional de Piura, 5 April 2022). Demonstrators clashed with police forces and damaged the premises of the Supreme Court of Justice and the Public Ministry. Demonstrators also attacked journalists covering the event. Amid the outbreak of violence, 25 police officers and several civilians were injured and an unknown number of demonstrators were arrested. This violence contributed to the 294% increase in violence in Peru last month relative to the past year flagged by ACLED’s Conflict Change Map, which first warned of increased violence to come in the country in the past month.

Meanwhile, in Colombia, armed groups continued to target demobilized FARC combatants last week. Unidentified armed individuals killed three demobilized FARC members in the Guaviare, Antioquia, and Bogotá departments. ACLED’s Subnational Surge Tracker first warned of increased violence to come in Antioquia in the past month. Violence in Antioquia and Bogotá are both common and highly volatile; they are considered areas of ‘extreme risk’ by ACLED’s Volatility and Predictability Index. The latest attacks come as United Nations officials reiterated their concern for the safety of former FARC members, highlighting the deaths of 315 ex-combatants since the peace agreement with the government was signed in 2016 (UN News, 5 April 2022).

In Brazil, four people were killed in targeted attacks amid drug trafficking territorial disputes in the Bolivia-Peru border region of Acre state. Acre is home to significant organized crime activities driven by its location in the tri-border region between Brazil, Peru, and Bolivia (Revista Piauí, 28 April 2020). While much of the Peruvian cocaine trafficked through Bolivia enters Brazil on drug flights, its extensive shared border with Peru and Bolivia also allows the use of land and river routes (Revista Piauí, 28 April 2020). ACLED’s Subnational Surge Tracker first warned of increased violence to come in Acre in the past month.

Similarly, ongoing territorial disputes between rival drug trafficking groups led to a surge in violent events in Rio Grande do Sul state last week, including targeted attacks against civilians. These trends contribute to the 133% increase in violence in Rio Grande do Sul last week relative to the past month flagged by ACLED’s Subnational Surge Tracker. The Subnational Tracker first warned of increased violence to come in Rio Grande do Sul in the past month. While local gangs had previously implemented a truce to prevent the expansion of the First Capital Command (PCC) in the state, internal conflicts have put an end to the truce, resulting in recent outbreaks of violence (Sul 21, 6 April 2022).

Furthermore, in São Paulo state, members of the PCC killed a fellow group member in Praia Grande municipality last week. The victim was executed by the PCC’s ‘crime tribunal’ — an informal justice system created by the group — after they accused him of acting as a police informant (UOL, 11 October 2017). ACLED’s Subnational Surge Tracker first warned of increased violence to come in São Paulo in the past month.