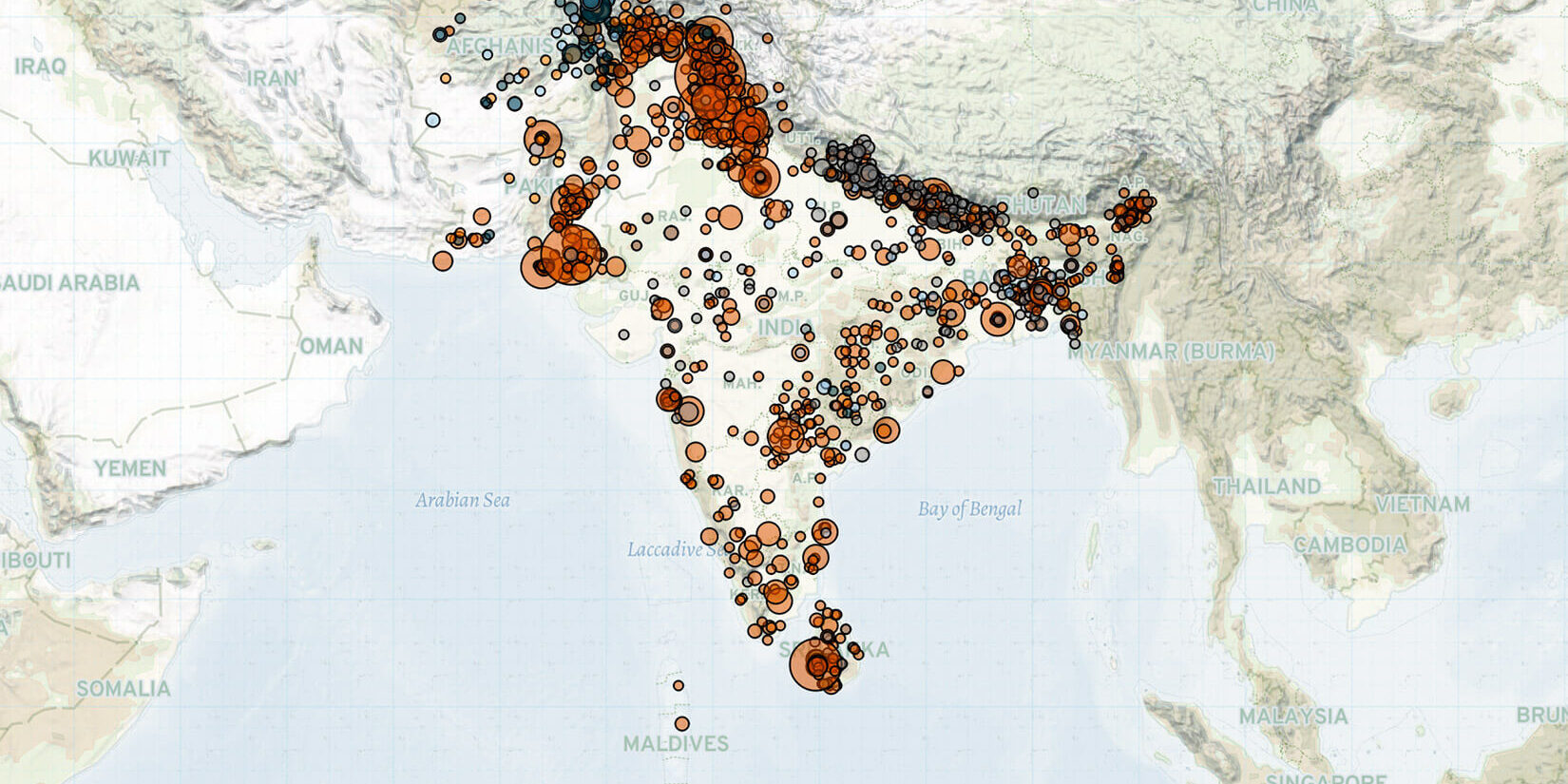 Last week in South Asia and Afghanistan, Islamic State (IS), unknown groups, and the Taliban attacked civilians in Afghanistan, while anti-Taliban groups and IS continued to attack the Taliban. In Pakistan, Pakistan Tehreek-i-Insaf (PTI) supporters held demonstrations demanding fresh elections, while Baloch separatists targeted security forces and civilians in Balochistan province. In India, security forces conducted operations against militants in Jammu and Kashmir (J&K), while Naxal-Maoist rebels continued to target state forces and development projects in the Red Corridor. In Sri Lanka, anti-government demonstrations continued as mob violence broke out amid the country’s worst economic crisis in decades. In Nepal, inter-party clashes broke out across several provinces following the announcement of the results of local elections held on 13 May. In Bangladesh, clashes involving Bangladesh Awami League (AL) and Bangladesh Nationalist Party (BNP) supporters were reported across several divisions.

In Afghanistan, IS, unidentified groups, and the Taliban targeted civilians last week. On 25 May, at least nine civilians were killed and dozens injured in Mazar-e-Sharif city in Balkh province when remote bombs detonated in three minibuses carrying people from the Hazara community. IS claimed responsibility for the attack (Al Jazeera, 25 May 2022). This attack was the third IS attack in Mazar-e-Sharif city in the past month, with the previous attacks targeting Shiite Muslims. On the same day, another explosion occurred inside a mosque in Kabul city, killing at least five people. Similar to other deadly mosque attacks in Kabul on 29 April and 13 May, the perpetrators of the attack remain unknown.

Taliban forces also carried out attacks targeting civilians across the country. Among these attacks, the Taliban opened fire at a wedding ceremony in Surkh Rud district of Nangarhar province for unclear reasons, injuring the bride and many others. The Taliban also targeted civilians for playing music in Kabul city.

Meanwhile, anti-Taliban groups carried out attacks against the Taliban across the country last week. The National Resistance Front (NRF) continued offensives in Panjshir province, as well as Parwan and Kapisa, claiming to have killed at least 40 Taliban members in Panjshir. Meanwhile, the Taliban reportedly conducted operations against two NRF bases in the province. Taliban forces also continued to detain and torture locals in Panjshir, including elders and children (Hasht-e Subh, 26 May 2022). These trends contribute to the 256% increase in violence in the province last month relative to the past year, as flagged by ACLED’s Subnational Threat Tracker. The Subnational Tracker first warned of this increased violence to come in Panjshir in the past month. Elsewhere, in Ghazni province, the Afghanistan Liberation Movement claimed to have killed the Taliban’s chief of intelligence in a mine explosion (Shafaqna, 27 May 2022). In Kabul province, the National Liberation Front of Afghanistan claimed to have conducted an attack on the Taliban police chief’s house in Qarabagh district, reportedly killing seven Taliban members (Subhe Kabul, 25 May 2022).

IS also carried out multiple attacks against the Taliban in Kabul city, including a suicide bombing that killed at least two Taliban members during a commemoration ceremony for former Taliban leader Akhtar Mansour (TOLO News, 22 May 2022; Twitter @Natsecjeff, 22 May 2022). IS also targeted a Taliban vehicle with an explosive device, killing or injuring all those on board.

Supporters of the PTI, led by former Prime Minister Imran Khan, held demonstrations across Pakistan last week, demanding fresh elections. Outbreaks of violence were reported during demonstrations in several provinces, including Punjab, Sindh, and the Federal Capital Territory. These trends contribute to the 357% increase in violence in Punjab and 211% increase in violence in Sindh last week relative to the past month, as flagged by ACLED’s Subnational Surge Tracker. The Subnational Tracker first warned of increased violence to come in these provinces in the past month. Amid the ongoing demonstrations, the Pakistan government launched a crackdown on Khan’s supporters, arresting more than 1,700 supporters (Al Jazeera, 26 May 2022). PTI supporters have been staging anti-government demonstrations since parliament removed the PTI-led government on 9 April through a successful vote of no-confidence in then Prime Minister Khan (Al Jazeera, 9 April 2022).

Meanwhile, Baloch separatists continued to target security forces and civilians in Balochistan province last week. Two soldiers and a civilian were killed in separate attacks involving the Baloch Nationalist Army (BNA) and the Baloch Liberation Front (BLF) in Kech and Mastung districts. Violence in Balochistan is both common and highly volatile; it is considered an area of ‘extreme risk’ by ACLED’s Volatility and Risk Predictability Index.

Elsewhere in India, Naxal-Maoist rebels continued targeting state forces and development projects in the Red Corridor last week. Naxal-Maoist rebels injured a member of the Chhattisgarh Armed Force (CAF) in an IED attack in Chhattisgarh state. They also set ablaze more than 350 bags of tendu leaves (used as wrappers for tobacco) and multiple roadwork vehicles in Madhya Pradesh and Odisha. Elsewhere, Naxal-Maoist rebels killed a tribal villager in Gadchiroli district, Maharashtra, for opposing the rebels and trying to promote the construction of a road to the village. Naxal-Maoist activity contributed to the 135% increases in violence in both Madhya Pradesh and Maharashtra last month relative to the past year, as flagged by ACLED’s Subnational Threat Tracker.

In Sri Lanka, anti-government demonstrations over the country’s ongoing economic crisis continued in several provinces last week. Sporadic incidents of mob violence were also reported over fuel shortages, contributing to the 593% increase in violence in the country last month relative to the past year, as flagged by ACLED’s Conflict Change Map. Sri Lanka has been facing one of its worst economic crises in recent decades, with a deteriorating currency, regular power cuts, and acute shortages in fuel, pharmaceuticals, and cooking gas (Newsfirst, 14 March 2022).

In Nepal, incidents of mob violence were reported across several provinces last week, including Bagmati, Province 1, and Madhesh, following the announcement of the results of local elections held on 13 May. Multiple injuries were reported across separate incidents of mob violence involving Nepali Congress (NC), Communist Party of Nepal (Unified Marxist-Leninist), Democratic Socialist Party (LSP), and Communist Party of Nepal (Unified Socialist) supporters. These clashes contributed to the 596% increase in violence in Nepal last month relative to the past year, as flagged by ACLED’s Conflict Change Map, which first warned of increased violence to come in the country in the past month. Rivalries within and between political party factions vying for influence can often lead to violence in Nepal (for more, see this recent ACLED report).

In Bangladesh, multiple clashes involving AL and BNP supporters and their student wings – Bangladesh Chhatra League (BCL) and Bangladesh Jatiotabadi Chatra Dal (JCD) – were reported across several divisions last week. The clashes broke out amid demonstrations by BNP and JCD members against AL chief and Prime Minister Sheikh Hasina for hurling derogatory remarks at BNP chairperson Khaleda Zia. In Dhaka, at least 31 people were injured in a clash between BCL and JCD members. The clashes contribute to the 28% increase in violence in Bangladesh over the past week relative to the past month that is flagged by ACLED’s Conflict Change Map.

Indrajit Sharma is the South Asia Assistant Research Manager at ACLED. He holds an MA in Criminology and a PhD in Security Studies. His research interests include conflict management and resolution, armed conflicts and insurgency, migration/refugees, and national security. He has previously worked as Researcher for India, Bangladesh and Sri Lanka at ACLED.