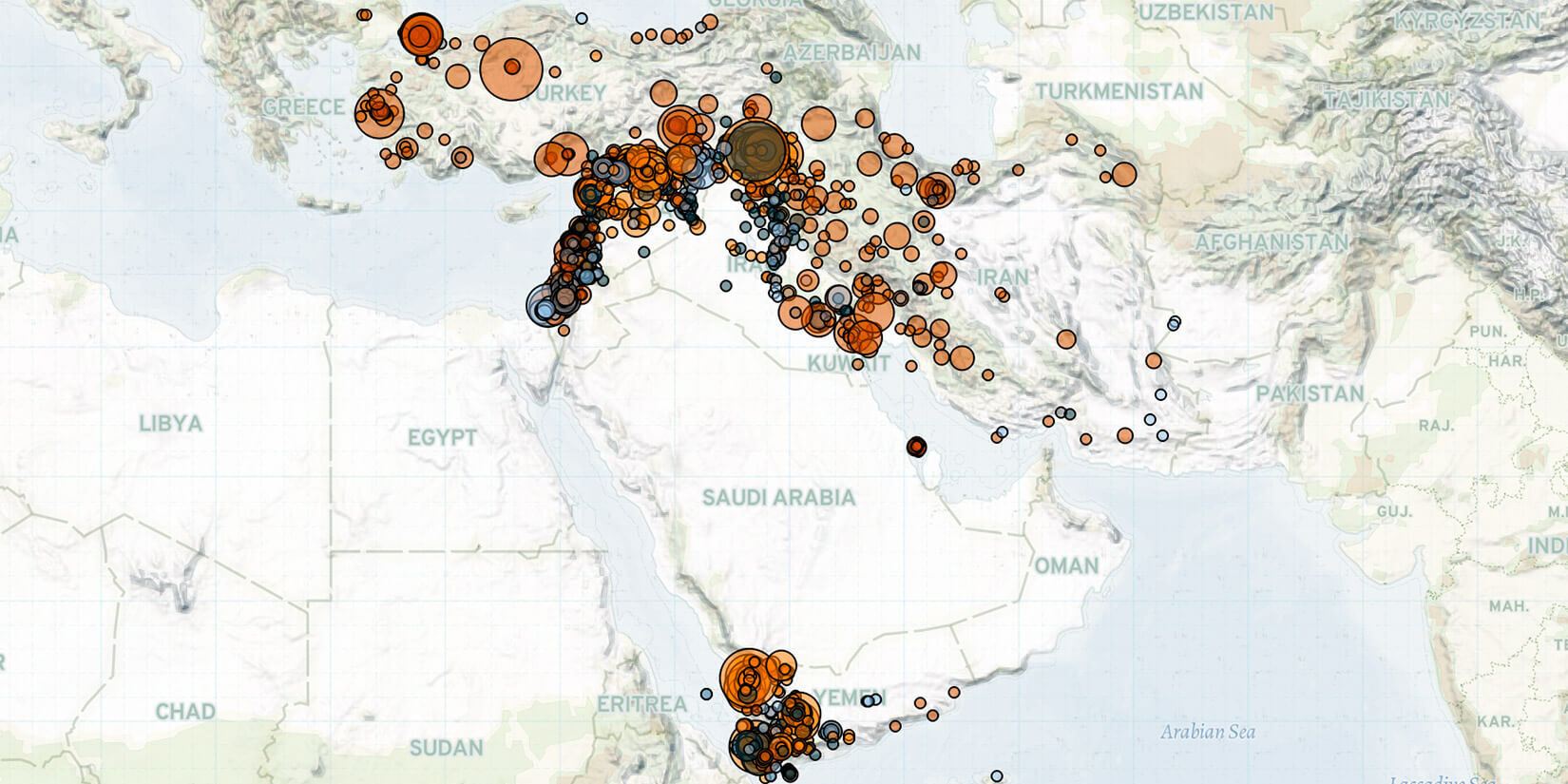 Last week in the Middle East, political violence decreased in Yemen during the scheduled final days of the UN-mediated truce before its extension for another two months. In Syria, Turkey announced its intent to launch a new cross-border operation against the Syrian Democratic Forces (QSD). In Iraq, poor public services triggered riots in Thi Qar province. In Iran, protests caused by the Metropol building collapse continued for the second week. In Palestine, clashes erupted between Israeli demonstrators and Palestinian counter-demonstrators in East Jerusalem, while four Palestinians were killed in clashes with Israeli forces in the West Bank. In Turkey, state forces continued to clash with Kurdistan Workers Party (PKK) militants, while a soldier was killed by a PKK-planted IED. In Lebanon, health workers in different parts of the country protested against violence targeting them, while two people were killed in clan-related clashes.

In Yemen, political violence decreased last week as the country reached the end of the initial two months of the UN-mediated truce on 2 June (for more on truce violations, see ACLED’s Yemen Truce Monitor). Despite this, violence levels remained high in Hodeidah and Taizz governorates, concentrated in the frontlines around Hays and Maqbanah districts. Armed clashes also took place in Jabal Habashy district and in the north of Taizz city. Violence levels decreased in Ad Dali, Marib, and Sadah governorates.

No Saudi-led coalition air raids from fighter jets were reported for the ninth consecutive week last week, and no Houthi drone or missile attacks on Saudi Arabia for the tenth consecutive week. Houthi forces, however, reported the death of two people from coalition drone strikes in Ad Dali governorate (Ansar Allah, 1 June 2022), and Houthi drone strikes injured a National Resistance fighter in Hodeidah.

Elsewhere, unidentified groups killed five Shabwani Defense fighters in two attacks with explosive devices in Shabwah governorate. Also in Shabwah, the 5th Giants Brigade assumed control of the Jannah Hunt sector oil fields from the 107th Infantry Brigade of the Internationally-Recognized Government (IRG) (South24, 30 May 2022).1With the Political Leadership Council (PLC) taking part in the renewal of the UN-mediated truce, it is confirmed that PLC is now in power in Yemen instead of President Abdrabbuh Mansour Hadi. ACLED will now be referring to the ‘Internationally-Recognized Government’ where it used to refer to the ‘Hadi government’ (for more on the creation of the PLC, see the political developments around the truce in ACLED’s Yemen Truce Monitor). This development could be linked to the establishment last week of a committee to restructure all security and military forces within the territory held by the various factions of the Political Leadership Council (Twitter @Alsakaniali, 30 May 2022).

Turkey announced a plan last week to launch a new operation in Syria targeting QSD-controlled Tall Refaat and Menbij in Aleppo (Al Jazeera, 1 June 2022), triggering a build-up of local and international forces in northern Syria. The Global Coalition and US forces significantly increased the number of vehicle patrols along the contact line between Turkish-backed forces and QSD in Al Hasakeh province (SOHR, 2 June 2022). Russia similarly conducted increased air patrols near the border and deployed reinforcements to its bases in Ar Raqqa and Al Hasakeh provinces (SOHR, 29 May 2022), while the Syrian army and pro-Iranian militias sent reinforcement to Tall Refaat (Kurdistan 24, 30 May 2022). Turkish and Turkish-backed forces also increased the shelling of QSD-controlled areas in northern Syria, especially in Ar Raqqa province. ACLED’s Conflict Change Map first warned of increased violence to come in Syria in the past month.

In Iraq, fighting between Turkish forces and the PKK slightly declined for the third consecutive week last week. However, the PKK’s Free Women’s Units (PKK-YJA STAR) increased their activity last week, more than doubling their engagement with Turkish forces compared to the week prior. Despite the general decrease in fighting, Turkey’s Operation Claw Lock in northern Iraq continues to be a significant driver of violence in Iraq. Operation Claw Lock-related events have contributed to the 71% increase in violence in Iraq in the past month relative to the past year flagged by ACLED’s Conflict Change Map, which first warned of increased violence to come in the country in the past month.

Meanwhile, poor public services — especially the unreliable supply of electricity —  triggered demonstration activity in Syria and Iraq. In Syria, rioters set fire to the offices of an electricity company in Afrin and Mare’ cities, while peaceful protests were held elsewhere in Aleppo province. In Iraq, poor public services and a lack of job opportunities triggered riots in Nassriya city and elsewhere in Thi Qar province. In Islah city, rioters set fire to the local electricity department building, demanding the dismissal of the department’s head. These riots contributed to the 100% increase in violence in Thi Qar last week relative to the past month, as flagged by ACLED’s Subnational Surge Tracker. The Subnational Tracker first warned of increased violence to come in Thi Qar in the past month.

In Turkey, Turkish forces clashed with PKK militants on three separate occasions in Sirnak and Siirt provinces. These trends contribute to the 100% increase in violence in Sirnak over the past week relative to the past month, as flagged by ACLED’s Subnational Surge Tracker. Meanwhile, a Turkish soldier was killed after stepping on a PKK-planted IED near Dogankoy village in Siirt province.

In Iran, protests triggered by the collapse of the Metropol building in Abadan city in Khuzestan continued for a second consecutive week and Iranian police dispersed the demonstrations with tear gas and arrests (VOA, 5 June 2022). Elsewhere, unknown gunmen assassinated a senior leader in the Islamic Revolutionary Guard Corps – Quds Force and fired at police during a veterans rally in front of the Martyrs Foundation in Tehran city.

Last week in East Jerusalem, Israeli and settler demonstrators clashed with Palestinian counter-demonstrators in the Old City area. On 29 May, around 70,000 Israeli demonstrators marched through the Old City in celebration of Jerusalem Day, an Israeli holiday commemorating the country’s victory in the 1967 Arab-Israeli war and the annexation of East Jerusalem (Times of Israel, 29 May 2022). The Israeli government also allowed around 2,600 Jews, including prominent right-wing extremists, to visit the Al Aqsa/Temple Mount complex in the Old City for the holiday, further stoking tensions (Times of Israel, 29 May 2022). Multiple clashes occurred throughout the day, erupting after some Israeli demonstrators began chanting anti-Arab slogans. At least 23 Palestinians were injured during the clashes and required hospitalization (AP News, 29 May 2022).

In the West Bank, four Palestinians were killed last week in clashes with Israeli forces. Israeli forces shot and killed a Palestinian woman after she attempted to carry out a stabbing attack near Al Arrub refugee camp. Meanwhile, Israeli forces killed two Palestinian rioters during clashes after they raided Yabad town and Ad Duhayshah refugee camp. Lastly, Israeli soldiers opened fire and killed a Palestinian after he hurled a Molotov cocktail at them at the security fence in Al Midyah village. Clashes in East Jerusalem and the West Bank contributed to the 81% increase in violence in Palestine last week relative to the past month flagged by ACLED’s Conflict Change Map, which first warned of increased violence to come in the country in the past month.

In Lebanon, health workers held nationwide protests last week in solidarity with a nurse who was assaulted while on duty and to demand better government protection for health workers. Demonstrations were held in front of at least seven governmental hospitals.Meanwhile, multiple clan-related armed clashes were reported in Lebanon last week. A Lebanese soldier was killed during clashes with an unidentified clan militia in Baalbek, while another person was killed in clan clashes in the Mazraa area of Beirut. This violence contributed to the 42% increase in violence in Lebanon in the past month relative to the past year flagged by ACLED’s Conflict Change Map, which first warned of increased violence to come in the country in the past month.