From 2 April to 2 October, a truce mediated by the United Nations between the Houthis and the internationally recognized government took effect in Yemen. It included a halt to all offensive military operations inside and outside of the country, the entry of fuel ships into Hodeidah ports, the opening of Sanaa airport to certain commercial flights, and discussions on improving road access to Taizz and other governorates (Office of the Special Envoy of the Secretary-General for Yemen, 6 April 2022).

To help track the impact of the agreement,1 UN Special Envoy for Yemen Hans Grundberg stated explicitly that the UN will not monitor the cessation of hostilities (Office of the Special Envoy of the Secretary-General for Yemen, 6 April 2022). ACLED had created the Yemen Truce Monitor, an interactive tool displaying the latest data on reported violations. The tool was updated every Tuesday with data from the previous week. With the end of the truce,2The truce was announced for an initial two-month period from 2 April to 2 June. It was then renewed for two two-month extensions until 2 October when it expired as the parties failed to reach an agreement for a third renewal. updates to the Yemen Truce Monitor have stopped. ACLED will resume updates if current diplomatic efforts to renew the truce succeed.

ACLED’s Yemen data are collected in partnership with the Yemen Data Project, which is tracking air raids during the truce. Subscribe for their weekly updates.

More on political and military developments around the April 2022 truce

Alongside the truce, conflict parties engaged in a number of peace initiatives throughout March and into April 2022. In early March, UN Special Envoy for Yemen Hans Grundberg started several weeks of consultations with Yemeni stakeholders to inform the development of his Framework for Yemen – a multitrack process towards attaining a sustainable political settlement (Office of the Special Envoy of the Secretary-General for Yemen, 7 March 2022). Later in the month, the Gulf Cooperation Council hosted Yemeni-Yemeni consultations in Riyadh, Saudi Arabia, in a parallel initiative that was welcomed by Grundberg (Office of the Special Envoy of the Secretary-General for Yemen, 30 March 2022). This represented the first time since the 2016 Kuwait peace talks that such a wide range of Yemeni actors met face-to-face to discuss a political solution to the conflict. The Houthis refused to take part in the Riyadh consultations, however, citing that they were not held in a “neutral” country (Yemen News Agency, 16 March 2022).

On the ground, the Riyadh consultations were preceded by successive announcements of unilateral cessations of military operations. After conducting one of their largest waves of drone and missile attacks on Saudi Arabia, the Houthis announced the cessation of military operations for three days starting on 27 March (Ansar Allah, 26 March 2022; Ansar Allah, 27 March 2022). The Saudi-led coalition followed suit after it carried out retaliatory airstrikes on the Houthi-held cities of Hodeidah and Sanaa. The coalition announced that it would cease military operations for an undetermined period of time starting on 30 March to foster a positive environment for the Yemeni-Yemeni consultations in Riyadh and the holy month of Ramadan (Saudi Press Agency, 29 March 2022).

The final days of these consultations saw one of the most significant political developments in Yemen since the start of the conflict. On 7 April, Yemeni President Abdrabbuh Mansour Hadi dismissed Vice President Ali Mohsen Al Ahmar and delegated both of their executive powers to a newly established presidential council. The council, which was quickly dismissed by the Houthis as a Saudi internal affair irrelevant to Yemen (Twitter @Moh_Alhouthi, 7 April 2022), is headed by former Interior Minister Rashad Al Alimi and includes seven other members. It brings together leaders from various anti-Houthi factions with significant sway on the ground (Sana’a Center, 3 May).

The Yemen Truce Monitor was designed to provide near real-time data for use by media, analysts, policymakers, and the public to track key conflict developments during the truce, which began on 2 April 2022 and ended on 2 October 2022.3ACLED data reflect the best available information at the time of release, and event details are continuously monitored and updated accordingly as new or better information becomes available.

The Yemen Truce Monitor tool allows users to analyze data on violations of the agreement to “halt … all offensive ground, aerial, and maritime military operations, inside and outside of Yemen” over time. The tool identifies truce violations as direct armed interactions between opposing combatants,4These include actors affiliated with the Houthi government on one side, and the internationally recognized government, the Southern Transitional Council (STC), and the Saudi-led coalition, on the other side. as well as acts of remote violence — that may or may not hit a military target — including shelling, airstrikes, and drone strikes.5The monitor does not include the Remote explosive/landmine/IED sub-event type as a truce violation. In the vast majority of cases, events from this sub-event type will be caused by devices planted before the truce.

The Yemen Truce Monitor tool does not capture which actor initiated truce violation events in two-sided incidents. It also does not track events that are the result of infighting between different actors from the same side of the conflict. Moreover, it does not include potential violations of a “freeze in current military positions on the ground,” such as the digging of trenches or the building of fortifications.6For more on ACLED methodology, see our Codebook.

In addition to truce violations, the tool also includes a secondary dashboard that tracks the wider state of the conflict in Yemen and displays information on overall levels of organized political violence and violence targeting civilians since the start of ACLED coverage in January 2015. Users can find further analysis of the latest conflict trends in our weekly Regional Overviews.

Analysis of conflict and protest trends since the announcement of the truce at the start of April 2022. 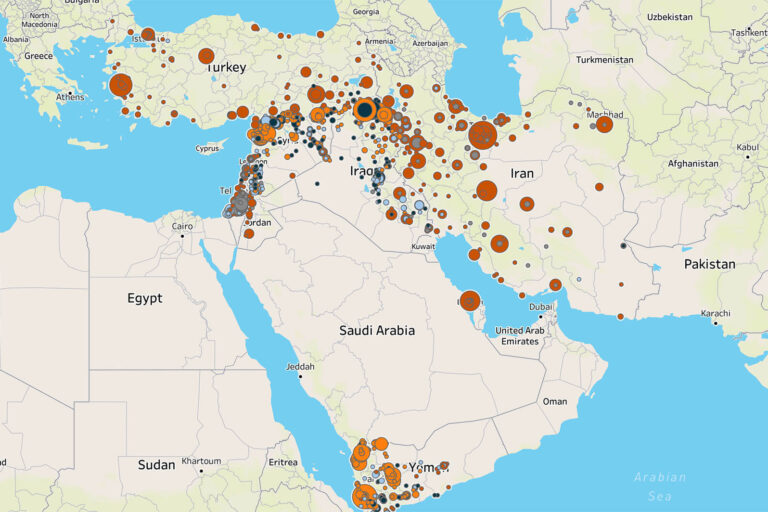 Last week in the Middle East, Houthi forces conducted a new drone strike on a port harboring an oil tanker…

Last week in the Middle East, political violence reached its highest levels in Yemen since the end of the UN-mediated…

Last week in the Middle East, levels of political violence declined significantly in Yemen, despite increased Houthi drone activity across…

Last week in the Middle East, Yemen continued to witness low levels of political violence for the second consecutive week,… 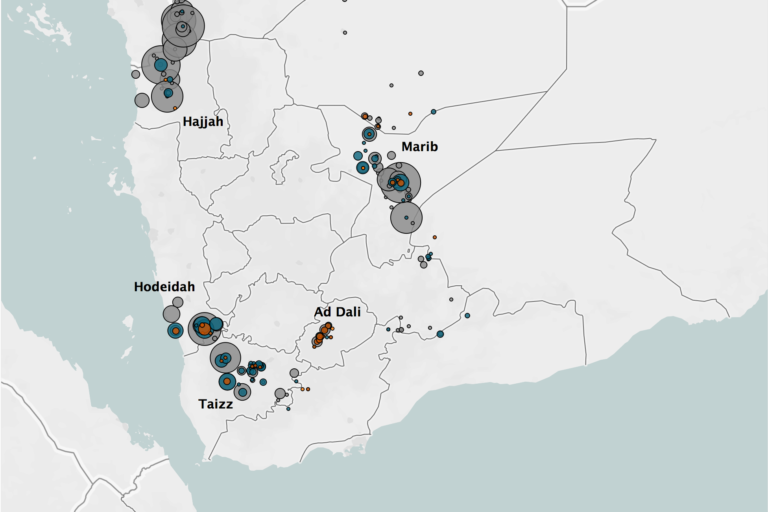 Violence in Yemen During the UN-Mediated Truce: April-October 2022

A review of key conflict trends during the truce period. 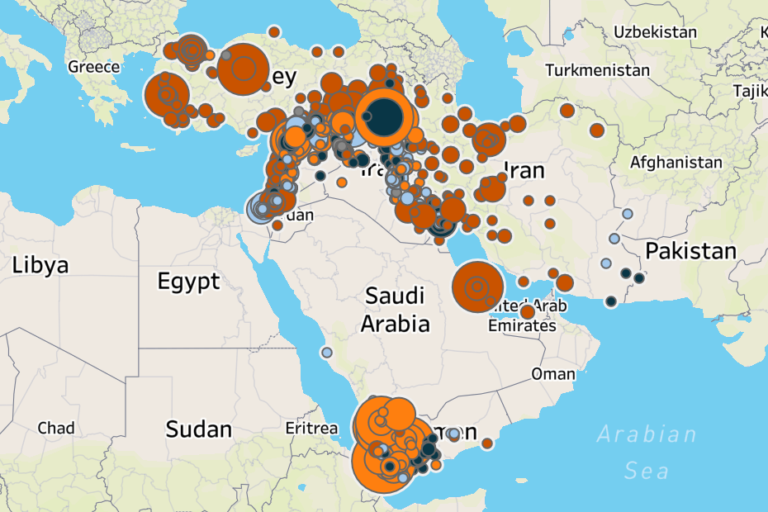 Last week in the Middle East, political violence decreased in Yemen during the last week of the UN-mediated truce’s second…

Last week in the Middle East, political violence remained stable at high levels in Yemen, as the end of the…

Last week in the Middle East, political violence reached some of its highest levels in Yemen since the start of…