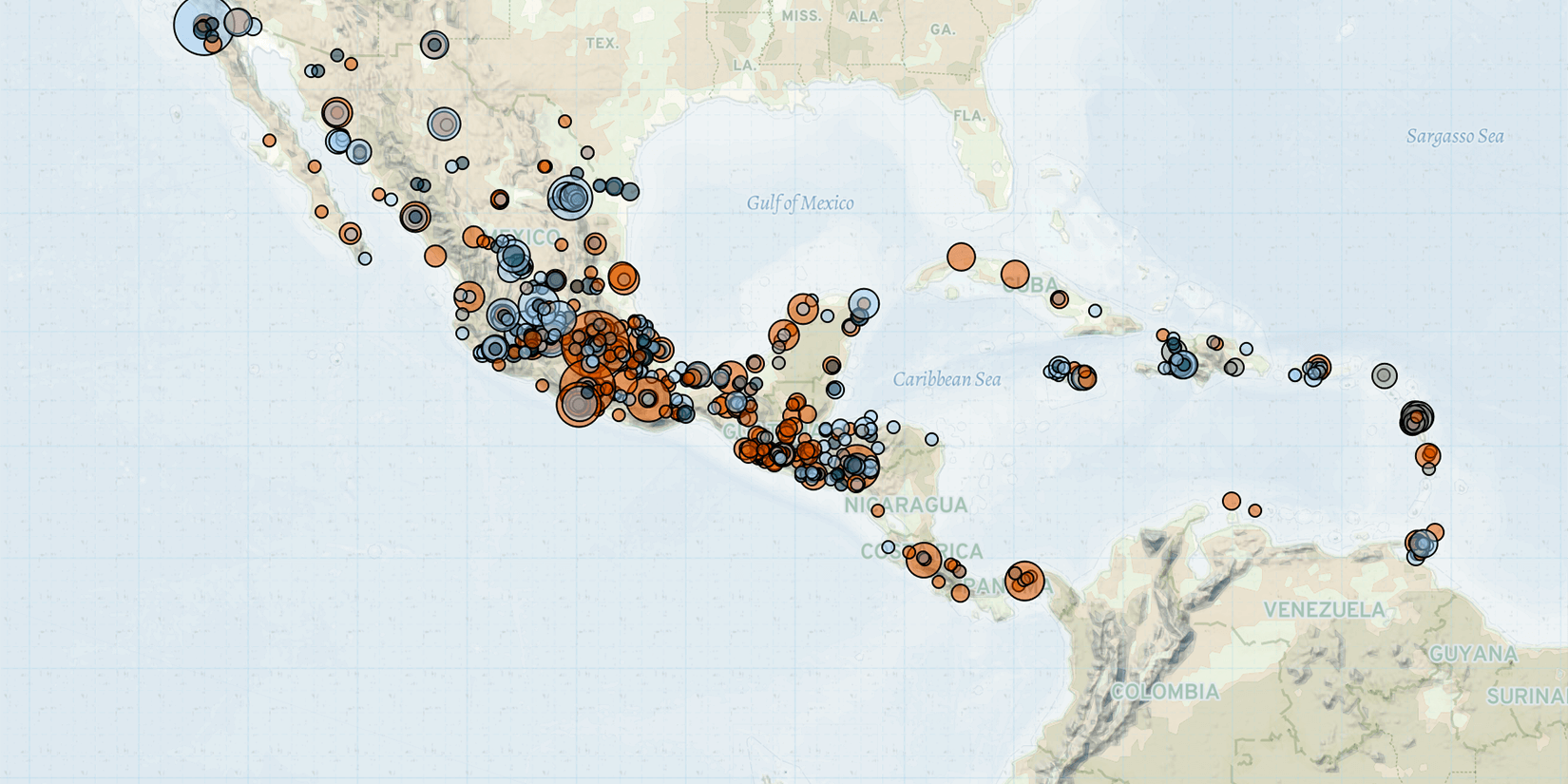 Last week in Mexico, Central America, and the Caribbean, demonstrations increased while violence slightly decreased, with the exception of trends in Honduras and in some states of Mexico. In Honduras, internal divisions within the Liberty and Refoundation Party (LIBRE) over the election of the president of congress triggered demonstrations ahead of the inauguration of President Xiomara Castro on 27 January. Meanwhile, gang violence remained high in Honduras, as clashes between rival gangs left seven people dead. In Mexico, the killing of a woman journalist and an attack against an Indigenous journalist by armed assailants triggered demonstrations across the country. In Puebla and Hidalgo states, violence increased last week. In Cuba, police arrested Ladies in White activists ahead of a protest demanding the release of political prisoners. In Guatemala, taxi drivers blocked several roads to demonstrate against the payments of liabilities insurance. In Guadeloupe, riots against COVID-19-related measures continued.

In Honduras, members and supporters of LIBRE and the allied Savior Party of Honduras (PSH) demonstrated in Tegucigalpa last week, after internal LIBRE divisions led to the election of two different leaders of congress. Demonstrators protested outside congress for three consecutive days, beginning on 22 January, rejecting the election of a new congressional president, Jorge Calix, by a breakaway group of LIBRE deputies supported by members of the opposition (La Prensa, 23 January 2022). Calix’s election was rejected by President Castro, who had promised the congressional presidency to Luis Redondo from PSH (BBC, 24 January 2022). Both congressional presidents claim to be the legitimate authority of congress, demanding the Constitutional Chamber of the Supreme Court to rule on the case (DW, 29 January 2022). Meanwhile, demonstrations turned violent in Zambrano where LIBRE supporters set barricades of burning tires, and another group in Cortes department shot at the house of a LIBRE deputy who did not support Castro’s proposed congressional leader (HCH, 27 January 2022). Amid the congressional dispute, Castro was sworn in as president on 27 January, taking her oath before a judge instead of the president of the congress as has been done traditionally by previous governments (DW, 27 January 2022).

Meanwhile, clashes between members of the B-18 gang and a rival gang in Tegucigalpa left at least seven people dead on 28 January. The B-18 gang and the Mara Salvatrucha (MS-13) are the main groups that dispute the control of extortions and drugs sales in the urban areas of the country (HRW, 13 January 2022). In January, ACLED records an increase in armed clashes in Honduras compared to the month prior. The majority of these events have been clashes between rival gangs. ACLED’s Conflict Change Map first warned of increased violence to come in Honduras last month.

In Mexico, violence against journalists continued last week, with attacks in Baja California and Oaxaca states. Armed suspects shot and killed a journalist outside her home in Tijuana on 23 January. The victim had previously covered reports related to corruption schemes in Baja California and had started a legal process for labor demands against a former state governor (Infobae, 29 January 2022). Following previous attacks and threats against her life, she had been granted protection measures by the state’s Mechanism for the Protection of Journalist and Human Rights Defenders in 2021 (Article 19, 25 January 2022). In Juchitan de Zaragoza, Oaxaca, unidentified gunmen attacked an Indigenous journalist on 26 January. The journalist survived the attack, with his security exchanging fire with the gunmen. These attacks come only a few days after two other killings and several other attacks against journalists recorded in January. The increased violence against journalists in January triggered nationwide protests last week, as journalists demand greater security and investigations into the recent attacks. According to experts, the state’s protection mechanism has failed to guarantee security to journalists as it lacks the capacity and the resources to face the high level of demand for security schemes (CNN, 27 January 2022).

Elsewhere, in Puebla state, a newly-elected auxiliary councilor was killed after local communal elections in the village of Xonapa on 23 January. The reason behind his killing remains unknown. Meanwhile, voters demonstrated in two other villages within Puebla municipality, burning ballots and closing polling stations, rejecting the electoral results. This violence contributes to the 133% increase in violence in Puebla last week relative to the past month that is flagged by ACLED’s Subnational Surge Tracker.

In Hidalgo state, groups of ‘huachicoleros’ — or fuel thieves — attacked employees of the state oil company Mexican Petroleum (PEMEX) during operations to close oil pipes that had been vandalized by the groups. The huachicoleros are often groups of residents of areas nearby oil pipes that have become involved in the sale and trafficking of gasoline; they often have links with criminal groups (EMEEQUIS, 5 November 2021). For two consecutive days, huachicoleros attacked PEMEX employees, throwing stones and other objects at their vehicles in Ulapa de Melchor de Ocampo village. Such violence resulted in a 180% increase in violence in the state last week relative to the past month that is flagged by ACLED’s Subnational Surge Tracker; ​​which first warned of increased violence to come in Hidalgo state last month. According to PEMEX, damage to oil pipes resulting from the setup of illegal gasoline taps increased in 2021 compared to 2020, with significant damage being reported in Hidalgo (El Pais, 15 September 2021).

In Cuba, members of the Ladies in White organization staged protests in la Habana and Camaguey on 23 January, demanding the release of political prisoners and demonstrators who participated in the 11 and 12 July 2021 anti-government demonstrations. Ahead of the demonstrations, plain clothes police arrested the leader of Ladies in White along with five other members as they travelled to participate in a protest (Cubanet, 24 January 2022). These arrests follow an announcement by the Ladies in White that they would resume their Sunday protests to demand the release of political prisoners (Swissinfo, 30 January 2022). The Ladies in White was created in 2003 to advocate for the freedom of political prisoners after a wave of arrests of members of the political opposition (Radio Televisión Martí, 19 September 2019). Prior to the outbreak of the COVID-19 pandemic, the Ladies in White held protests each Sunday that were often repressed by state officers (Radio Televisión Martí, 21 January 2022). Violence targeting women activists in Cuba, such as the Ladies in White, has increased in Cuba in recent years, making it one of the most violent places in the world for women in politics (see this recent report by ACLED on 10 countries to watch in 2022 when it comes to violence targeting women in politics – which includes Cuba).

In Guatemala, drivers of public transport services blocked roads across the country between 24 and 25 January to demand the repeal of regulation that obliges them to pay the liability to third parties in traffic accidents. Drivers argue that this regulation will increase the charges that they have to pay to be able to work, while drivers of cargo trucks that are responsible for accidents do not have to pay this fee (La Prensa, 25 January 2022). Last week, ACLED recorded demonstrations in 15 of Guatemala’s 22 departments over this topic. In the departments of Retalhuleu, Suchitepequez, Peten, and Huehuetenango, rioters threw stones and objects at police as they tried to dissolve the demonstrations. While the regulation was approved by the former government in 2020, it has not yet been implemented due to the rejection of drivers’ unions (Swissinfo, 25 January 2022).

In Guadeloupe, demonstrators continued to barricade roads last week to demonstrate against mandatory COVID-19 vaccinations for health workers and the use of health passes to access public places. These events contributed to a 25% increase in violence in Guadeloupe last week relative to the past month that is flagged by ACLED’s Conflict Change Map; the tool first warned of increased violence to come in the country last month. Police reported attacks by rioters during their interventions to lift barricades in the district of Bas-Terre and Point-a-Pitre. Recently, local authorities claim that these riots have been influenced by criminal groups that seek to maintain disorder on the island, while labor groups leading the demonstrations blame authorities for criminalizing the movement (L’Obs, 26 January 2022).