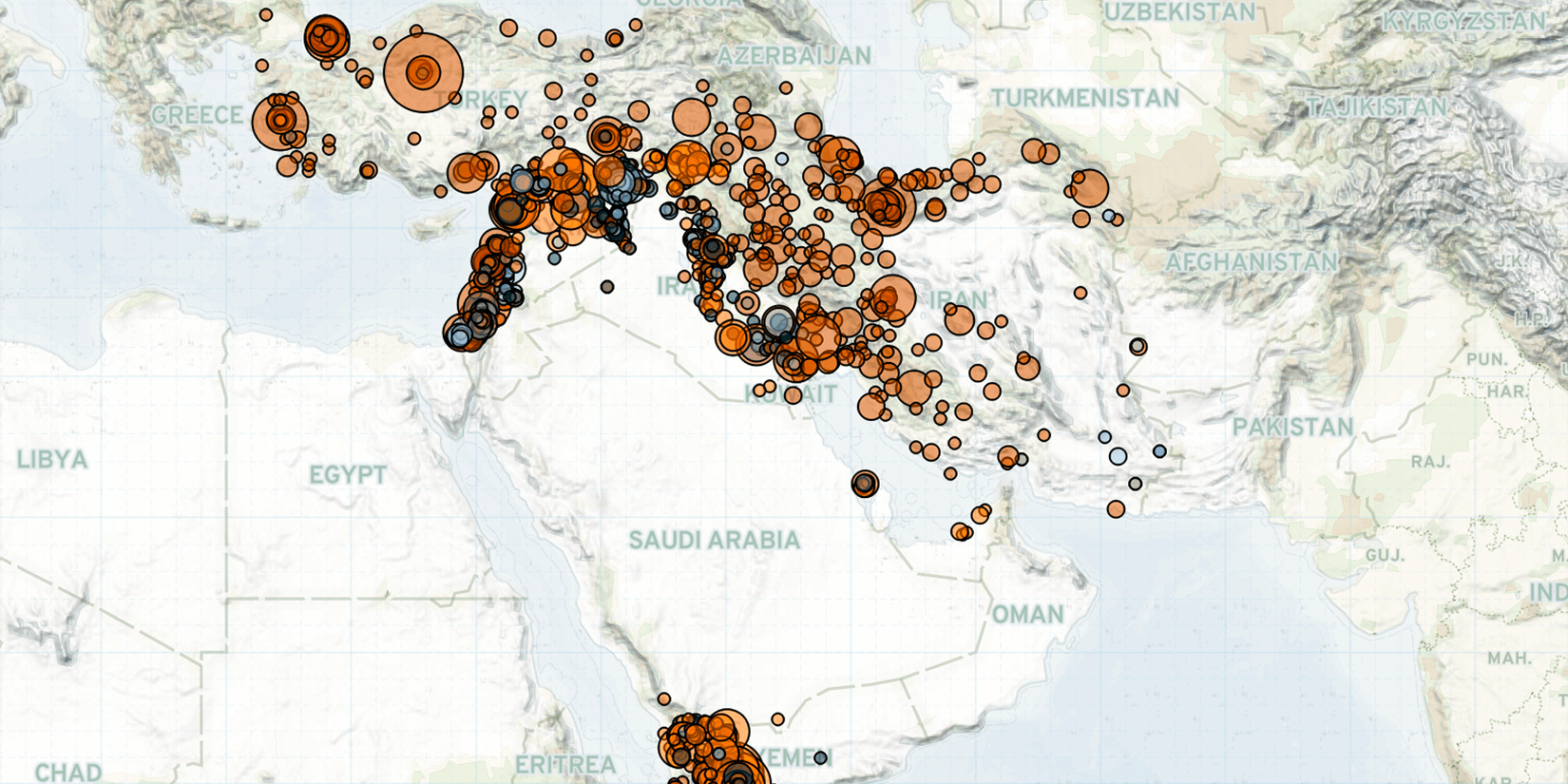 In the UAE, UAE forces intercepted both a Houthi air attack on Abu Dhabi — the third attack in as many weeks — and a drone attack from the lesser-known Iraqi Al Waad Al Haq Brigades last week. The Al Waad Al Haq Brigades stated that it had targeted the UAE over its actions in Iraq and Yemen (Associated Press, 3 February 2022). The repeated targeting of the UAE in recent weeks has prompted the US defense secretary to announce the deployment of a warship and fighter jets to the UAE (US Department of Defense, 1 February 2022). The UAE also activated its defense agreement with France, with French forces to help protect the UAE airspace (Reuters, 4 February 2021).

On the ground, clashes between Houthi and anti-Houthi forces with Saudi-led coalition air support took place in Hajjah, Taizz, and Marib governorates last week. Pro-Hadi advances towards Harad city in Hajjah governorate and in Jabal Habashy district in Taizz governorate contributed to increases in violence last week of 173% and 112% in Hajjah and Taizz, respectively, relative to the past month. These spikes have been flagged by ACLED’s Subnational Surge Tracker, which first warned of increased violence to come in Taizz last month. Pro-Hadi forces also gained territory against Houthi forces in the northwest of Marib governorate last week, while clashes between Houthi and Giants Brigades forces continued in the south of the governorate. These various offensives against Houthi forces contribute to the 29% increase in violence in Yemen over the past month relative to the past year that is flagged by ACLED’s Conflict Change Map, which first warned of increased violence to come last month.

In Syria, on 3 February, Global Coalition forces clashed with IS militants in an airdrop operation targeting IS leader Abdullah Qardash near Atmah town in the Idleb countryside. During the operation, Qardash detonated an explosive belt, which led to his death. The clashes resulted in 13 fatalities, including the IS leader, four children, and three women. Elsewhere, overall levels of violence decreased in Al Hasakeh province last week following the significant spike in violence the week prior due to a high-profile IS prison break attempt in Al Hasekeh city. Nonetheless, violence remained high in Al Hasakeh city as Syrian Democratic Forces (QSD) continued to clash with IS remnants and arrested suspected IS affiliates in the city. ACLED’s Conflict Change Map warned of increased violence to come in Syria last month.

Meanwhile, in Turkey, the Kurdistan Workers’ Party (PKK)-affiliated Peoples’ United Revolutionary Movement conducted remote explosive attacks damaging electricity transformers last week, while its forces also fired on Turkish police vehicles. At the same time, one Turkish soldier was killed in shelling carried out from inside Syria – likely by Kurdish forces – against a Turkish army border post. These events contribute to the 85% increase in violence in Turkey over the past week relative to the past month that is flagged by ACLED’s Conflict Change Map, which warned of increased violence to come in Turkey last month.

These attacks coincided with Turkey’s launch of Operation Winter-Eagle targeting the People’s Protection Units (YPG) in Al Hasakeh province in Syria and the PKK in the Sinjar, Makhmur, and Qarachoq mountain regions in northern Iraq (Shafaaq News, 2 February 2022). Turkish and Turkish-backed opposition artillery and airstrikes resumed in northeastern Al Hasakeh province, following a temporary pause since 21 January. Artillery strikes targeted positions in the Al Malikeyyeh, Ras Al Ain, and Tal Tamer sub-districts. As a result of the same operation, Turkish airstrike events doubled in northern Iraq last week. The increase was exclusively driven by Turkish airstrikes targeting PKK militants in Ninewa province. Due to last week’s escalation, Ninewa is now considered an area of ‘extreme risk’ by ACLED’s Volatility and Risk Predictability Index as violence is now increasingly volatile in the province. In response to heightened Turkish activity, thousands of locals held anti-Turkey demonstrations in the Sinjar district of Ninewa province and Makhmur district in Erbil province. The Turkish operation comes in conjunction with the increase in Turkish activity against the PKK in the northern border region of Iraq during Operations Claw-Lightning and Claw-Thunderbolt last year (for more on this conflict, see this recent ACLED infographic: Turkey-PKK Conflict: Rising Violence In Northern Iraq.

Elsewhere in Iraq, violence increased in several other provinces across the country. In Salah Al Din  province, the trend of increasing clashes between Iraqi forces and IS militants continued. IS militants clashed with the Iraqi army and Popular Mobilization Forces in Hamreen district, while the Iraqi air force conducted air strikes against IS militants in the Al Daur and Samarra districts. Combat activity overall in Salah Al Din province remained higher last week when compared to last month. Meanwhile, tribal clashes increased in Maysan province last week, prompting Iraqi security forces to impose a curfew in Qalat Salih district. ACLED’s Subnational Surge Tracker first warned of increased violence to come in both Salah Al Din as well as Maysan last month. While violence in Maysan has not been common, it has recently become increasingly volatile, denoting an area of ‘growing risk’ by ACLED’s Volatility and Risk Predictability Index.

In Lebanon, labor and transportation unions led nationwide demonstrations last week against the government’s neglect of their demands amid worsening living conditions and economic crisis. Demonstrators called for the provision of fuel subsidies and a vehicle tax exemption for public workers and drivers. The demonstrations unfolded as Lebanon’s taxi, bus, and truck drivers started a three-day strike calling on the government to address the economic crisis (AP News, 2 February 2022).

Meanwhile, active and retired teachers in Iran continued their nationwide protests in over a hundred locations across the country last week, calling for the implementation of a salary ranking plan that would increase their wages. A one-day strike was held in conjunction with the protests (Al Arabiya News, 1 February 2022). Protesters also call for the release of jailed teachers who were detained during previous protests (Iran Wire, 1 February 2022). Police forces arrested and dispersed protesters in three locations last week.

Lastly, in Palestine, unidentified armed groups opened fire at Israeli military forces in the West Bank in several incidents last week. Two drive-by shootings took place near Nablus city and Yitzhar settlement, where a military site and vehicle were targeted. Additionally, an armed group opened fire at Israeli soldiers as they raided Tubas city and clashed with Palestinian residents. A Palestinian was wounded by a rubber bullet, though no casualties amongst Israeli soldiers were reported.