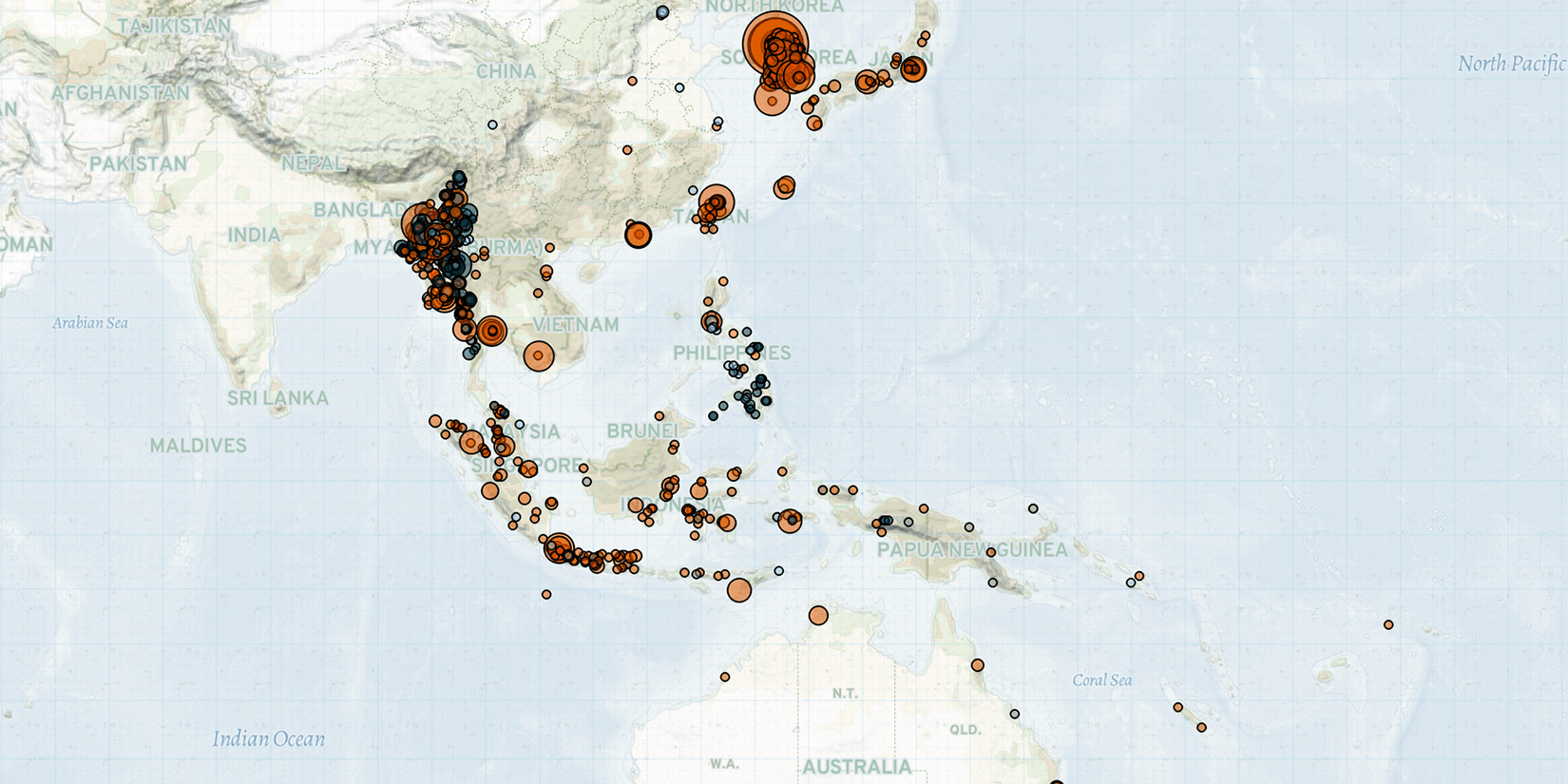 Last week in the East Asia Pacific region, clashes erupted in southern Shan state between the Myanmar military and a coalition of multiple defense groups and the Karenni National Progressive Party/Karenni Army (KNPP/KA). Meanwhile, the military commemorated the 75th anniversary of the ‘Union of Burma’ on 12 February and invited ethnic armed organizations (EAOs) to a series of peace talks, which were shunned by larger EAOs. In the Philippines, inter-clan violence turned deadly in Maguindanao, Bangsamoro region. In Indonesia, unresolved land disputes drove an increase in related violence. In Thailand, a bomb attack by suspected Malay Muslim separatists took place in Yala province for the third consecutive week. Meanwhile, convoy protests inspired by the ‘Freedom Convoy’ demonstrations in Canada continued in Australia and New Zealand. Lastly, local residents in New Caledonia held a demonstration calling for more public safety measures amid increased crime and violence.

In Myanmar, heavy fighting broke out between military forces and a coalition of multiple defense groups and the KNPP/KA on 15 February in Moe Bye town, southern Shan state. Clashes began after a reported 300 soldiers entered the area with two tanks (Myanmar Now, 18 February 2022). The military used artillery and deployed fighter jets to bomb the town, with clashes escalating over the next four days. Dozens of military and coalition fatalities were reported during the fighting, while seven civilians were reportedly wounded by heavy weapons fired by the military (Irrawaddy, 18 February 2022). The escalating clashes last week contributed to the 135% increase in violence in Shan-South over the past week relative to the past month, as flagged by ACLED’s Subnational Surge Tracker. Violence in the state is both common and highly volatile; it is considered an area of ‘extreme risk’ by ACLED’s Volatility and Predictability Index.

Meanwhile, on 12 February, the junta organized a parade in the capital to mark Union Day. Union Day commemorates the signing of the 1947 Panglong Agreement between the then-interim Burmese government and some ethnic minority leaders on the formation of the ‘Union of Burma’ (CNA, 12 February 2022). Alongside the commemorative event, the junta leader invited all EAOs, including signatories and non-signatories of the 2015 Nationwide Ceasefire Agreement, to a set of accompanying peace talks (Myanmar Now, 8 February 2022). The event was attended by only a handful of leaders from smaller EAOs, however, while leaders of larger EAOs – many of which have engaged in active conflict with the military since the coup – shunned the event and peace talks (Irrawaddy, 14 February 2022). On the same day, protesters held anti-coup protests to call for the establishment of a federal state in line with the principles of the Panglong Agreement.

Last week in the Philippines, nine people were killed in an act of inter-clan violence arising from a traditional clan blood feud — locally known as rido — in Maguindanao province. The men were killed in an ambush by a rival clan group as they traveled to a rido settlement meeting. Moro Islamic Liberation Front (MILF) fighters were present in both clan groups (Manila Bulletin, 12 February 2022). Rido violence is common in the southern Philippines, particularly in the Bangsamoro region, where it manifests as attacks or ‘vendetta killings’ by one clan on another (The Diplomat, 6 July 2017). Rido persists as intergenerational conflict that often intersects with other conflicts, such as longstanding land disputes, the Moro separatist insurgency, Islamist fundamentalist movements, and electoral competition (The Diplomat, 6 July 2017; Crisis Group, 18 February 2022). ACLED’s Conflict Change Map first warned of increased violence to come in the Philippines in the past month.

Multiple unresolved land disputes led to an increase in violence in Indonesia last week. In Maluku province, two people were killed when a dispute between Aboru and Hulaliu villagers in Haruku Island district, Central Maluku regency, prompted two days of violence. Meanwhile, in Central Sulawesi, police shot dead a student protester during an anti-mining demonstration in Parigi Moutong regency. On 12 February, 200 people, including students, held a protest and attempted to block the Trans Sulawesi Road, demanding that the government revoke mining permits in their village over an ongoing land dispute at the local mining site (Kompas, 16 February 2022). The shooting prompted several protests across the country, including in Gorontalo and Palu, with demonstrators demanding further investigation into the student’s death. Disputes triggered by unresolved land grievances continue to produce periodic clashes in both Maluku and Central Sulawesi provinces. The violence contributed to the 47% increase in violence in Indonesia last week relative to the past month flagged by ACLED’s Conflict Change Map, which first warned of increased violence to come in the country in the past month.

In Thailand, suspected Malay Muslim separatists staged a bomb attack last week for the third consecutive week. On 18 February, suspected separatists targeted a police patrol vehicle with explosives in Raman, Yala province, injuring two police officers and damaging the police vehicle. This is the seventh bomb explosion in 2022 that has been attributed to Malay Muslim separatists in Thailand, all of which have occurred in the southern provinces of Narathiwat, Pattani, Songkhla, and Yala.

In Australia, ‘Convoy to Canberra’ demonstrations against COVID-19 vaccine mandates — inspired by the ‘Freedom Convoy’ in Canada — continued last week, with demonstrator numbers reaching an estimated 10,000 people on 12 February (Canberra Times, 12 February 2022). Police began evicting protesters from their camp at the Exhibition Park in Canberra (EPIC) on 12 February. While many demonstrators left the area, several hundred relocated to new parks and reserves in the vicinity of Canberra to continue the demonstration (Canberra Times, 15 February 2022). Similarly, ‘Convoy 2022 NZ’ demonstrations continued last week in New Zealand, demonstrating against COVID-19 vaccine and mask mandates. Authorities turned on sprinklers and loud music at a makeshift campground on parliament lawn in Wellington in an attempt to disperse hundreds of protesters (Stuff, 13 February 2022). The demonstrations, which first began with demonstrators gathering and setting up tents outside of parliament on 6 February, have since entered their third week of encampment in Wellington (New York Times, 23 February 2022).

Laura Sorica is a Research Manager at ACLED's East Asia Pacific desk, overseeing political violence and protests in East Asia (Japan, Taiwan, and Mongolia) and Southeast Asia (Philippines, Indonesia, Malaysia, Brunei, Singapore, and East Timor). Her previous experiences include working in the private sector, the Romanian Embassy in Tokyo, and as an academic researcher in Japan working on security policies. She is fluent in Romanian, English, and Japanese.
Anders Lee

Anders Lee is the East Asia Pacific Assistant Research Manager at ACLED. He holds an MSc in Development Studies and has experience conducting research on development issues in Myanmar. His research interests include international migration and post-conflict state building.
Myung-Gyun Lim

Myung-Gyun Lim is a Research Manager of the East Asia Pacific desk at ACLED. Previously, he managed the ACLED's Oceania and Canada expansion project, and worked at the North America and East Asia desks as Assistant Research Manager and Researcher respectively. His research interest centers on the effects of threat inflation on inter-state conflicts.
23 February 2022
Share
TweetShare on Twitter Share on FacebookShare on Facebook Share on LinkedInShare on LinkedIn