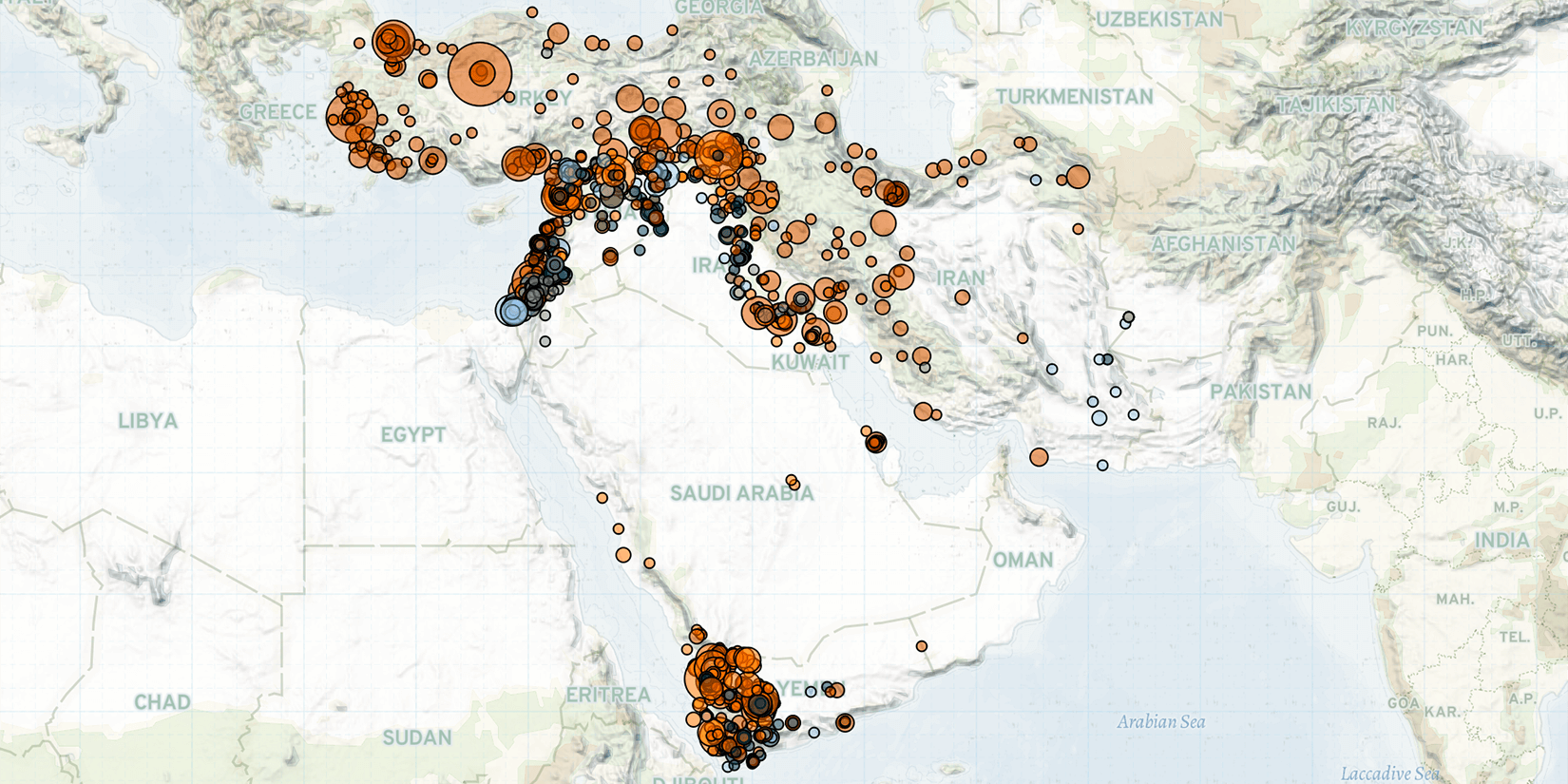 Last week in the Middle East, political violence saw a sharp increase in Yemen amid the announcement of several peace initiatives, as the country entered its eighth year since the Saudi-led military intervention began in March 2015. In Syria, political violence levels increased as opposition groups and the Syrian Democratic Forces (QSD) escalated ongoing abduction campaigns while Turkish and regime forces exchanged artillery fire. In Iraq, security forces and the Popular Mobilization Forces (PMF) conducted a counter-Islamic State (IS) operation on the eve of the Muslim month of Ramadan, beginning on 2 April. In Israel, a number of Israelis were killed in two attacks by Arab gunmen, one of which was claimed by IS. In Palestine, Israeli forces killed two Palestinians during a raid in the West Bank, and a Palestinian attacker was killed after stabbing a settler.

In Yemen, political violence levels rebounded last week after unusually low levels of political violence the week prior, resulting in a 44% increase in violence relative to the past month, flagged by ACLED’s Conflict Change Map. This comes despite the announcement of a unilateral three-day cessation of military operations by the Houthis on 26 March (Ansar Allah, 26 March 2022; Ansar Allah, 27 March 2022). Following the Houthi announcement, pro-Houthi media detailed extensive shelling by pro-Hadi forces throughout last week; pro-Hadi shelling on Houthi forces represents nearly half of all events recorded last week.1The sharp increase in shelling events last week in Yemen comes amid a Houthi reporting shift since the announcement of their unilateral ceasefire. Houthi media has since been publishing daily reports detailing pro-Hadi shelling throughout the country (Yemen News Agency, 28 March 2022). These reports might come with a potential for exaggeration and overreporting, as the Houthis attempt to put the onus of peace on the Hadi government (for more on ACLED sourcing in Yemen, see the ACLED Methodology and Coding Decisions around the Yemen Civil War).

The Houthi announcement was followed by a similar statement from the Saudi-led coalition on 29 March, which announced the cessation of its military operations amid the launch of Yemeni-Yemeni consultations in Riyadh and the start of Ramadan (Saudi Press Agency, 29 March 2022). This announcement comes after a wave of retaliatory airstrikes on Houthi-held Sanaa and Hodeidah early last week, conducted in response to the Houthi drone and missile attacks that targeted Saudi Arabia the week prior. These strikes are the first strikes on Hodeidah city since January, amid a similar wave of retaliatory airstrikes. In Sanaa, Houthi media claim that one of the strikes killed eight civilians (Al Masirah, 26 March 2022).

Yemeni-Yemeni consultations with warring parties also started in Riyadh last week, under the auspices of the Gulf Cooperation Council to support UN-led peace efforts (Reuters, 29 March 2022; Reuters, 31 March 2022). By the end of the week, UN Special Envoy for Yemen Hans Grundberg announced a two-month truce, which started at 1900 hours on 2 April to coincide with the start of Ramadan. The truce includes a nationwide ceasefire, the entry of 18 fuel vessels in the Hodeidah port, the opening of Sanaa airport to commercial flights, and discussions on improving road access to Taizz, and on the wider prospects of ending the war (Office of the Special Envoy of the Secretary-General for Yemen, 1 April 2022).

In Syria, abductions by QSD increased almost threefold in Ar Raqqa and Al Hasakeh provinces, driven by acts of forced conscription. Meanwhile, Turkish National Intelligence (MIT) and rebel groups continued to carry out abductions of civilians, particularly in Afrin and Al Bab districts in Aleppo province. Abductions in recent weeks in the province have targeted individuals accused of collaborating with QSD, as well as civilians celebrating the Kurdish New Year — Newrouz — on 20 March.

Elsewhere, Russian airstrikes on IS positions in the Syrian desert increased last week, following a lull throughout most of March, with five airstrike events recorded last week compared to one event the week prior. Russian forces also resumed airstrikes in Idlib province, with at least one thermobaric strike targeting Maaret Al Naasan town.

In Iraq, the PMF and Iraqi security forces conducted counter-IS operations along the Iraqi-Syrian border in Anbar, Salah Al Din, and Ninewa provinces last week, destroying 19 hideouts and six tunnels, and securing various assortments of weapons and explosives. These operations come ahead of concerns of increased IS activity during Ramadan (ISW, 26 May 2021). ACLED reported 88 events initiated by IS during Ramadan in 2021, while only 19 events had been reported during the month prior.

Meanwhile, Turkish airstrike events in Iraq halved last week compared to the week prior, driven by a reduction of airstrike events across Duhok province.2Note that one airstrike event can include several airstrikes and that the number of airstrikes can greatly vary from one event to another. As ACLED is an event-based dataset, ACLED records airstrike events rather than airstrikes. This ensures consistency in the data, especially given the overall rare reporting on exact airstrike counts. Despite this reduction, violence in Duhok continues to be both common and highly volatile; it is considered an area of ‘extreme risk’ by ACLED’s Volatility and Predictability Index.

In Israel, armed Israeli Arabs affiliated with IS launched a deadly attack in Hadera last week, while a Palestinian militant killed four civilians in another attack in Bnei Brak. In Hadera, two Israeli Arabs opened fire at pedestrians, injuring 10, before clashing with Israeli border police who responded to the attack. Two border police and the two attackers were killed in the fire exchange. IS has claimed responsibility for the attack. This is only the second attack on civilians claimed by IS in Israel since ACLED coverage began in 2018, taking place less than a week after another IS attack in Beersheba. The last such attack occurred in 2017, when an Israeli policewoman was killed by a Palestinian militant affiliated with IS in Jerusalem (BBC News, 28 March 2022). Meanwhile, in Bnei Brak city, a Palestinian gumman opened fire on civilians, killing four. Police forces responded to the attack and exchanged fire with the gunman, during which the gunman and a police officer were killed. The Palestinian was from the West Bank, and had previously been jailed by Israel for “security-related offences” (BBC News, 31 March 2022). ACLED’s Conflict Change Map first warned of increased violence to come in Israel in the past month. These attacks coincide with the beginning of the summit in the Negev desert between Israel, the US, the UAE, Egypt, Morocco, and Bahrain to discuss security issues (BBC News, 28 March 2022). The stated goal of the summit is to establish a “new regional architecture that will deter Iran,” and follows the normalization of ties between the aforementioned countries with Israel in 2020 (France24, 1 April 2022).

Last week in Palestine, Israeli forces killed two Palestinians during clashes in the West Bank, and a Palestinian was shot and killed by a settler after carrying out a stabbing attack. Israeli forces raided the Jenin refugee camp during an arrest operation targeting suspects related to the attack in Bnei Brak, and clashed with Palestinian gunmen and camp residents (Haaretz, 31 March 2022). Two Palestinians were shot and killed during the clashes and several were injured. In a separate incident, a Palestinian carried out a stabbing attack and injured an Israeli settler near Neve Daniel settlement in the West Bank. He was shot and killed by another settler responding to the attack.