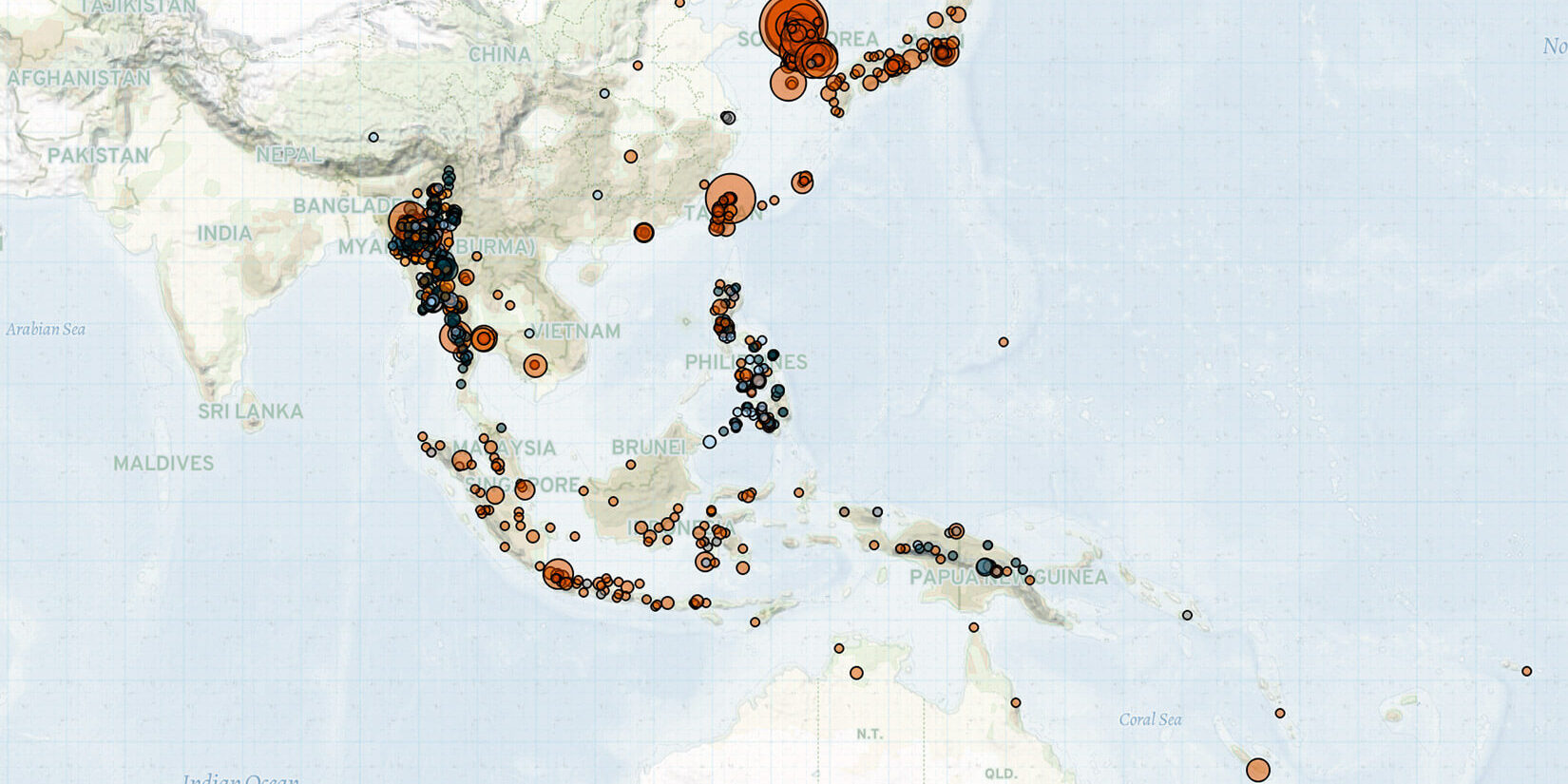 Last week in the East Asia Pacific region, fighting between the military and ethnic armed organizations (EAOs) and local resistance groups continued in Myanmar. North Korea conducted its 17th missile test in 2022. In the Philippines, there was an increase in violence related to ongoing Islamist and communist rebel insurgencies. In Thailand, military forces clashed with Malay Muslim Separatists in the Deep South after a lull in violence during Ramadan. In Indonesia, a protest against a same-sex couple was recorded in West Java amid parliamentary discussion on a bill potentially outlawing homosexuality. In South Korea, disability advocates protested throughout last week to demand improvements to mobility and disability rights. New Zealand extended the deployment of military personnel in the Solomon Islands to support the country’s security. In China, student demonstrations increased in universities opposing COVID-19 restrictions.

In Myanmar, fighting between the military and EAOs and local resistance groups continued across multiple parts of the country last week, including Mon, Shan, Kachin, and Chin states. In Mon state, a combined force of the Karen National Union/Karen National Liberation Army (KNU/KNLA), the People’s Defense Force (PDF), and the Kyaikhto Revolution Force (KRF) simultaneously attacked the central police station and the Light Infantry Battalion (LIB) 207 base in Thein Za Yat town, Kyaikto township. The combined force fired artillery shells and killed a military sergeant in the fighting (Myanmar Now, 26 May 2022). ACLED’s Subnational Surge Tracker first warned of increased violence to come in Mon in the past month.

In southern Shan state, the military fired artillery and conducted clearance operations targeting EAOs and local resistance groups in the hills near eastern Pekon Lake and the surrounding villages last week. In response, a combined force of the Karenni Nationalities Defense Force (KNDF), Karenni National Progressive Party/Karenni Army (KNPP/KA), Pekon PDF, and Southern Shan Revolution Youth (SSRY) attacked and occupied the Hsee Mi Lawt village military base in southern Pekon Lake on 24 May. Military offensives began in the area after a combined force of the KNDF, KNPP/KA, Pekon PDF, Inle PDF, and SSRY overran a military outpost in Nyaungshwe township on 12 May. Violence in Shan-South is both common and highly volatile; it is considered an area of ‘extreme risk’ by ACLED’s Volatility and Risk Predictability Index.

In Kachin state, the Kachin Independence Organization/Kachin Independence Army (KIO/KIA) launched multiple mine attacks against a military convoy last week. Attacks were reported near Hway Hkar and Hseng Taung villages of Hpakant Township and near Tanja village of Puta-O township between 22 and 27 May, causing military casualties (Kachinland News, 23 May 2022). The attacks came as the military increased movements in areas controlled by the KIA’s 6th Battalion, 9th Brigade, transporting reinforcements, weapons, and ammunition over the last week (Kachinland News, 23 May 2022).

Elsewhere, in southern Chin state, the military clashed with the United League of Arakan/Arakan Army (ULA/AA) in Paletwa township on 26 May. Following the clash, the military council issued a curfew, restricting locals from traveling between 6pm and 6am (Radio Free Asia, 27 May 2022).

North Korea conducted its 17th test missile launch in 2022 last week. On 25 May, a suspected intercontinental ballistic missile (ICBM) and two shorter-range missiles were test-fired from waters in Sunan, Pyongyang, towards the ocean off the country’s east coast (AP, 25 May 2022). The test came hours after US President Joe Biden completed a trip to South Korea and Japan, where he agreed to new measures to deter North Korea (Channel News Asia, 25 May 2022).

Last week in the Philippines, the military carried out a major ground assault with air and artillery support against the Dawlah Islamiyah-Toraife Group in Datu Salibo town, Bangsamoro Autonomous Region in Muslim Mindanao (BARMM). Two militants were killed, while 17 militants – including the group’s leader, Abu Toraife – were reportedly wounded. Following the clash, the rebels detonated two IEDs in Soccsksargen. No casualties were reported. A number of militant Islamist groups in the southern Philippines have pledged allegiance to the Islamic State (IS). Dawlah Islamiyah is believed to be an umbrella group for many of these IS-inspired groups (International Crisis Group, 27 June 2019). These trends contribute to the 300% increase in violence in BARMM last month relative to the past year flagged by ACLED’s Subnational Threat Tracker. The Subnational Tracker first warned of increased violence to come in BARMM in the past month.

Elsewhere, several clashes between the government and the communist New People’s Army (NPA) also occurred last week, including in the Cordillera Administrative Region, Davao region, and Eastern Visayas. Violence associated with the NPA and Islamist militant insurgencies contributed to the 53% increase in violence in the Philippines last month relative to the past year flagged by ACLED’s Conflict Change Map, which first warned of increased violence to come in the country in the past month.

In Thailand, military forces clashed with Malay Muslim separatists in Narathiwat last week. On 25 May, Malay Muslim separatists opened fire and threw bombs at an army base near the Thailand-Malaysia border, injuring three soldiers. The attack comes after a lull in violence in recent weeks, coinciding with a temporary truce between the Thai government and Barisan Revolusi Nasional Melayu (BRN) during Ramadan, from 3 April to 14 May.

In Indonesia, a group of villagers protested in front of a same-sex couple’s home in Cugenang district, Cianjur regency, West Java, on 22 May, demanding the couple leave the neighborhood. This event comes as the Indonesian parliament discusses a bill that would outlaw homosexuality (Benar News, 24 May 2022). Meanwhile, on 23 May, the Indonesian government summoned a British diplomat after the UK embassy in Jakarta displayed a rainbow flag in support of the LGBT+ community. Such incidents have been criticized by human rights activists as potentially increasing the likelihood of violence and discrimination against minorities (Benar News, 24 May 2022).

In South Korea, disability advocates took to the streets last week, calling for policies to improve the basic rights of people with disabilities. On 26 May, hundreds of protesters affiliated with the Korean Parents’ Network for People with Disabilities (KPNPD) held a protest march (News1, 26 May 2022), demanding a state-run support system for families of people with developmental disabilities. On 27 May, members of eight disability advocacy organizations picketed in front of President Yoon Suk-yeol’s office, calling for better access to polling stations ahead of local elections on 1 June (YNA, 27 May 2022). Meanwhile, Solidarity Against Disability Discrimination (SADD) staged subway-riding protests throughout the week, urging the government to improve mobility rights, including demands for greater accessibility on public transportation.

Meanwhile, on 25 May, the New Zealand government announced that it would extend the deployment of New Zealand Defense Force troops in the Solomon Islands until at least May 2023, to continue providing support to the country’s security apparatus (RNZ, 27 May 2022). This follows a recent security agreement between Beijing and Honiara in April (Reuters, 25 May 2022), amid competition in the Pacific between China and the US, Australia, and New Zealand (CNN, 21 April 2022).

In China, university students continued to rally against COVID-19 restrictions last week. At China University of Political Science and Law, Beijing Normal University, and Tianjin University, students demanded the right to return to their hometowns amid ongoing restrictions. In Tianjin, students had been confined to their dorms, studying online since January (RFA, 27 May 2022). Following the protests, university students in Beijing were allowed to return home, ahead of the upcoming anniversary of the 4 June Tiananmen Square protests (SCMP, 25 May 2022).

Su Mon Thant is East Asia Pacific Assistant Research Manager at ACLED. She holds a MA in Politics and International Relations and has specialized in researching politics and society in Myanmar for over a decade.

Hangyu is an East Asia Pacific Research Manager at ACLED. He holds a BA in Global Communication and Culture and an MA in Global Studies from Albert-Ludwigs-Universitaet Freiburg and Facultad Latinoamericana de Ciencias Sociales. His research interests include political polarization in South Korea and the role of social media in politics. He is fluent in Korean, English, and Spanish.