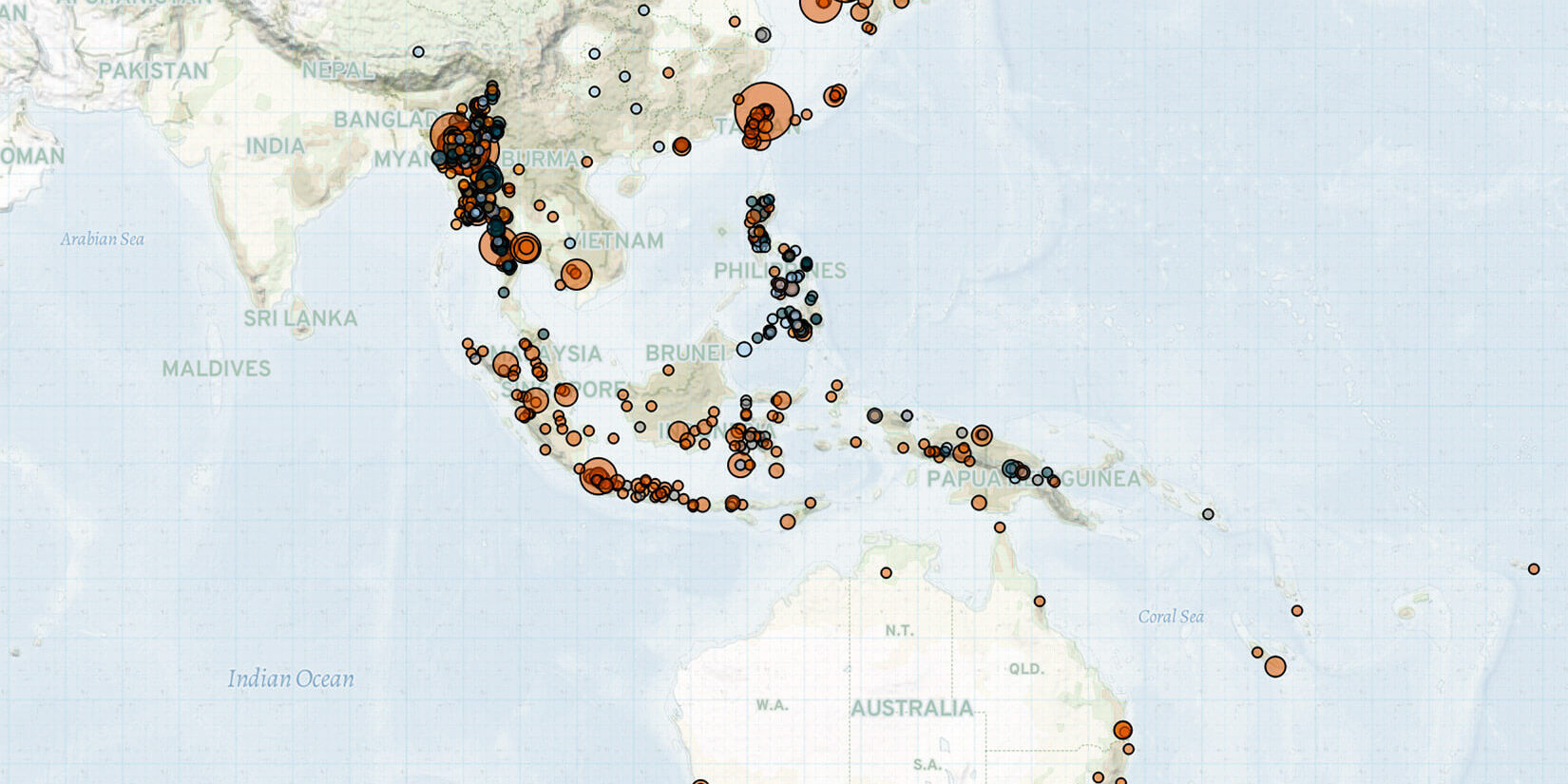 Last week in the East Asia Pacific region, the Myanmar military continued raids and attacks on civilians across the country. In the Philippines, state forces continued to carry out operations against Islamist groups in Soccsksargen. In Papua New Guinea, election-related violence emerged in the run-up to the upcoming elections between 2 and 22 in July. In Indonesia, ethnic Papuans continued to demonstrate against the proposed creation of new provinces in Papua. In Thailand, civic groups continued to protest the government’s Draft Act on the Operations of Not-for-Profit Organizations. In China, the government tightened control over political dissidents ahead of the anniversary of the Tiananmen Square protests. Meanwhile, demonstrations against COVID-19 restrictions escalated in China.

In Myanmar, the military carried out raids and attacks on civilians across the country last week, continuing offensives in Sagaing and Magway regions. The military has cut off internet access and mobile service in several townships across the two regions as it carries out operations (Myanmar Now, 30 May 2022). In Sagaing region, the military fired artillery shells in Kale township, destroying houses and a monastery in which internally displaced persons (IDPs) were sheltering, injuring seven people, including a minor. The military also killed five unarmed village lookouts in Kanbalu township on 31 May.

Meanwhile, in Magway region, it was reported this week that the bodies of six villagers were discovered near Kyauk Khwet village in Myaing township on 26 May with signs of torture and execution, including broken bones and gunshot wounds (Myanmar Now, 30 May 2022). The military abducted the victims for use as hostages and human shields two weeks prior, along with 34 other civilians from Than Chuang, Kauk Khwet, Bawton, and Baunt Bin villages along the border between Myaing and Pauk townships. Violence in Magway is both common and highly volatile; it is considered an area of ‘extreme risk’ by ACLED’s Volatility and Risk Predictability Index (as are eight other states and regions in the country).

In Yangon region, the military injured five teenagers when they rammed vehicles into a group of anti-coup protesters in Thingangyun township, before beating and arresting the protesters. On 1 June, an explosion occurred in Kyauktada township in downtown Yangon, killing a young man and injuring nine others who were waiting at the 35th street bus stop. The military claims that the deceased person was responsible for the explosion and briefly detained his mother and sister for interrogation (Myanmar Now, 2 June 2022). Local resistance groups released statements denying their involvement and claiming that the military was behind the explosion. They note that the type of C-4 explosives used in the explosion was unaffordable for any urban guerrilla groups to make (Myanmar Now, 3 June 2022).

Meanwhile, the military indicated last week it would move forward with carrying out death sentences given to a former National League for Democracy lawmaker and a veteran democracy activist for their anti-coup resistance activities (Irrawaddy, 3 June 2022). The announcement was met with international and local condemnation (Irrawaddy, 6 June 2022). Local resistance groups warned of increased operations if the executions were to go ahead (Myanmar Now, 4 June 2022). According to the Assistance Association for Political Prisoners (AAPP), the military has handed down death sentences to 114 people, including two minors, since the 1 February 2021 coup for their roles in the resistance (AAPP, 3 June 2022). Salai Tin Maung Oo, an ethnic Chin student leader, was the last political dissident to be executed in Myanmar in 1976 under the previous dictatorship (Irrawaddy, 3 June 2022).

In the Philippines, state forces launched operations last week against Dawlah Islamiyah militants suspected of carrying out recent bombings in Soccsksargen. During these operations, a Dawlah Islamiyah – Maguindanao Group militant was killed in a clash with the military in M’lang town, Cotabato province, Soccsksargen. The military has marked the Maguindanao Group and the Toraife Group as the Dawlah Islamiyah factions responsible for the recent bombings in Soccsksargen (Sunstar, 2 June 2022; Rappler, 26 May 2022). ACLED’s Subnational Surge Tracker first warned of increased violence to come in Soccsksargen in the past month. A number of Islamic State-inspired groups in the southern Philippines have been fighting under the name and banner of Dawlah Islamiyah during the past decade (International Crisis Group, 27 June 2019). This violence contributed to the 49% increase in violence in the Philippines in the past month relative to the past year flagged by ACLED’s Conflict Change Map, which first warned of increased violence to come in the country in the past month.

In Papua New Guinea, election-related violence surfaced last week in the run-up to the national elections scheduled for 2 to 22 July. In the Southern Highlands, on 2 June, unknown assailants attempted to assassinate a regional candidate of the People’s National Congress. To bolster security ahead of the upcoming general election, approximately 5,000 military and police personnel have been deployed to the seven provinces of the Highlands region since March (Post Courier, 31 March 2022). The previous general elections held in 2017 were one of the most violent in recent history, with 204 deaths recorded during the election period (The Guardian, 30 October 2018).

Meanwhile, in Indonesia, ethnic Papuans took to the streets to demonstrate against the revised Papua Special Autonomy Law and the proposed creation of new administrative provinces on the island, demanding a referendum on Papuan independence. In July 2021, the central government passed a revision of the Special Autonomy Law, a move which further strengthened the central government’s control over Papua (IPAC, 23 December 2021). Demonstrations were dispersed by police in several locations in Papua province, including in Jayapura, Merauke, Timika, and Nabire. State forces also arrested dozens of people, claiming that demonstration organizers did not have permits (Kompas, 3 June 2022). In Sorong city, West Papua, police fired shots and tear gas at demonstrators after demonstrators burned tires. The latest demonstrations come after President Joko Widodo signed a presidential letter in mid-May allowing the parliament to finalize a bill that enables the creation of new provinces in Papua (BBC Indonesia, 20 May 2022).

In Thailand, protesters from various civic groups held a second week of mass demonstrations in front of the UN headquarters in Bangkok to protest the government’s Draft Act on the Operations of Not-for-Profit Organizations. Opponents of the bill argue that it would violate rights to freedom of association and freedom of expression since it would enable officials to order the temporary or permanent shutdown of any non-profit organization. They demand the cabinet agree to scrap the draft (Prachatai, 31 May 2022).

In China, authorities tightened security last week to prevent any form of public commemoration ahead of the 33rd anniversary of the Tiananmen Square protests on 4 June. Dozens of political dissidents, rights lawyers, and advocates were taken on a so-called ‘mandatory vacation’ and held incommunicado by the police last week (Radio Free Asia, 31 May 2022). In Hong Kong, the government banned an annual candlelight vigil for the third consecutive year by pro-democracy groups. Police closed off sections of Victoria Park starting on 3 June and prohibited any solo vigils attended by individuals around the park (HKFP, 3 June 2022).

Meanwhile, large-scale demonstrations against COVID-19 restrictions spread outside Beijing. On 1 June, thousands of residents clashed with police at a security checkpoint in Yanjiao township, a commuter town near Beijing (South China Morning Post, 2 June 2022). They demand the lifting of coronavirus controls that have restricted the ability of commuter workers to enter Beijing for months. Following the protests, authorities eased restrictions (South China Morning Post, 2 June 2022). The violence associated with COVID-19 restrictions contributes to the 180% increase in violence in China over the past week relative to the past month that is flagged by ACLED’s Conflict Change Map.