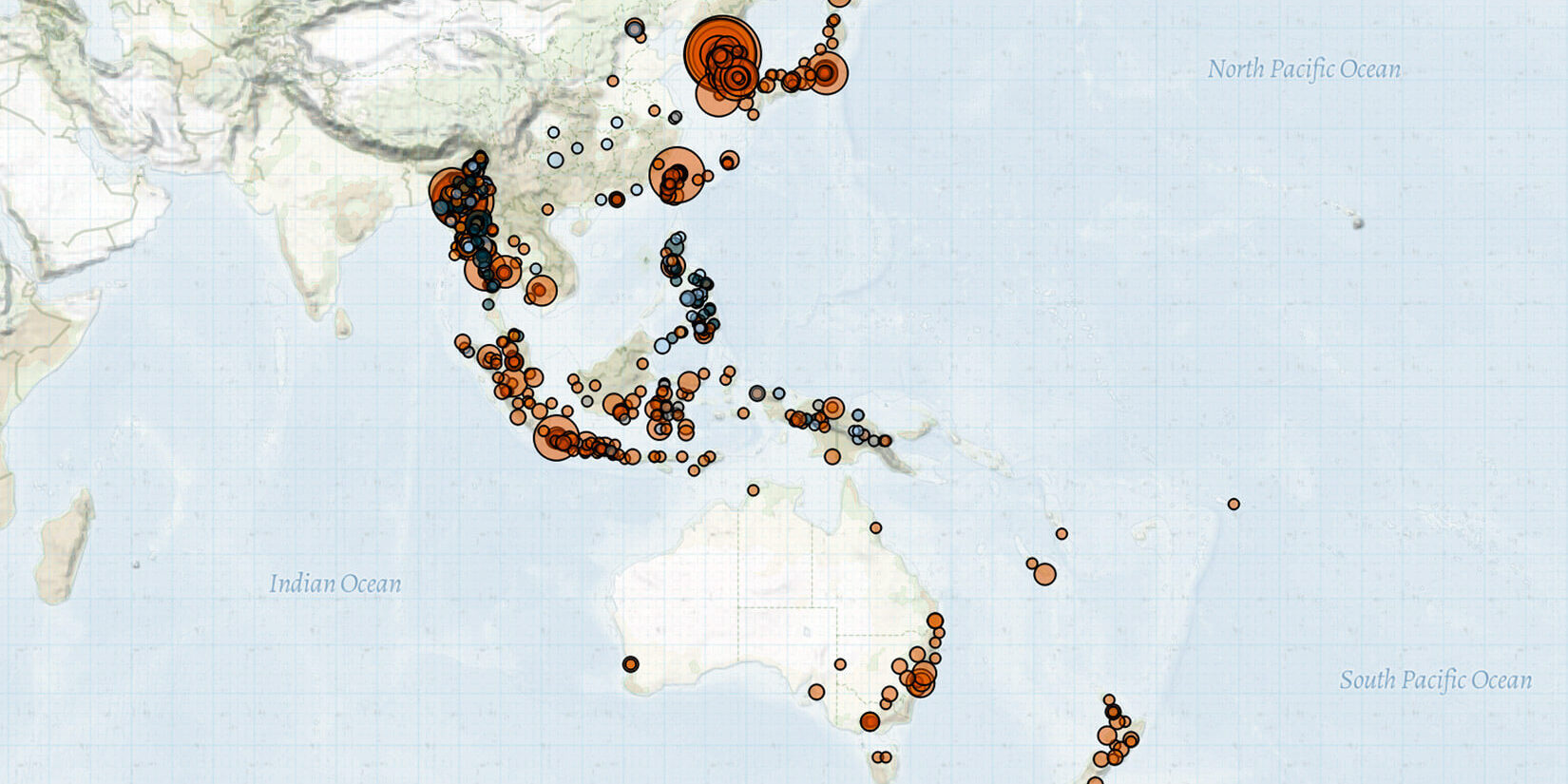 Last week in the East Asia Pacific region, local defense groups coordinated attacks against police stations in multiple parts across Myanmar, and attacks against civilians continued. In the Philippines, the spokesperson of the Islamic State (IS) East Asia was killed by the military in an operation in Mindanao. In Papua New Guinea, communal clashes erupted in Wewak, East Sepik province. In Indonesia, ethnic Papuans continued to demonstrate against the proposed creation of new provinces in the region. In Thailand, two explosions were set off by suspected separatists targeting state forces and local infrastructure in Narathiwat province. North Korea conducted its 18th missile test of the year. In South Korea, workers affiliated with the Korean Confederation of Trade Unions (KCTU) held mass rallies to demand guaranteed minimum wage for truck drivers. In Australia, public servants marched across New South Wales to demand higher wages.

In Myanmar, local defense groups coordinated attacks against police stations in Sagaing, Magway, Mandalay, and Tanintharyi regions, and Kayah state. In Magway region, a combined force of nine resistance groups raided and torched a police station in Kaing Lel village of Pauk township, before clashing with relieving military forces. A policeman and two members of the combined force were killed in the clash (DVB, 7 June 2022). On 8 June, the Pakokku People’s Defense Force attacked a police station in Kya Htoe village in Kamma township and both sides suffered considerable casualties after the arrival of military reinforcements (Myanmar Now, 9 June 2022). Violence in Magway is both common and highly volatile; it is considered an area of ‘extreme risk’ by ACLED’s Volatility and Risk Predictability Index, as are seven other states and regions in the country.

In Mon state, the People’s Defense Organization – Mawlamyine shot and killed a staff member of the World Health Organization (WHO) in Mawlamyine township, whom they claim was a military informant and a relative of a senior military officer. The UN condemned the killing in a statement (Al Jazeera, 9 June 2022).

In Kachin state, the Kachin Independence Organization/Kachin Independence Army (KIO/KIA) attacked and reoccupied a military base with 30 military soldiers in Pan Hkaw Yang area of Shwegu township on 5 June. It was a former KIO/KIA base occupied by the military in 2014 (Kachin News Group, 6 June 2022). The KIO/KIA also engaged in intense fighting with the military last week in three other locations: Mohnyin, Tanai, and Sumprabum townships. The KIO/KIA carried out mine attacks against military columns and vehicles between 4 and 7 June in Mohnyin township as they advanced towards the KIO/KIA’s area, inflicting casualties (Kachinland News, 10 June 2022). These trends contribute to the 105% increase in violence in Kachin last week relative to the past month flagged by ACLED’s Subnational Surge Tracker. The Subnational Tracker first warned of increased violence to come in Kachin in the past month.

Meanwhile, the military continued to attack civilians across the country. In Sagaing region, the military opened fire on villagers in Kan Phyar village, Myinmu township. The attack occurred after the villagers refused to take soldiers to a nearby village on their motorcycles or to give up the name of the owner of a motorcycle the military claimed to have found a gun in. The military forced 30 male villagers present to begin running and shot at them after 10 seconds, reflecting the military’s deliberate targeting of civilians. At least six villagers were killed and several were injured in the attack (Myanmar Now, 8 June 2022). Among those killed was a 16-year-old boy with a mental disability; the UN Special Rapporteur on the Situation of Human Rights in Myanmar released a report this week documenting the military’s ongoing targeting of children since the military coup (Irrawaddy, 15 June 2022). Also in Sagaing region, the bodies of six civilians, including a local volunteer arrested by a military column, were discovered between 3 and 5 June in Kani township. Three of them had their hands tied behind their backs and suffered injuries from torture before being killed.

Last week in the Philippines, the military killed a senior Islamist militant during an operation in Datu Saudi-Ampatuan town, Maguindanao province, Bangsamoro Autonomous Region in Muslim Mindanao (BARMM). The military claim that the deceased militant, Abdulfatah Omar Alimuden (alias: Abu Huzaifah), served as the IS East Asia spokesperson and managed financial transactions between the central IS leadership and Dawlah Islamiyah (Philippine News Agency, 7 June 2022). Various IS-inspired groups have been fighting in Mindanao under the Dawlah Islamiyah name over the past decade (International Crisis Group, 27 June 2019). The operation was part of the government’s response to a series of attacks by IS-inspired militants in recent weeks (Rappler, 26 May 2022). ACLED’s Subnational Threat & Surge Trackers first warned of increased violence to come in the BARMM in the past month.

In Papua New Guinea, violence erupted last week between two communal groups in Wewak, East Sepik province, following the death of a youth during a fight at a local volleyball game on 5 June. The next day, communal militiamen retaliated and killed three members of the other community. The reprisal attack ultimately led to intense fighting between the two groups in Wewak on 9 June, leading to an unknown number of deaths. Intercommunal violence has been a prevalent issue in the country, and is fueled by factors such as land ownership disputes, easy access to weapons, and a lack of adequate law enforcement and dispute resolution mechanisms (USIP, 5 April 2022).

In Indonesia, ethnic Papuans continue to demonstrate against the proposed creation of new administrative provinces in Papua. In Makassar, a demonstration turned violent as a Muslim nationalist group, the Indonesian Muslim Brigade (BMI), intervened and engaged in scuffles with demonstrators. Several people were injured.

In the Deep South of Thailand, the situation in the southern border provinces remained tense amid the detonation of multiple explosives in Narathiwat province last week. On 8 June, suspected Malay Muslim separatists detonated three bombs hidden in a gas tank and destroyed light poles in the Ra-Ngae district. On 10 June, a further six bombs went off on the side of a road in Taya village, targeting rangers, village security team, and volunteer defense corps. No casualties were reported in either incident. Despite the peace negotiations and a temporary truce between the Thai government and Barisan Revolusi Nasional Melayu (BRN) during Ramadan in May, unrest continues in the southern border provinces of the country.

North Korea conducted its 18th test missile launch in 2022 last week. On 5 June, eight short-range ballistic missiles were test-fired from multiple locations near Pyongyang towards the ocean off the country’s east coast (AP, 5 June 2022). The test comes a day after South Korea and the US ended three-day joint military exercises (AP, 4 June 2022). In response to the missile tests, South Korea and the US fired eight surface-to-surface missiles off South Korea’s east coast on 6 June and flew warplanes on 7 June over waters around the Korean peninsula (Channel News Asia, 6 June 2022; Channel News Asia, 7 June 2022).

In Australia, public servants in New South Wales staged a statewide strike and protested, demanding higher wages and better working conditions. The protests come as all public service workers were offered a pay increase of 3%, far below the current inflation rate of 5.2% (Sky News, 8 June 2022).