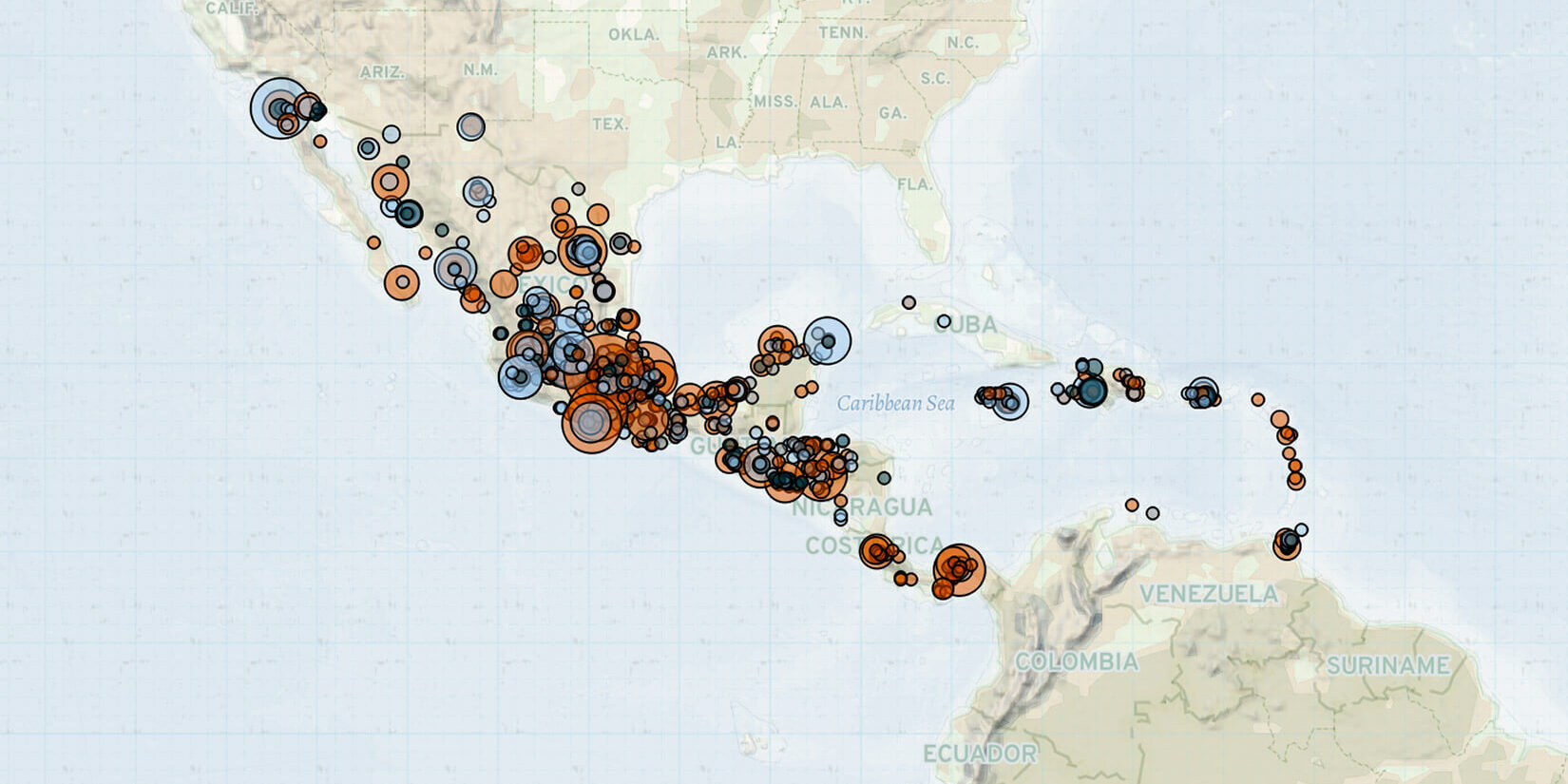 In Guatemala, political violence increased last week amid an upsurge in attacks against civilians, including social activists. On 7 June, two armed assailants shot and killed a land defender and member of CODECA in Morales, Izabal department (Prensa Comunitaria, 8 June 2022). Before his killing, the victim had received multiple threats over a land dispute in the Navajoa community, where he was leading the fight for land reclamations and rejecting the division and commercialization of lands in the community (APC Bolivia, 8 June 2022). Local organizations have denounced the state’s failure to prosecute attacks against farmers and members of CODECA (FIDH, 28 September 2021).

Elsewhere, in Jutiapa department, unidentified attackers shot and killed five people during a social gathering in El Coco village on 4 June. The perpetrators of the attack remain unclear, with conflicting reports emerging about the targets of the attack. While some reports suggest that the attack targeted a suspected member of a local self-defense group, other reports suggest that the attack was related to a dispute between local criminal groups (Soy 502, 7 June 2022). Such violence contributed to the 91% increase in violence in Guatemala last week relative to the past month flagged by ACLED’s Conflict Change Map, which first warned of increased violence to come in the country in the past month.

Meanwhile, national authorities declared a state of siege on 8 June in Ixchiguán and Tajumulco municipalities in San Marcos department, restricting mobility in this area and enlarging state forces’ powers to carry out security operations (El Diario.es, 9 June 2022). This measure was implemented in response to the continuous clashes between armed members of Ixchiguán and Tajumulco communities (Prensa Libre, 8 June 2022). Following the declaration of the state of siege, there was a clash between these two communities that left a civilian injured. The origin of this territorial dispute goes back to the creation of the Ixchiguán municipality in 1933 (La Hora, 6 January 2022). National authorities have also attributed the perpetuation of this conflict to increasing disputes between organized criminal groups operating on the border with Mexico (Prensa Libre, 14 June 2022; Mazatecos, 9 June 2022).

In Honduras, unidentified attackers shot and killed an LGBT+ human rights activist last week in San Pedro Sula, Cortés department. The Office of the United Nations High Commissioner for Human Rights in Honduras (OHCHR) condemned the killing, urging national authorities to conduct an impartial investigation (OACNUDH, 10 June 2022). According to UN representatives, members of the LGBT+ community in Honduras continue to be subjected to violence on the basis of their sexual orientation and gender identity (Reportar sin Miedo, 24 March 2022). In recent weeks, President Xiomara Castro had announced the implementation of criminal investigation protocols and the refinement of data collection tools to monitor and prosecute attacks against the LGBT+ community in the country (Human Rights Watch, 13 May 2022). The killing comes as the LGBT+ community commemorates LGBT+ Pride Month in June.

In Mexico, gang violence intensified in Colima state last week with attacks against civilians, including attacks against low-rank government officials and off-duty police officers. In Villa de Álvarez, armed suspects shot and killed an off-duty police officer, while armed men attacked an officer of the judicial system in Manzanillo. The majority of attacks last week occurred in the neighboring cities of Colima and Villa de Álvarez, resulting in at least 14 fatalities. Following last week’s violence, the mayor of Villa de Álvarez claimed that she would seek to approve new regulations to allow police officers to carry their service guns while they are off-duty as a measure to guarantee their security (El Universal, 7 June 2022). Off-duty police officers have faced heightened targeting by gangs in Mexico (AP, 30 May 2021). These incidents contributed to the 137% increase in violence in Colima over the past week relative to the past month, as flagged by ACLED’s Subnational Surge Tracker. Violence in Colima has intensified following the breakdown in February of an alliance between the Los Mezcales gang and the Jalisco New Generation Cartel (CJNG).

Elsewhere, in San Luis Potosí state, gang violence continued last week, although to a lesser extent than the week prior. The Operativa Bélica gang, a local ally of the CJNG, tortured and killed seven men before dumping their bodies in Aquismón municipality with threatening messages. ACLED’s Subnational Surge Tracker first warned of increased violence to come in San Luis Potosí in the past month. The Gulf Cartel and the CJNG currently dispute control of drug trafficking in San Luis Potosí, which is the gateway to northern states bordering the United States (La Opinion, 28 April 2022).

Meanwhile, election-related violence was reported in Oaxaca and Tamaulipas states as gubernatorial elections were held in six states on 5 June. In Oaxaca, the polling day was met with social unrest in Ciudad Ixtepec, Miahuatlan de Porfirio Diaz, Salina Cruz, San Juan Guichicovi, and San Miguel del Puerto municipalities, where residents set fire to electoral urns and ballots. This was done as part of demonstrations against the lack of rapid response and support from authorities to Hurricane Agatha and a lack of solutions to land conflicts. Similarly, in Reynosa, Tamaulipas, two men locked several people inside a polling place in an attempt to prevent them from casting votes while a group of armed men stole ballot boxes with votes. Representatives of the ruling ​​National Regeneration Movement (MORENA) won the governorships in Quintana Roo, Oaxaca, Hidalgo, and Tamaulipas, and now hold power in 22 of the 32 states of Mexico (Infobae, 6 June 2022).

In Jamaica, violence increased last week compared to the week prior, driven by attacks against civilians carried out by gangs and armed groups. These attacks contributed to the 56% increase in violence in Jamaica in the past month relative to the past year, flagged by ACLED’s Conflict Change Map, which first warned of increased violence to come in the country in the past month. Multiple attacks left three people dead in Kingston, driving the 129% increase in violence in the parish over the past week relative to the past month, as flagged by ACLED’s Subnational Surge Tracker. Meanwhile, armed men wearing police disguises carried out a drive-by shooting attack in Spanish Town, Saint Catherine parish, killing four people.

In Puerto Rico, violence remained at high levels last week amid attacks by armed assailants, including the killings of two people in separate attacks in the neighborhood of Santurce, San Juan municipality. Meanwhile, in San Lorenzo municipality, two unidentified assailants beat a man and shot at his vehicle. While violence in this municipality has not been common, it has become increasingly volatile, resulting in a shift from a place of ‘low risk’ to being considered an area of ‘growing risk’ by ACLED’s Volatility and Risk Predictability Index. According to authorities, this violence is related to the actions of criminal groups that seek to control the local drug market (EFE, 17 January 2022). Last week, around 60 people were arrested during police security operations for alleged involvement in drug trafficking activities in the rural areas of the island (Swissinfo, 7 June 2022).