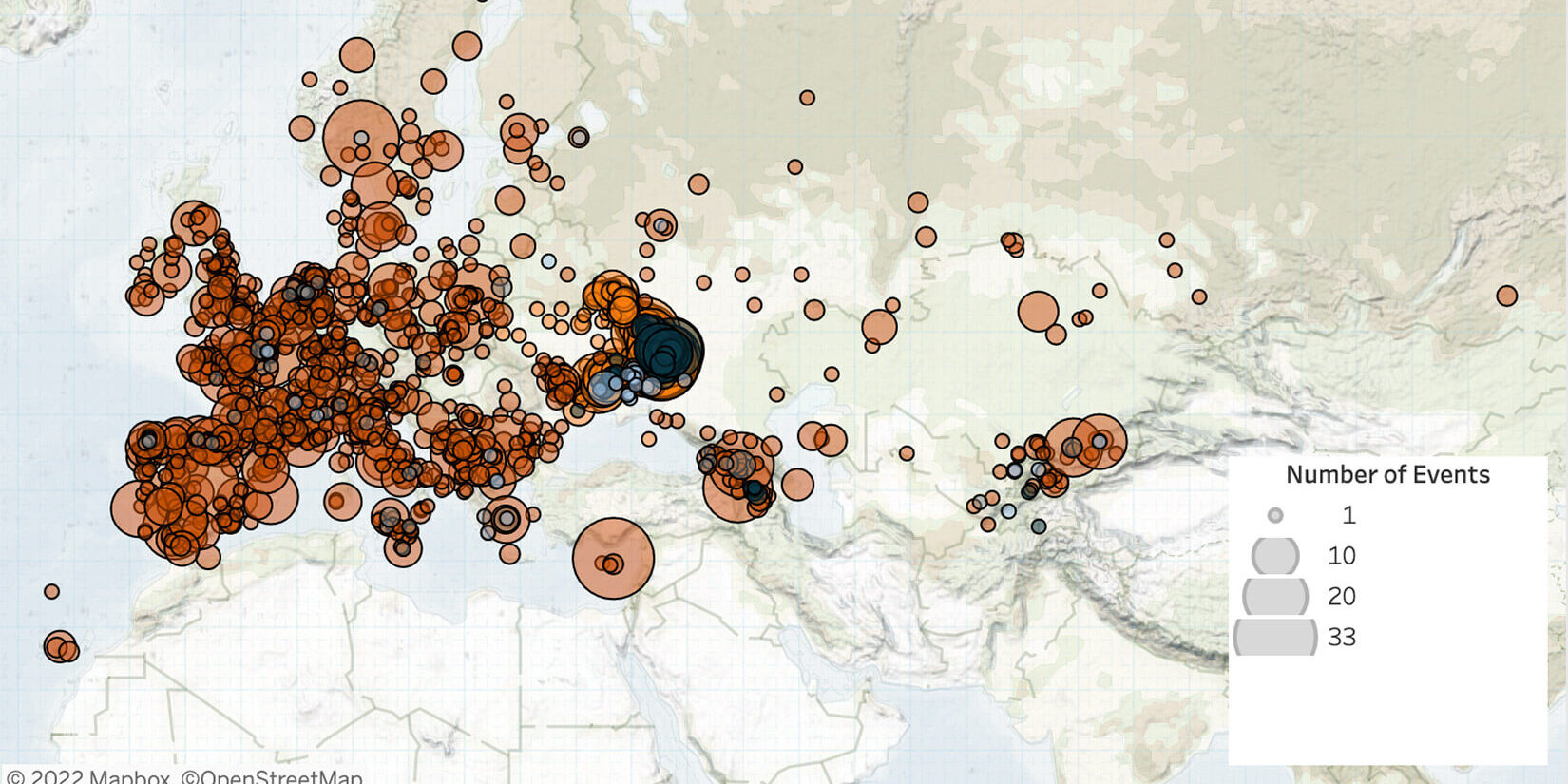 Last week in Europe, the Caucasus, and Central Asia, fighting between Russian and Ukrainian forces continued, as the Russian military invasion of Ukraine entered its fifth month. Demonstrations in solidarity with Ukraine continued in several countries across Europe, as anti-war activists carried out acts of railway sabotage in Russia. Meanwhile, demonstrations against a proposed constitutional amendment in Uzbekistan were met with violence. LGBT+ Pride marches continued after last week’s deadly shooting in Norway, while solidarity demonstrations condemning the US Supreme Court’s decision to overturn Roe v. Wade, restricting rights to abortion in the US, were reported in several countries. Farmers continued to demonstrate against plans to restrict nitrogen emissions in the Netherlands and Belgium.

In Ukraine, fighting between Russian and Ukrainian forces continued in the eastern and southern regions last week. Fighting in the Donetsk region accounts for almost half of all violence recorded in Ukraine last week. Russian forces continued to try to encircle Lysychansk, the last large city in the Luhansk region under Ukrainian control, with heavy fighting persisting throughout the week; on 3 July, Ukrainian forces withdrew from Lyschansk.1 This piece focuses on events up to Friday, 1 July. The withdrawal of Ukrainian forces from Lysychansk on 3 July is outside of the time period of this piece and will be covered in next week’s Regional Overview.

In the Black Sea, Russian forces retreated from Zmiinyi Island (Snake Island) that had been under Russian control since the beginning of the full-scale invasion on 24 February, following several successful attacks by Ukrainian forces. Russian occupation of the island supported the blockade of ports in the Odesa region, which has contributed to worsening global food supply disruptions (BBC, 30 June 2022; The Guardian, 31 May 2022). On 1 July, a day after the retreat, Russian forces struck Zmiinyi Island with phosphorous bombs and also fired missiles at residential houses in a coastal settlement of Serhiivka in the Odesa region, killing at least 21 civilians (Reuters, 1 July 2022). These trends contribute to the 357% increase in violence in the Odesa region last week relative to the past month flagged by ACLED’s Subnational Surge Tracker; the tool first warned of increased violence to come in the region in the past month.2Amid the ongoing invasion of Ukraine, changes in the media landscape, inaccurate or delayed reporting on active fighting, and the pullout of international monitors from the country all present difficulties for tracking political violence, especially in real time; these challenges should be taken into account when using any real-time data on this context, including from ACLED.

Meanwhile, Russian forces continued to target civilians with shelling, airstrikes, and missile attacks across the country last week. On 27 June, a Russian missile hit a shopping mall with around 1,000 people inside in Kremenchuk in the Poltava region, killing at least 20 people, with many more still missing (RFE/RL, 30 June 2022). In addition to Russian strikes on Serhiivka and Kremenchuk, at least 50 more civilians were killed by Russian forces in various cities, including Kharkiv, Lysychansk, Mykolaiv, and Kyiv.3Fatality numbers are frequently the most biased and poorly reported component of conflict data; they can vary considerably and are often the subject of debate given the strategic incentives to over- or underestimate these numbers, as well as the significant logistical difficulties in collecting accurate data, among other factors (for more, see this piece by ACLED in Washington Post, 2 October 2017).

Additionally, Ukraine and Russia agreed to a prisoner exchange last week. On 28 June, 16 Ukrainian soldiers and one civilian returned to Ukraine in exchange for 15 prisoners captured by Ukraine. The next day, Russia released 144 more Ukrainian soldiers, including 95 servicemen captured during the surrender of Mariupol in May (The Guardian, 29 June 2022).

Demonstrations against the war and in solidarity with Ukraine took place in Belgium, Germany, Italy, Montenegro, Norway, Poland, Portugal, and Spain last week.

In Russia, two acts of railway sabotage were carried out by anti-war activists, one of which temporarily paralyzed the movement of the Trans-Siberian Railway (Activatica, 30 June 2022). Two anti-war partisan movements – the Combat Organization of Anarchist Communists and the Ostanovi Vagony (Stop the Railcars) movement – claim responsibility for these acts, stating that they aim to disrupt the movement of Russian military equipment to Ukraine (Activatica, 28 June 2022).

In Uzbekistan, thousands of people took to the streets in several cities in the Karakalpakstan region on 1 July to demonstrate against a draft constitutional amendment that would remove the region’s right to seek independence (BASE, 1 July 2022). Protests in the regional capital Nukus were initially peaceful but were met with police violence during the night between 1 and 2 July (RFE/RL, 5 July 2022).4This piece focuses on events up to Friday, 1 July. Events in Karakalpakstan that happened on 2 July and afterward are outside of the time period of this piece and will be covered in more detail in next week’s Regional Overview. Authorities later claimed that the demonstrations that started on Friday and continued throughout the weekend led to fatalities among both the demonstrators and police (RFE/RL, 4 July 2022). According to the amendment proposed by Uzbek President Shavkat Mirziyoev, Karakalpakstan would retain its autonomy but would lose the option to secede through a referendum among the region’s residents, including the Karakalpaks ethnic minority (RFE/RL, 27 June 2022; Al Jazeera, 2 July 2022).

Meanwhile, in the Netherlands, farmers’ ongoing discontent with the government’s plans to cut nitrogen emissions escalated into more than a hundred demonstration events across the country last week. Dutch farmers argue that the plan to halve nitrogen emissions by 2030 will force some out of business (Bloomberg, 28 June 2022). Targeting highways, demonstrators slowed down traffic with tractors or by burning hay bales. Demonstrations also took place at the residences of several politicians, including the Dutch Minister of Nature and Nitrogen. While the majority of events remained mainly peaceful, clashes occurred on several occasions when police attempted to stop the farmers. These trends contribute to the increase in violence in the Netherlands over the past week relative to the past month that is flagged by ACLED’s Conflict Change Map. Similarly, farmers in Belgium continued to protest the new Flemish nitrogen policy, which is also aimed at reducing emissions.