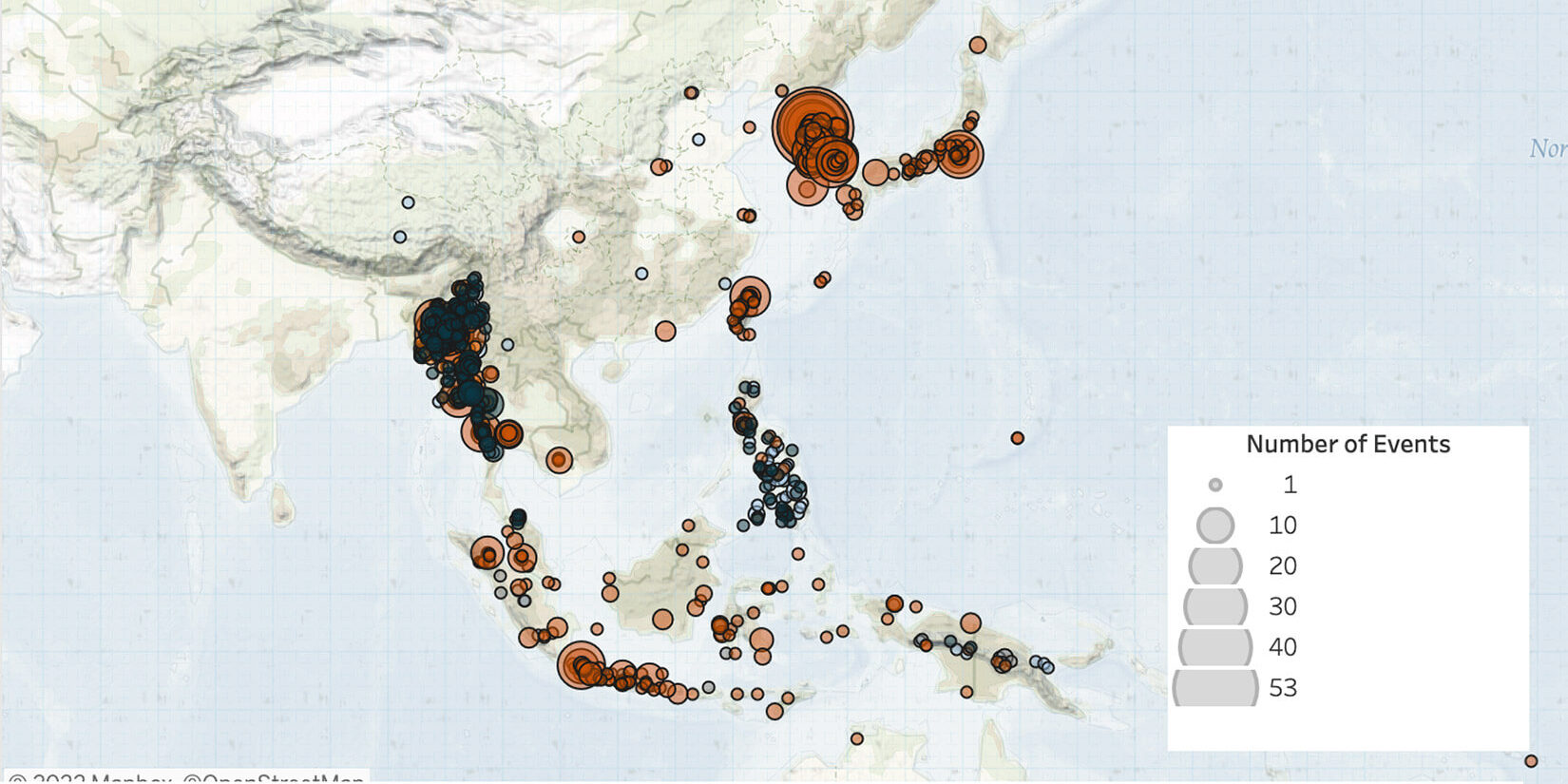 Last week in the East Asia Pacific region, the Myanmar military clashed with the United League of Arakan/Arakan Army (ULA/AA) in Rakhine state and the Kachin Independence Organization/Kachin Independence Army (KIO/KIA) in Kachin state. Meanwhile, anti-coup protesters marked the 75th Martyrs’ Day on 19 July with demonstrations across multiple regions. In Papua New Guinea, tribal conflicts intensified during the third week of the national election, which ran between 4 and 22 July. In Indonesia, there was a spike in violence involving the separatist West Papua National Liberation Army (TPNPB). In the Philippines, fighting between the New People’s Army (NPA) and state forces intensified, while a clash between Islamist rebels and the military was also reported. In South Korea, Daewoo Shipbuilding & Marine Engineering (DSME) subcontracted workers ended their 51-day strike after reaching an agreement with the company.

In Myanmar, fighting broke out between the military and ULA/AA in Rakhine state last week. On 18 July, the ULA/AA attacked a combined force of military soldiers and border guard police in Maungdaw township, capturing 14 personnel, including a police major (Myanmar Now, 19 July 2022). Following the battle, the military arrested civilians and local administrators in Maungdaw township (Irrawaddy, 22 July 2022). Tensions between the military and ULA/AA have escalated since early July, with both sides engaging in retaliatory arrests, and the military conducting an airstrike against a ULA/AA outpost in Kayin state. The ULA/AA claimed last week’s attack was in response to the airstrikes in Kayin state (Myanmar Now, 19 July 2022). These trends contribute to the 126% increase in violence in Rakhine in the past month relative to the past year flagged by ACLED’s Subnational Threat Tracker. The Subnational Tracker first warned of increased violence to come in Rakhine in the past month.

In Kachin state, fighting continued between the KIO/KIA and the military last week. The military conducted airstrikes with two military jets against the KIO/KIA in Hpakant township on 18 July, following heavy military losses in a battle the day prior. The Shanni Nationalities Army (SNA) was alleged to have fought alongside the military on the first day of the battle, a charge the SNA denies (Myanmar Now, 19 July 2022). Meanwhile, the military, alongside a pro-military ‘people’s militia,’ attacked a KIO/KIA camp in Tanai township on 18 July, leaving two KIO/KIA soldiers dead (BNI, 21 July 2022).

Elsewhere, in Kayin state, Saw Nerdah Mya, a former commander-in-chief of the Karen National Defense Organization (KNDO), which operates under the Karen National Union (KNU), declared the formation of a new armed group, the Kawthoolei Army, on 19 July. This has caused friction with the KNU, which refuses to recognize the new group (Myanmar Now, 21 July 2022). It is not yet clear how the formation of the new group will impact conflict in the area. Violence in Kayin is both common and highly volatile; it is considered an area of ‘extreme risk’ by ACLED’s Volatility and Risk Predictability Index.

In Sagaing region, the military continued attacks on civilians last week. In Kanbalu township, 10 civilians were reportedly killed and around 500 homes were razed during a military raid on Kyi Su village, a predominantly Muslim village, on 18 July (Radio Free Asia, 20 July 2022). In Yinmarbin township, the military and the pro-military militia Pyu Saw Htee arrested around 70 villagers, including 10 children and five elderly people, on 16 July and held them in a village school. The elderly villagers were released on the same day after paying a ransom, while the rest continued to be held (Radio Free Asia, 20 July 2022).

Meanwhile, anti-coup protests commemorating the 75th Martyrs’ Day on 19 July were reported in Yangon, Mandalay, Sagaing, Tanintharyi, and Magway regions, as well as in Kachin state. In Yangon, prison guards beat two young political prisoners who requested permission to commemorate Martyrs’ Day. One of the prisoners sustained critical injuries and was taken to the hospital, while another was held in solitary confinement (Myanmar Now, 21 July 2022). Martyrs’ Day is a national holiday in Myanmar marking the 1947 assassination of the country’s independence leaders, including national hero Bogyoke Aung San, during a cabinet meeting in Yangon.1The military execution of four political dissidents, who had been on death row, over the weekend — which led to widespread local and international condemnation (The Guardian, 26 July 2022) and sparked demonstrations both in the country and internationally — will be included in next week’s data release and Regional Overview; this Regional Overview covers events occurring between 16 and 22 July 2022.

In Papua New Guinea, tribal conflicts intensified during the third week of the national election last week, resulting in the deaths of dozens of people and the sexual assault of a teenage girl. At least 18 people were killed in Enga province in tribal clashes, which reignited amid the election polling period that ended on 22 July. These trends contribute to the 129% increase in violence in Enga province last week relative to the past month flagged by ACLED’s Subnational Surge Tracker. Tribal conflicts are a long-standing issue in the area and have been triggered by issues ranging from electoral outcomes to generational land disputes or personal altercations. A recent UN report condemned the escalation of violence across the Highlands region over the election period, which led to the displacement of over 3,000 people in Enga province alone (UN, 21 July 2022). Meanwhile, in the Western Highlands province, unidentified armed assailants ambushed a vehicle at a roadblock in Tomba in an election-related attack, killing four people. Violence in both Enga and the Western Highlands has become increasingly volatile, resulting in a shift in both from places of ‘low risk’ to being considered areas of ‘growing risk’ by ACLED’s Volatility and Risk Predictability Index.

In Indonesia, the TPNPB launched a series of attacks against civilians last week, following the Indonesian government’s recent decision to split the two existing Papuan provinces into five. On 16 July, TPNPB rebels opened fire on a truck carrying non-ethnically Papuan civilians in Nogolait village, Kenyam district, Nduga regency, killing 11 people. The rebels attacked the civilians after a resident of Nogolait village recorded a video of TPNPB members raising the separatist Morning Star Flag (Jubi, 18 July 2022). Several clashes between the rebels and state forces were also reported throughout the week in Nduga regency following the attack. Meanwhile, two attacks on non-ethnically Papuan miners were reported last week in Yahukimo and Pegunungan Bintang regency, Papua province. The TPNPB is opposed to central government activities in the region and targets people accused of working for the government, including teachers, health workers, construction workers, and public transportation drivers (Kompas, 14 July 2022). These trends contribute to the 300% increase in violence in Papua last week relative to the past month flagged by ACLED’s Subnational Surge Tracker. The Subnational Tracker first warned of increased violence to come in Papua in the past month.

In the Philippines, state forces clashed with both communist and Islamist rebels in several regions last week. The communist NPA and state forces engaged in firefights in Calabarzon, Central Visayas, Eastern Visayas, and Caraga. The fighting resulted in several fatalities, including a girl herding goats who was caught in the crossfire. In Eastern Visayas, a government soldier was killed when NPA militants detonated anti-personnel mines in Catubig town, Northern Samar province. Meanwhile, on 18 July, a Bangsamoro Islamic Freedom Fighters (BIFF) sub-leader from the Karialan faction was killed during a firefight with the military in Shariff Saydona Mustapha town, Maguindanao province, Bangsamoro Autonomous Region in Muslim Mindanao. ACLED’s Conflict Change Map first warned of increased violence to come in the Philippines in the past month.

In South Korea, DSME subcontracted workers ended a 51-day strike on 22 July, which began on 2 June, after workers reached an agreement with DSME management to raise their wages and to guarantee their jobs (Reuters, 22 July 2022). Prior to the end of the strike, workers held a series of protests nationwide. On 20 July, about 12,000 protesters affiliated with the Korean Confederation of Trade Unions (KCTU) staged rallies at Seoul and Geoje (Seoul Shinmun, 20 July 2022).