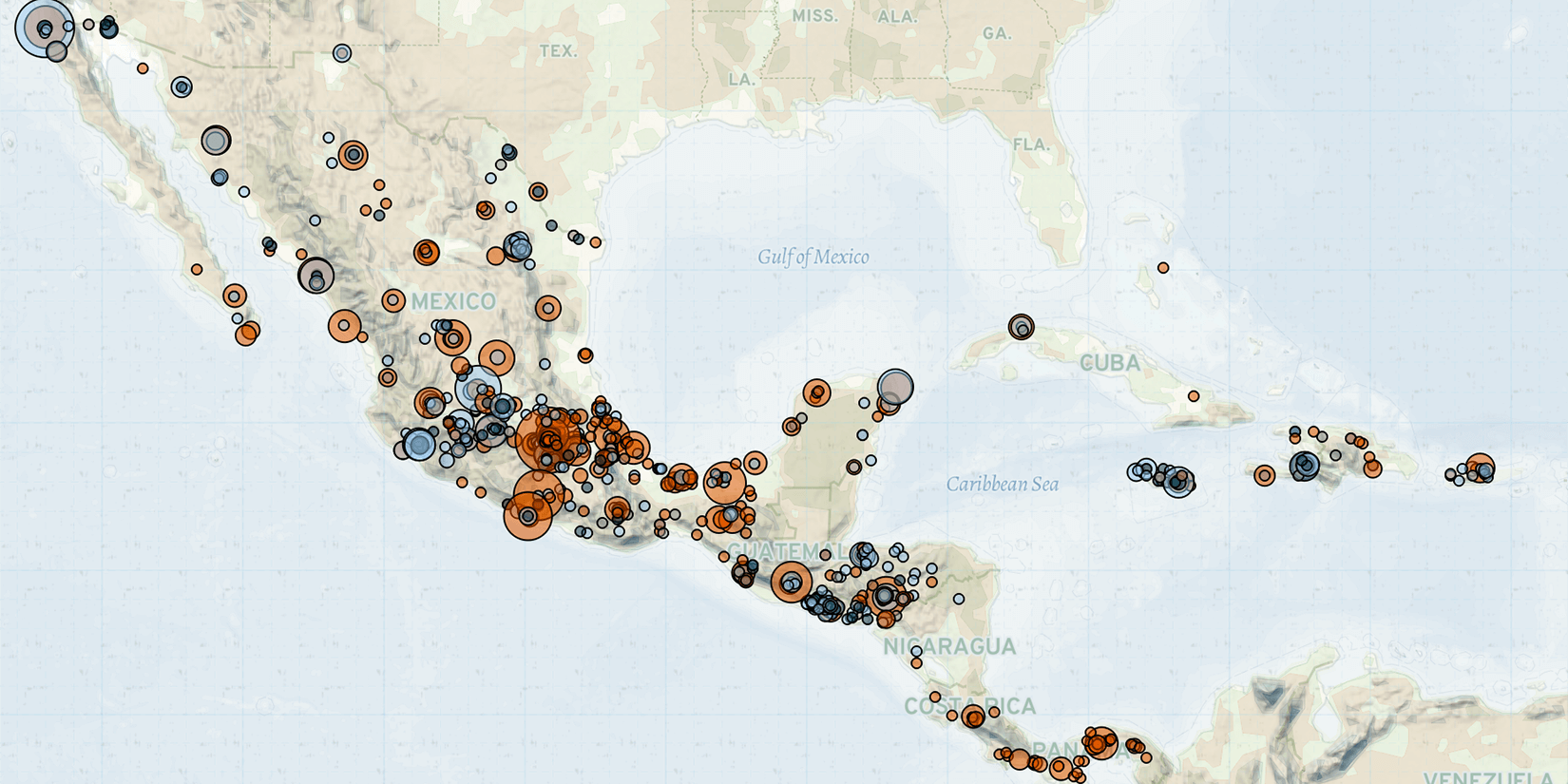 Last week in Mexico, Central America, and the Caribbean, political violence remained high amid gang attacks against civilians across the region. In El Salvador, a spike in violence against civilians last week was followed by the government declaration of a state of siege and security operations in which many gang members were arrested. In Mexico, a Los Correa gang attack against a leader of the Jalisco New Generation Cartel (CJNG) resulted in 20 deaths in Michoacán state, while gang violence increased in Sinaloa state. Elsewhere, members of a migrant caravan clashed with national guard officers in Chiapas state. In Trinidad and Tobago and in Jamaica, attacks against civilians by armed suspects continued at high levels last week. In Haiti, police interventions in anti-government demonstrations left one person dead and several others injured.

Last week, El Salvador experienced an unprecedented surge of violence prompted by gang-related attacks across the country. Attacks carried out by gang members against civilians spiked on 26 March; twice as many attacks were reported on 26 March than during January and February 2022 combined. Violent incidents were recorded in almost all the departments of the country, with the majority of attacks occurring in the central departments of La Libertad, San Salvador, and Sonsonate. This violence contributed to the 462% increase in violence in El Salvador last week relative to the past month flagged by ACLED’s Conflict Change Map, which first warned of increased violence to come in the country in the past month. Experts and local media have attributed this escalation of violence to a breach of under-the-table negotiations between President Nayib Bukele’s administration and criminal groups to curb violence in exchange for privileges for imprisoned gang members (DW, 31 March 2022). These allegations, however, have been denied by President Bukele (BBC, 31 March 2022).

In response to the spike in violence, the legislative assembly passed a law declaring a state of emergency on 27 March, expanding police power and limiting civil liberties for 30 days (HRW, 27 March 2022; France24, 27 March 2022). Following this declaration, police raids have been recorded in several neighborhoods, leading to the arrest of around 6,000 gang members last week (France 24, 5 April 2022). During these security operations, activists and journalists have reported multiple police abuses (La Prensa Gráfica, 29 March 2022). On 29 March, a woman activist was beaten and arrested by police in Jiquilisco municipality after she tried to record police actions during a security operation. Human rights organizations have criticized the government’s actions, claiming that the suspension of civil liberties is unjustified (Al Jazeera, 28 March 2022).

In Mexico, ongoing conflict between criminal groups in Michoacán state intensified last week, following a Los Correa gang attack against the CJNG that resulted in the deaths of a CJNG leader and 19 other men in Zinapécuaro municipality on 27 March. The Los Correa gang is a faction of La Familia Michoacana Cartel, which is seeking to retake control of drug production and trafficking routes in Michoacán from the CJNG (El País, 31 March 2022). This attack comes at a time of deadly internal disputes between factions of the CJNG in Michoacán.

Meanwhile, multiple armed clashes were reported in Sinaloa state last week, including a clash between the military and unidentified armed men in Ahome municipality, and fighting between unidentified armed groups on a highway in Culiacán municipality. Additionally, attacks against civilians, mostly perpetrated by gangs, left four people dead in Culiacán municipality. These trends contributed to the 264% increase in violence in Sinaloa last week relative to the past month flagged by ACLED’s Subnational Surge Tracker, which first warned of increased violence to come in Sinaloa last month. Different factions of the Sinaloa Cartel operate in this state, controlling drug trafficking routes that connect to the US (La Razón, 16 December 2021).

In Chiapas state, national guard and police officers dispersed a newly-formed migrant caravan in Tapachula municipality on 1 April, deploying tear gas and clashing with migrants who were heading to the north of the country to cross the US border (DW, 2 April 2022). Several people were injured in the clash, including a journalist covering the event, and more than a hundred migrants were arrested. The formation of the caravan comes after migrants demonstrated throughout last week in Chiapas state, demanding permits that grant them legal status and allow them to move across the country (La Razón, 30 March 2022). These trends contributed to the 122% increase in violence in Chiapas over the past week relative to the past month, as flagged by ACLED’s Subnational Surge Tracker. The clash comes amid heightened state hostility against migrants, with activists accusing migration authorities of failing to issue permits and detaining migrants that already have legal status in Mexico (La Jornada, 31 March 2022). In 2021, Mexican authorities reported the highest records of arrests of migrants since 2005, with over 200,000 arrests and more than 80,000 deportations (Swissinfo, 4 December 2021).

In Trinidad and Tobago, increased levels of violence against civilians by armed suspects drove the 129% increase in violence in the country over the past week relative to the past month that is flagged by ACLED’s Conflict Change Map. Four civilians were killed during attacks last week, with the majority of attacks recorded in Princes Town region and Arima municipality. While violence in Arima has not been common, it has become increasingly volatile, resulting in a shift from a place of ‘low risk’ to being considered an area of ‘growing risk’ by ACLED’s Volatility and Risk Predictability Index. Though perpetrators of these attacks remain unknown, authorities have reported an increase in violence related to gang warfare in the northern part of the country, including in the municipality of Arima (Newsday, 2 December 2021).

In Jamaica, despite a slight reduction in violence last week, attacks against civilians continued at high levels. In Kingston, alleged gang members shot and killed a well-known singer and another man on 29 March. Elsewhere, in Saint James parish, two separate attacks by gunmen left six dead. Such attacks contributed to the 67% increase in violence in Jamaica last month relative to the past year flagged by ACLED’s Conflict Change Map, which first warned of increased violence to come in the country last month. Following the violent incidents in Saint James, police imposed a three-day curfew in the parish, beginning on 1 April (Loop News, 2 April 2022).

In Haiti, demonstrators held multiple days of demonstrations against the government and insecurity in Sud, Sud-Est, and Artibonite departments, as well as in Port-au-Prince, last week. In Les Cayes, Sud department, people held demonstrations for three consecutive days against insecurity and the high prices of airfares. On 29 March, demonstrations turned destructive as rioters blocked an airport runway in Les Cayes and set a small plane on fire. Police intervened, deploying tear gas and firing firearms, killing one rioter and injuring several others. Prime Minister Ariel Henry condemned the destruction and damage that occurred during the riots, demanding that authorities investigate the promoters of the riots (La Croix, 29 March 2022). Air travel has become one of the main means of transport after gangs took control of the only route that connects the southern part of the country to Port-au-Prince (Le Devoirs, 30 March 2022).

Meanwhile, unidentified assailants shot and injured a former deputy who has led demonstrations against insecurity in Port-au-Prince near the Bel-Air neighborhood on 30 March. Relatives of the victim claim that the attack was related to the victim’s denouncement of alleged collusion between gangs and government officers (Le Nouvelliste, 31 March 2022).