Regional Overview: Mexico, Central America, and the Caribbean
23 April-6 May 2022 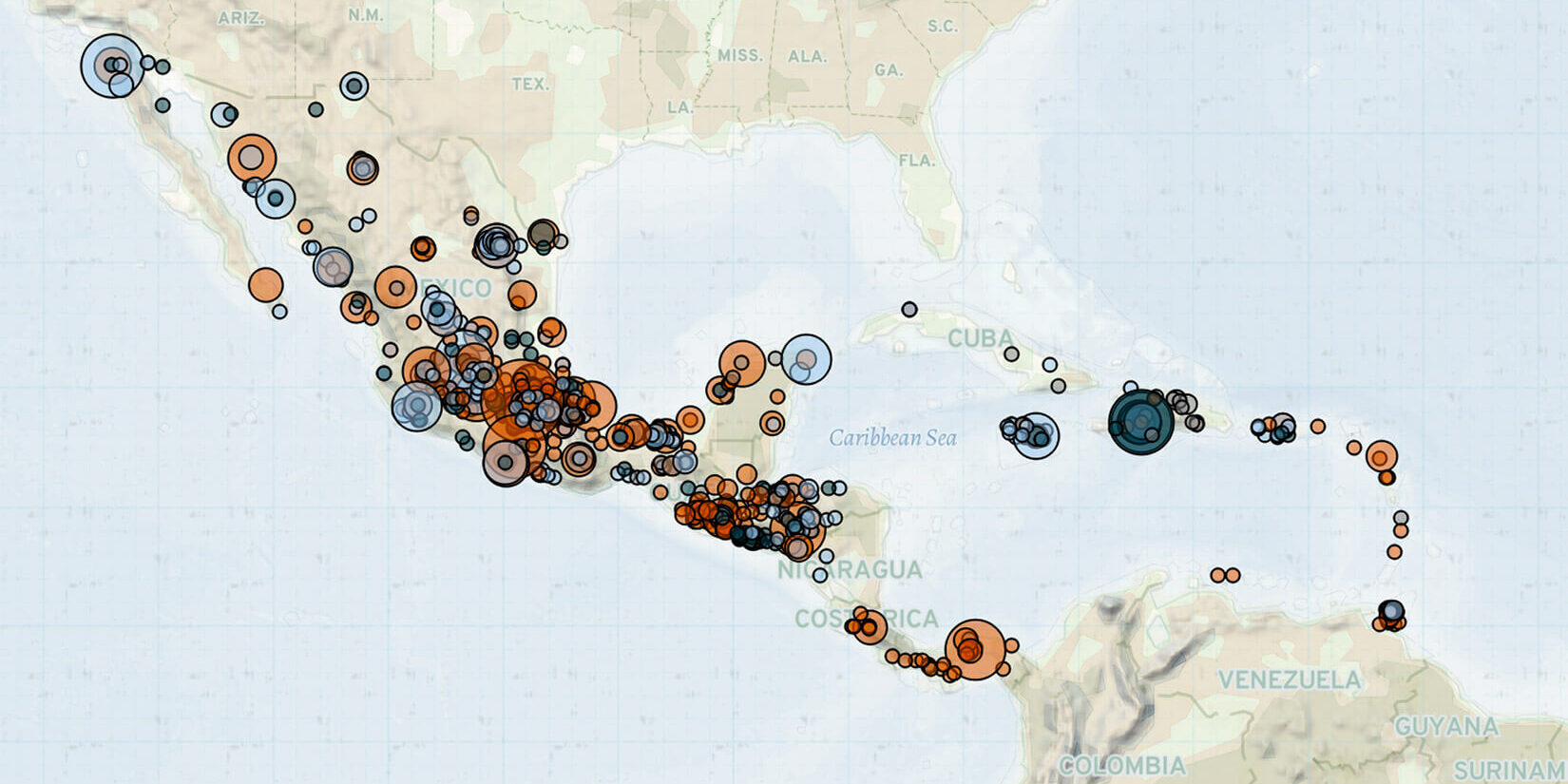 During the past two weeks in Mexico, Central America, and the Caribbean, gang warfare intensified in Haiti and Mexico, while violence against civilians increased in Honduras and Jamaica. In Haiti, dozens of civilians were killed as clashes between the 400 Mawozo gang and the Chien Méchant gang in the northern districts of Ouest department drove increases in political violence. In Mexico, rival criminal groups clashed and blocked roads at the border between Michoacán and Jalisco states, while unidentified assailants killed a journalist in Sinaloa state. Meanwhile, land conflicts intensified in Mexico and Guatemala. On the commemoration of International Workers’ Day on 1 May, labor demonstrations were recorded across the region, while state forces carried out arrests and attacks against activists in Cuba.

In Haiti, members of the 400 Mawozo gang and the Chien Méchant gang clashed in the northern districts of Croix-des-Bouquets, Tabarre, and Cité Soleil in Ouest department. Clashes started on 24 April and continued until 3 May, during which gang members burned down houses, killed civilians, and raped women and girls. According to the UN, 75 civilians were killed during the violence and more than 9,000 residents were displaced to other departments and districts (HPN, 6 May 2022). The escalation of the conflict between these gangs comes after a 400 Mawozo offensive to regain control of neighborhoods and areas that were taken in 2018 by the Chien Méchant gang (Haiti Libre, 28 April 2022). The 400 Mawozo gang has recently expanded its control in the Croix-des-Bouquet district and neighboring areas, making it the dominant gang that controls extortive kidnapping in the area (Alterpress, 10 February 2022). This violence contributed to the 120% increase in violence in Ouest department last month relative to the past year flagged by ACLED’s Subnational Threat Tracker, which first warned of increased violence to come in the country in the past month.

Meanwhile, gang kidnappings of civilians increased with gangs abducting several high-profile victims, including local and international government officials. On 29 April, members of the 400 Mawozo gang kidnapped a Dominican diplomat in Croix-des-Bouquets as he was on his way to cross the border to the Dominican Republic. The gang demanded a ransom of 500,000 dollars and released him four days later under unknown circumstances (BBC, 2 May 2022). Elsewhere, in Saint-Louis du Nord, Nord-Ouest department, armed suspects killed two people and kidnapped an unknown number of children. While violence in Nord-Ouest has not been common, it has become increasingly volatile, resulting in a shift from a place of ‘low risk’ to being considered an area of ‘growing risk’ by ACLED’s Volatility and Risk Predictability Index.

In Mexico, violence intensified along the border between Jalisco and Michoacán states as the Jalisco New Generation Cartel (CJNG) clashed with former allies, the Pajaros Sierra gang. In Jalisco, members of these criminal groups clashed and blocked several roads in Mazamitla and nearby municipalities on 1 May. During the fighting, the CJNG killed 17 members of the Pajaros Sierra gang and abandoned their bodies in an area between Michoacán and Jalisco. The CJNG has since claimed that attacks will continue against the Pajaros Sierra gang, which they accuse of involvement in an attack against a leader of the CJNG (Infobae, 3 May 2022). According to authorities, recent internal divisions of the CJNG have prompted increases in violence in the neighboring states of Jalisco, Michoacán, and Colima, where other local criminal groups dispute control of drug trafficking routes (La Jornada, 28 March 2022). In response to the heightened violence, Jalisco state authorities announced that they would reinforce security at the border (El Informador, 2 May 2022).

Elsewhere, in Sinaloa state, unidentified suspects killed a journalist and left his body in Culiacán. The victim worked for a national media outlet and had criticized local politicians in his writing (France 24, 6 May 2022). Though the circumstances of the killing remain unknown, local media suggest that the journalist was killed after being kidnapped (BBC, 6 May 2022). International and local organizations that advocate for freedom of expression have denounced the failure of Mexican authorities to investigate the attacks against journalists, resulting in most going unpunished (Swissinfo, 21 April 2022). Thus far in 2022, ACLED records a surge in attacks targeting journalists in Mexico, which have resulted in the deaths of at least nine journalists.

Meanwhile, in Chiapas state, members of the self-defense group Regional Organization of Coffee Growers of Ocosingo (ORCAO) carried out attacks against autonomous Zapatista communities in Ocosingo municipality. This led to the displacement of more than 80 members of these rural communities (Desinformémonos, 6 May 2022). In Ocosingo municipality, peasants and self-defense groups are seeking property deeds over lands that members of Zapatista communities claim to control (El Salto, 5 February 2021). While violence in Chiapas has been common, it has become increasingly volatile, resulting in a shift from a place of ‘consistent risk’ to being considered an area of ‘extreme risk’ by ACLED’s Volatility and Risk Predictability Index.

Similarly, in Guatemala, land conflicts reignited in the past two weeks. In Sololá department, armed members of the Nahualá and Santa Catarina Ixtahuacán communities clashed on 29 April, leaving three people dead, including a lawyer. Following this clash, unidentified attackers turned up at Nahuala’s town hall and shot and injured the mayor. Elsewhere, in San Marcos department, armed members of the Tajumulco and Ixchiguan communal militias clashed on 5 May. In both cases, these clashes are part of long-running land conflicts over the definition of municipal borders (La Hora, 6 January 2022; Prensa Libre, 29 January 2022). Intercommunal violence contributed to the 87% increase in violence in Guatemala last week relative to the past month flagged by ACLED’s Conflict Change Map, which first warned of increased violence to come in the country in the past month.

Meanwhile, the Farmers Development Committee (CODECA) led nationwide anti-government demonstrations between 25 and 26 April over corruption-related issues. Members of the organization blocked roads in nearly all departments in the country, calling for the resignation of President Alejandro Giammattei and rejecting the possible re-election of incumbent Attorney General Consuelo Porras. CODECA and other local organizations have accused Porras of intensifying a crackdown on prosecutors investigating corruption schemes, including cases directly linked to President Giammattei (Prensa Comunitaria, 26 April 2022).

In Honduras, gang violence intensified over the past two weeks, driven by armed clashes between gangs and police officers, and attacks on civilians. In Colón department, gang members ambushed and killed three officers in the community of Agua Amarilla on 24 April. Following this clash, President Xiomara Castro declared a state of emergency in the department of Colón — and announced a possible extension to other gang-affected areas — as a measure to fight gang violence (Swissinfo, 25 April 2022). Meanwhile, attacks on civilians by armed suspects and gang members left 15 dead over the past two weeks. Most of these attacks occurred in Francisco Morazán department, where gang members killed an off-duty police officer, triggering further clashes with police in the Ciudad España community. These trends contribute to the 140% increase in violence in Francisco Morazán last week relative to the past month, flagged by ACLED’s Subnational Surge Tracker. The Subnational Tracker first warned of increased violence to come in Francisco Morazán in the past month.

In Jamaica, attacks against civilians remained at high levels across the past two weeks. In Kingston, an attack by gang members on 30 April in the neighborhood of August Town left three men dead. Residents also reported two attacks in which military officers beat three residents, including a pregnant woman, in the Denham Town neighborhood. These incidents come amid security operations by police and military officers in Denham Town, which was designated in October 2021 as a Zone of Special Operations, enlarging military forces’ power to fight criminality in the area (Jamaica Observer, 5 May 2022). These trends contribute to the 121% increase in violence in Kingston last month relative to the past year flagged by ACLED’s Subnational Threat Tracker, which first warned of increased violence to come in Kingston in the past month. Tensions between residents of Denham Town and military forces have remained high following attacks reported in previous weeks. However, authorities have stated that the military will continue to operate in the area (Jamaica Gleaner, 8 February 2022).

In commemoration of International Workers’ Day on 1 May, demonstrations were recorded in Mexico, Costa Rica, Guatemala, El Salvador, Honduras, Panama, and Puerto Rico. In El Salvador, workers protested in San Salvador, demanding improvements in work conditions and justice for the victims of arrests that have been made during the state of emergency declared on 27 March, which are viewed as arbitrary (El Salvador.com, 1 May 2022). The Minister of Labor Rolando Castro condemned the protest, claiming that it violates restrictions imposed during the state of emergency and accuses the protesters of supporting gangs (CNN, 29 April 2022). On 1 May, police set checkpoints in the departments of La Paz, La Libertad, San Salvador, and San Vicente to prevent access to the capital, San Salvador (El Mundo, 1 May 2022).

Meanwhile, in Cuba, police cracked down on journalists and political activists on International Workers’ Day and the lead-up to International Workers’ Day. In Holguín, police detained and beat a woman political activist for unknown reasons on 1 May. The activist reported that she was coming out of her house when the officers took her phone and started to beat her as she yelled anti-government slogans. Days before this attack, three journalists were detained also for unknown reasons in Camaguey and Arroyo Naranjo. While violence in Holguín and Camaguey has not been common, it has become increasingly volatile in both, resulting in a shift from places of ‘low risk’ to being considered areas of ‘growing risk’ by ACLED’s Volatility and Risk Predictability Index. Local organizations claim that these and other acts of repression, which include surveillance of activists’ houses and suspension of internet connections, are part of the government’s actions to prevent demonstrations on 1 May (Infobae, 8 May 2022). Violence targeting activists, especially women activists, in Cuba has been common.