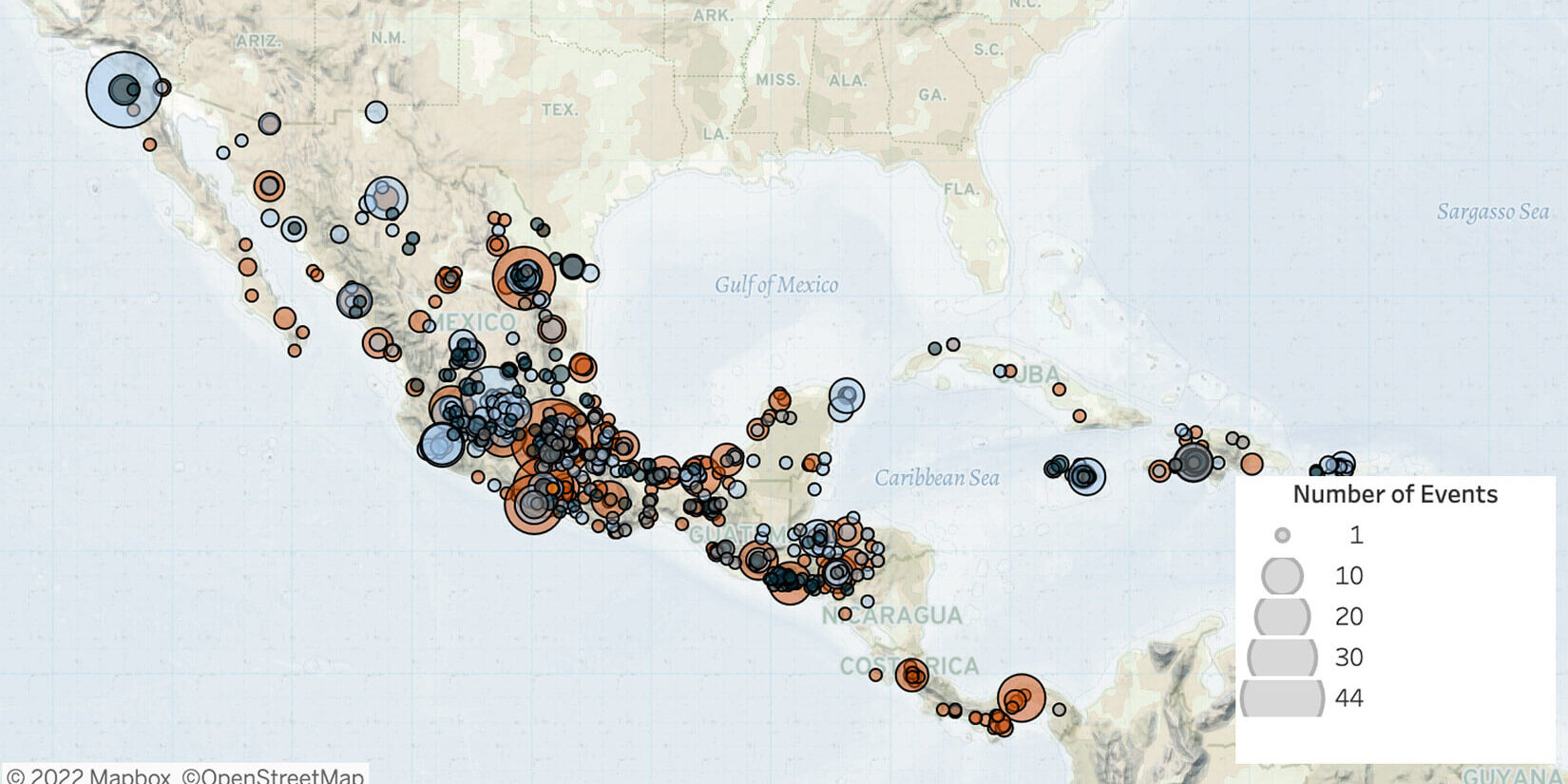 Last week in Mexico, Central America, and the Caribbean, an increase in violence against civilians was driven by gang attacks in Mexico, Honduras, El Salvador, Haiti, and Jamaica. In Mexico, armed suspects shot and killed a journalist and his daughter in Tamaulipas state, while members of the Union of People and Organizations of Guerrero (UPOEG) self-defense group clashed with military officers in Guerrero state. In Honduras, suspected members of pro-government militias from Nicaragua killed a member of the political opposition at the border between Honduras and Nicaragua. In Haiti, a supporter of the Fanmi Lavalas was shot and killed after attending an anti-government demonstration.

In Mexico, targeted attacks against journalists continued last week. Unidentified armed men shot and killed a journalist and injured his daughter outside his house in Ciudad Victoria, Tamaulipas state, on 29 June. The journalist’s daughter died at the hospital a day after the attack. The victim worked for a local newspaper reporting on agricultural and communal issues and had denounced the involvement of state authorities in corruption schemes (Animal Político, 30 June 2022). Following the attack, journalists protested and called for justice in Reynosa and Tampico cities. This attack contributes to the 180% increase in violence in Tamaulipas over the past week relative to the past month, as flagged by ACLED’s Subnational Surge Tracker. Elsewhere, in Morelos state, a police officer physically assaulted a woman journalist as she tried to approach a group of government officials to request an interview. In the first half of 2022, ACLED records an increase in attacks against journalists in Mexico, which have resulted in 12 journalists being killed – more than double the number of journalist fatalities from targeted attacks recorded in the same period in 2021.

In Tabasco and Campeche states, violence against civilians increased last week. In Tabasco, gang attacks resulted in six civilian deaths. Meanwhile, in Campeche, police officers arrested and beat a man to death in Isla Aguada, Carmen municipality. The incident triggered a demonstration by residents who assaulted local government officials and blocked a bridge, demanding the police take responsibility for the killing. These trends contribute to the 100% and 233% increases in violence in Tabasco and Campeche, respectively, over the past week relative to the past month, as flagged by ACLED’s Subnational Surge Tracker.

In Guerrero state, members of the UPOEG self-defense group clashed with military officers in Marquelia municipality. The clash resulted in a UPOEG member being injured and seven others being arrested, including the UPOEG’s coordinator. The arrests were followed by two consecutive days of demonstrations, with truck and bus drivers blocking roads and clashing with police in Acapulco while demanding the release of the prisoners. Additionally, in Chilpancingo municipality, Los Ardillos and the Los Tlacos gang members clashed, resulting in three cargo trucks being burned, while armed suspects killed a community commissioner and another man. According to local authorities, the recent violence recorded in Chilpancingo is related to an ongoing conflict between Los Ardillos, Los Tlacos, and a third unidentified criminal group for the control of extortions and drug trafficking routes (El Universal, 2 July 2022). These trends contribute to the 123% increase in violence in Guerrero over the past month relative to the past year, as flagged by ACLED’s Subnational Threat Tracker.

In Honduras, suspected members of Nicaraguan pro-government militias killed a Nicaraguan political activist last week and abandoned his body in El Paraiso department, at the border with Nicaragua. Though local media report that the victim was killed during a robbery, relatives of the activist reject this narrative, claiming that his body was found with all his belongings and putting the responsibility on President Daniel Ortega’s regime for the killing (Artículo 66, 28 June 2022). The victim had fled Nicaragua after the regime accused him of killing a government supporter during the 2018 anti-government demonstrations; days before he was attacked, he was seen attempting to leave Costa Rica for the US (Infobae, 2 July 2022). Local organizations and representatives of the Costa Rican government denounced threats by regime supporters to Nicaraguan political activists abroad (CNN, 9 November 2021). ACLED has recorded several targeted attacks against opponents of Ortega’s regime outside Nicaragua since ACLED’s coverage started in 2018, mainly reported in Costa Rica.

Elsewhere, gang violence intensified last week in Francisco Morazán and Cortés departments following clashes and attacks related to gang rivalries. In Francisco Morazán, a clash between the Barrio 18 gang and MS-13 resulted in three reported fatalities, while in Cortés, members of MS-13 attacked a group of unaffiliated civilians during a party, killing five. Police speculate that the latter attack could be in retaliation for the killing of an MS-13 member by the Los Aguacates gang that occurred the day before or could be in regards to disputes over the control of local drug markets (La Prensa, 28 June 2022). This violence contributed to the 37% increase in violence in Honduras last week relative to the past month flagged by ACLED’s Conflict Change Map, which first warned of increased violence to come in Honduras in the past month.

In Haiti, armed assailants shot and killed a former political prisoner and member of the Fanmi Lavalas party in Delmas commune, Port-au-Prince, last week. The attack occurred hours after the victim participated in an anti-government demonstration denouncing increasing insecurity and demanding former President Jean Aristide replace current President Ariel Henry, to lead a transitional government (Gazette Haiti, 28 June 2022). Elections for a transitional government have been postponed indefinitely while Henry’s government names a new electoral council and negotiates the conditions for a fair election with his political opposition (Reuters, 8 February 2022). The UN has reported the lack of security and political conditions to hold an election in 2022 (UN, 13 June 2022).

Meanwhile, police arrested the leader of the Base Pilate — a member of the G-9 gang alliance — in Port-au-Prince on 26 June, along with a former police officer who was with the gang leader at the moment of the arrest. The arrest sparked demonstrations where Base Pilate gang members barricaded roads in Port-au-Prince for two consecutive days. Reports also indicate that gunshots were heard during the unrest (Haiti Standard, 27 June 2022).

In El Salvador, clashes between law enforcement and gangs drove an increase in violence last week. In Santa Ana department, three police officers were killed by members of the Barrio 18 Sureños in the La Realidad community. Elsewhere, clashes between police and gangs throughout the week resulted in three gang members being killed and several others arrested. This violence contributed to the 122% increase in violence in El Salvador over the past week relative to the past month that is flagged by ACLED’s Conflict Change Map. President Nayib Bukele stated that authorities must work to find those responsible for the killing of the three police officers and that he will intensify the “war against gangs” (Infobae, 30 June 2022). Local organizations have reported the arrest of more than 43,000 suspected gang members since the government declared a state of siege on 27 March, denouncing some of the arrests as arbitrary (France 24, 29 June 2022).

In Jamaica, violence against civilians and clashes between gangs continued last week, leading to the 33% increase in violence in Jamaica last week relative to the past month flagged by ACLED’s Conflict Change Map, which first warned of increased violence to come in the country in the past month. Attacks by unidentified armed suspects recorded throughout the week resulted in at least eight people dead, most of them occurring in Kingston. Meanwhile, in Saint James parish, armed men shot and killed a member of the Prekeh Gang.