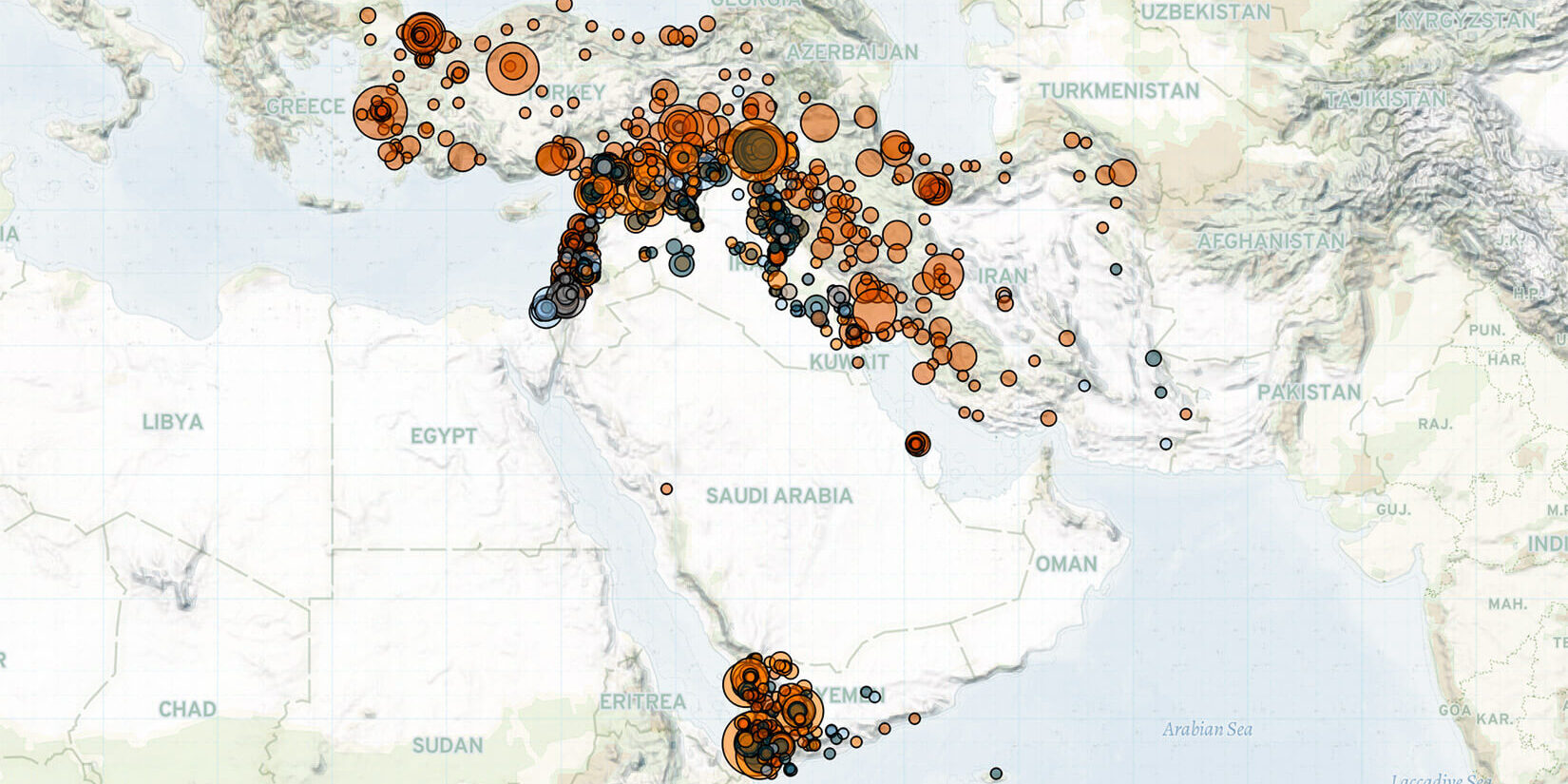 In the last two weeks in the Middle East, political violence levels remained relatively low in Yemen, as the country entered the fourth and fifth weeks of the two-month UN-sponsored truce, which came into effect on 2 April. In Syria, Israel targeted Iranian-backed militias outside Damascus city. In Iraq, the Sinjar Resistance Units (YBS) and the Iraqi army clashed over unauthorized YBS checkpoints. Heightened levels of violence continued in Israel and Palestine amid ongoing clashes between Israeli forces and Palestinians in East Jerusalem and the West Bank. Meanwhile, armed Palestinians launched a deadly attack in the Israeli city of Elad. In Turkey, more than a dozen people were killed in armed clashes between Turkish forces and Kurdistan Workers’ Party (PKK) members. In Lebanon, security forces killed an Islamic State (IS) member after he tried to run them over. In Iran, teachers continued to protest nationwide, demanding greater work benefits.

In Yemen, political violence levels increased slightly during the fourth week of the UN-sponsored truce, with levels remaining stable between the fourth and fifth weeks. Violations of the truce continue to be reported daily, the majority of which continued to be reported in the usual hotspots of Hays axis in Hodeidah governorate, Barh axis in Taizz governorate, and to the south and west of Marib city in Marib governorate. Despite this, there was a shift in the geographic distribution of violence during the past two weeks, with an increase in violations being reported in Hajjah and Sadah governorates (for more on truce violations, see ACLED’s Yemen Truce Monitor). This contributed to increases in violence of 100% and 121%, respectively, last week compared to the past month in Hajjah and Sadah. This is flagged by ACLED’s Subnational Surge Tracker, which first warned of increased violence to come in the former in the past month, as hostilities persist in the governorate since a failed pro-Hadi offensive in February 2022.

Truce violations continue to take place primarily as the result of remote engagement, with reports of armed clashes decreasing over the past two weeks. Conversely, the Hadi-affiliated army claims that Houthi forces carried out an “unprecedented escalation” on 2 May, as they fired four ballistic missiles in separate areas of the country (Yemeni Army, 5 May 2022). On 4 May, a Houthi drone strike also targeted the security administration in Taizz city, injuring both policemen and civilians. Despite these incidents, the past two weeks saw no air raids from coalition fighter jets for the fifth consecutive week, while last week was the sixth consecutive week with no Houthi drone or missile attacks on Saudi Arabia. Local sources, however, claim that Houthi forces deployed missile launchers in border areas last week (Twitter @FaresALhemyari, 6 May 2022).

At the political level, the past two weeks saw several prisoner releases that were welcomed by UN Special Envoy Hans Grundberg (Office of the Special Envoy of the Secretary-General for Yemen, 6 May 2022). These fall short of the large prisoner exchange that was discussed in late March 2022, however, which never eventuated.1The Houthis said that the swap being discussed included 1,400 Houthi fighters and 823 pro-Hadi fighters, including 16 Saudi prisoners and three Sudanese prisoners (Reuters, 28 March 2022). Among those released by Houthi forces was a British national held in Sanaa since April 2017 (Reuters, 24 April 2022). Commercial flights to and from Sanaa are yet to resume, after an initial flight that was scheduled on 24 April was postponed (Associated Press, 24 April 2022).

Meanwhile, reports of Al Qaeda in the Arabian Peninsula (AQAP) activity in the south of Yemen continued to emerge over the past two weeks, following previous reports in early April. On 6 May, suspected AQAP militants killed two prominent southern commanders in clashes in Ad Dali governorate. In late April, AQAP also claims to have organized the Sayun prison jailbreak on 14 April, and to have clashed with Houthi forces in Al Bayda governorate on 22 April (Twitter @Dr_E_Kendall, 28 April 2022).

In Syria, over the past two weeks, Russian airstrikes targeted IS positions in the Syrian desert, particularly in the Al Rasafah desert in Ar-Raqqa province. Meanwhile, the first week of May saw a significant reduction in IS attacks compared to the weekly average in April. During the past two weeks, the overwhelming majority of IS attacks targeted the Syrian Democratic Forces (QSD) and Syrian regime forces in Deir ez Zor province.

Meanwhile, Turkish forces and opposition groups continued shelling Kurdish-held areas in northern Syria and northern Iraq, despite an overall decrease in the number of shelling events in northern Syria during the first week of May. In Syria, shelling focused on People’s Protection Units (YPG) and QSD positions in Afrin, Azaz, and Tall Refaat districts in Aleppo province. In Iraq, Turkey continued the cross-border ‘Claw Lock’ Operation with extensive airstrikes and ground operations targeting PKK militants in several districts in Duhok province and Bradost district in Erbil. The operation contributed to the 133% increase in violence in Duhok last month relative to the past year flagged by ACLED’s Subnational Surge Tracker, which first warned of increased violence to come in the province in the past month. Violence in Duhok is both common and highly volatile; it is considered an area of ‘extreme risk’ by ACLED’s Volatility and Risk Predictability Index. Amid the ongoing operations, hundreds of demonstrators staged anti-’Claw Lock’ protests in Erbil and Sulaymaniyah (Rudaw, 26 April 2022).

In Ninewa, a dispute between the Iraqi army and the PKK-aligned YBS over unauthorized checkpoints resulted in two-days of clashes in Sinjar district. These clashes contributed to the 126% increase in violence in Ninewa last week relative to the past month flagged by ACLED’s Subnational Surge Tracker, which first warned of increased violence to come in the province in the past month. Hundreds of Arab militiamen defected from the Yazidi-majority YBS to protest the clashes (Shafaq, 03 May 2022). Like in Duhok, violence in Ninewa is both common and highly volatile; it too is considered an area of ‘extreme risk’ by ACLED’s Volatility and Risk Predictability Index.

Elsewhere, Iraqi forces launched the second phase of Operation Solid Will against IS targets along the Syria-Iraq border in Al Anbar province. Iraqi forces clashed with IS militants and destroyed multiple IS hideouts and tunnels in the area. Following the conclusion of the Anbar operation, Kirkuk and Diyala provinces experienced a surge in IS attacks, driving the 148% increase in violence in Diyala last week relative to the past month flagged by ACLED’s Subnational Surge Tracker. The Subnational Tracker first warned of increased violence to come in Diyala in the past month.

In Turkey, Turkish soldiers clashed with PKK and PKK Free Women’s Units (YJA STAR) – the PKK’s women’s branch – multiple times in the past two weeks in Sirnak and Hakkari provinces on the Iraqi-Turkish border. At least five PKK members and nine Turkish soldiers were reportedly killed during the fighting. ACLED’s Conflict Change Map first warned of increased violence to come in both Turkey and Iraq in the past month.

​​In the past two weeks in Palestine, Israeli police forces clashed with Palestinian worshippers in the Al Aqsa Compound in East Jerusalem, while three Palestinian rioters and an Israeli settler were killed during deadly violence in the West Bank. In East Jerusalem, Israeli forces clashed with Palestinian rioters in the Al Aqsa Compound on 29 April and again on 5 May, Israel’s Independence Day, leaving dozens of people injured. On 29 April, Israeli police forces entered the compound and clashed with Palestinians after they began lighting fireworks and throwing rocks towards the Western Wall. On 5 May, Palestinian rioters clashed again with the Israeli police after they entered the compound to provide protection for 950 Israeli Jews visiting the site for Independence Day celebrations (Jerusalem Post, 5 May 2022). Tensions have heightened in Al Aqsa over the last month as the Muslim Ramadan and the Jewish Passover holy periods coincided, reaching a high point three weeks ago when Israel and Hamas briefly increased military hostilities.

In the West Bank, three Palestinians and an Israeli were killed during clashes over the past two weeks. The three Palestinians were killed during clashes between Israeli security forces and Palestinian rioters in the Aqabat Jabr refugee camp, the Jenin area, and Azzun village. Meanwhile, two Palestinian gunmen killed a settler working as a security guard at the entrance of Ariel settlement. Hamas claimed the attack followed the attackers’ arrests by Israeli forces (Haaretz, 29 April 2022). This violence contributed to the 33% increase in violence in Palestine last month relative to the past year flagged by ACLED’s Conflict Change Map, which first warned of increased violence to come in the country in the past month.

In Israel, two armed Palestinians carried out an ax attack last week in the town of Elad on Israel’s Independence Day, killing three Israelis and injuring four others. The attack is the latest in a series of lethal attacks carried out by Palestinians or Israeli Arabs that began last March. Other attacks have taken place in Beersheba, Hadera, Beni Brak, and Tel Aviv.

In Lebanon, state forces shot and killed an IS member on 27 April, after he tried to run them over during a failed arrest operation in Wadi Khaled. This is the first time ACLED records an armed clash between IS and Lebanese forces since 27 September 2020.

In Iran, the protest movement organized by the Coordinating Council of Teachers Syndicates continued with nationwide protests on 1 May to commemorate International Workers’ Day. The protesters demand the implementation of a salary ranking plan and pension payment equalization. Police attempted to disperse the demonstrations and made arrests in the cities of Marivan, Bandar e Bushehr, and Mashhad.